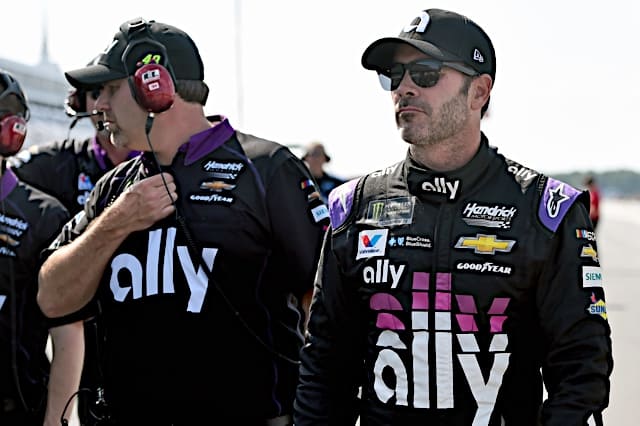 Michael Massie: I’d still say Stewart because of the two more championships and because he took a leap of faith to start his own team and went on to win races and championships for himself. Joe Gibbs Racing was also not a championship-winning team until Stewart got there. Kevin Harvick, on the other hand, has only driven for teams that had already won championships.

Wesley Coburn: Stewart, because of his transition from an IndyCar champion into a multi-time champion in stock cars. Also, Stewart started his own team (with which he won) at the top level of the discipline, which Harvick hasn’t done. Harvick had to fill the shoes of possibly the most famous NASCAR driver in history, so his success is also impressive, it’s just not quite as impressive as what Smoke has done.

Clayton Caldwell: Stewart, because I value championships, and Harvick only has one. Now, you have to consider that Harvick spent most of his career at Richard Childress Racing, so that could have hurt his chances at a championship, but he still only has one. Harvick has had a great career, and if he can get a championship or two more before he retires, he could certainly have a more impressive resume than Stewart.

Adam Cheek: Stewart, for now. He has the three titles to his name, as well as being an arguably bolder figure in the sport’s history. Not to say that Harvick hasn’t proved himself to be an icon, though. Stewart’s legacy, between his titles, prowess as a driver and team ownership, is just a lot to overcome.

Amy Henderson: I know the question says NASCAR resume, but I don’t feel like you can separate all of Stewart’s accomplishments that easily. Wins are a huge part of a driver’s legacy, but it’s hard to overlook Stewart’s three titles to Harvick’s one. Now, should Harvick win a lot more races than Stewart and another championship or two, it might make for a better comparison. Add in Stewart’s IndyCar title and USAC Triple Crown, though, and he’s not just one of the NASCAR greats, but also one of the racing greats, period.

Matt McLaughlin: The early part of Harvick’s career has been overlooked and in some quarters even resented. Yeah, it was the No. 29 and not the No. 3, and it was white rather than black, but that was Dale Earnhardt’s ride, and Harvick wasn’t worthy of carrying the late Intimidator’s shoes. Over time, Harvick became a successful journeyman driver. He had some issues maturing and could get a bit churlish, which didn’t help build his fan base any. NASCAR had to park him a few times — though to be fair, if you compare Harvick’s plays-nicely-with-others grades to Stewart’s, he looks like Marcia Brady. Stewart has to punch a fan in the face these days to get a couple hours’ ink. But overall, Stewart has more titles, more wins and has gone on to be a successful promoter at Eldora Speedway. He’s also won at multiple disciplines of racing and is a successful team owner, unlike Harvick, who is pretty much a one trick pony. When Stewart announced he was joining Gene Haas to start a Cup team, I figured if he hated money that much he could send me a sack of it and throw the rest in a burn barrel. That was one of two times I was wrong in that decade. I decided I didn’t like it and haven’t been wrong since.

With Jimmie Johnson on the outside of the Cup playoffs looking in, would it be the biggest surprise ever in terms of drivers missing the postseason? If not, who holds that distinction?

Henderson: How about Harvick missing the first edition in 2004? After finishing fifth in points in ’03, Harvick struggled in ’04, eventually missing a playoff spot (it was the top 10 at the time) and eventually finishing 14th in points without a single win. It wasn’t his worst season, but it was a disappointing one for the young driver.

Cheek: I would say so. There have been big names that missed out before, but Jimmie Johnson’s streak of playoff contention and his recent struggles have really highlighted him.

Massie: Joey Logano missing it in 2017 is the biggest surprise because he won a race that season before he was disqualified and was a championship contender in the years bookending that season. Johnson is in the twilight of his career, but Logano was right there in the prime, and for whatever reason just had a random bad season. And it’s much easier to make the playoffs now than it was when Stewart and Jeff Gordon missed them in the 2000s, so Logano gets the edge on that, too.

Coburn: If Johnson misses, it won’t really be that shocking, considering his downward slide the past few years. Kyle Busch missing in 2009 is the biggest surprise.

McLaughlin: Oh, jeez. Will Johnson make the playoffs or will the sun stop rising tomorrow? Who cares? As hapless as Johnson and the No. 48 bunch are as of late, if he does make the playoffs somehow and advances even a single round, that would be the biggest surprise in NASCAR history.

The second stage of the Gander Outdoors Truck Series race at Michigan International Speedway only ran green for nine of the 20 laps. How should NASCAR solve this issue?

McLaughlin: First and foremost, get rid of the damn stages. Counterintuitively, stop counting yellow flag laps during all three portions of the race.

Coburn: It seems like the race usually goes green about seven laps into a stage; if that could be cut to around four laps, it might be better.

Henderson: NASCAR shouldn’t. Let the race play out. Stage or no, that’s the way it wen’t down. Super simple.

Massie: Caution laps should not count during stages. Also, NASCAR spends way too much time under caution as it is. Maybe if it had a choose cone instead of its horrible scoring system, we wouldn’t waste so many laps.

Cheek: Either make the stages longer or limit the number of laps for which a caution counts. No one wants to see half the stage run under caution.

Noah Gragson once again ruffled some feathers with his behavior and social media posts this week. Is it a kid having harmless fun, or should JR Motorsports management get involved in some way?

Caldwell: Social media is a dangerous tool, but I like when people act like themselves. That’s what makes it fun, to see the different personalities out there. Not everyone has to like what someone posts, and if they don’t like it, then don’t follow it, period. I hear fans complain all the time that drivers like Johnson are too vanilla and none of the drivers these days have personalities. Then I see a question like this and scratch my head and say, well, no wonder these guys don’t, because if they show a bit of personality, they get crucified for it.

Massie: Noah Gragson is still a kid who has had a ton of attention thrown on him too quickly. He will grow out of this phase, and I don’t want JRM to put restrictions on him and filter his personality like Hendrick Motorsports did to Johnson early in his career. But until Gragson grows up a little, he should ask someone at JRM or even just a friend or family member whether or not he should post something on social media.

McLaughlin: To quote Babs in Animal House, “That boy is a P-I-G, pig.” I have little tolerance for political correctness, but if Gragson is trying to be offensive, loathsome and misogynistic, he’s doing a Humphrey Bogart-worthy job of acting the part. But we’ll always have Vegas. Noah’s ark departed from Vegas, where he was born 21 years ago. That explains a lot.

Cheek: JRM should be involved to a degree; he’s a young guy, and a simple reprimand or short talking-to would be enough. It’s not a good look for Gragson, but JRM handling it right away should do the trick.

Henderson: Someone needs to sit him down and have a talk with him about his behavior — not to throttle it, but to make sure he understands the consequences of his online presence and the repercussions it could have to the organization. If this is the driver being groomed for the No. 48, he needs to act the part now. They don’t need to throttle him completely, but there are some things that would be better left unposted whether you’re in the spotlight or not. The video he posted was one of those things; it was creepy no matter who posted it. Rule of thumb: ask yourself whether something like that should be posted, and then realize that if you have to ask, it shouldn’t.

Stewart without a doubt. And just for the record I never liked either of them.

Gordon and Stewart definitely. They were both still running well overall, were still in the middle of their career and ran strong both before and after missing. Johnson is definitely at the end of his career and hasn’t been running that great even before he won that last championship in 2016.

The stages suck. They have killed green flag pit stops and overall strategy at several tracks because knowing when a caution is going to fall is not a good thing for competition. Here is an idea; If they MUST have stages don’t treat it like a caution at all. They can stop the race for their precious commercial and award points and interview the winner, but no one can pit (if they do it’s a one lap penalty) and the laps run during the stage break don’t count.

The only thing that should be made clear to rookies with respect to social media is that they should be very careful what the say. It’s very easy to say something that is misconstrued and, when that happens, if it is controversial and upsets enough people the sponsor will force them to remove the driver. So, go out on social media and say whatever you want, just be aware that if you say the wrong thing, it’s your ass.

Also, regarding #2, when Stewart and Gordon missed the playoffs there were only 10 spots (or had it been changed to 12 by then) while there have been 16 for the last several. Had their only been 10 Johnson’s streak would already have been over. As many of us have pointed out in other articles, 16 is a really stupid number given that there are only 20 or so top tier teams.

Can’t speak for the drivers but I certainly plan on missing the “playoffs”.

Austin Dillon missing the playoffs is a shocker for sure, especially for grandpa. It’s Bristol and Austin already took grandpa’s plane home in stage two.