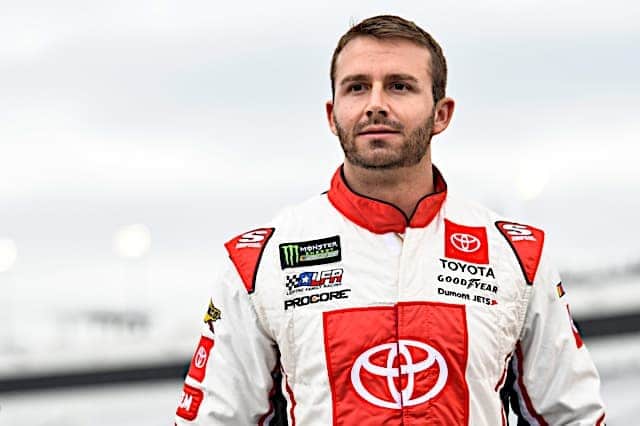 Despite giving Leavine Family Racing its best season to date, Matt DiBenedetto won’t be returning to the team for a second season in 2020.

“I got the devastating news that I will not be able to return to Leavine Family Racing next season,” DiBenedetto said in Twitter statement on Thursday (Aug. 15). “Nonetheless, I can’t express how thankful I am for Bob [Leavine], Sharon [Leavine], Matt Diliberto and everyone at LFR and Toyota for allowing me to do exactly what I set out to do, which was showcase my talent. It’s been exciting for us as a team to get top fives, top 10s and lead the most laps in the Daytona 500.”

Over the past eight races, DiBenedetto has four top-10 finishes, including a season-high fourth at Sonoma Raceway. His other top five came at New Hampshire Motor Speedway, with top 10s at Daytona International Speedway and Watkins Glen International.

Through 23 races, the No. 95 team sits 23rd in the championship standings, needing to win one of the next three races (Bristol Motor Speedway, Darlington Raceway and Indianapolis Motor Speedway) to make the playoffs.

“I have every intention of driving my heart out the rest of the season to not only get more of these kinds of finishes, but to get them their first win,” DiBenedetto added. “I would love to do that for them. Although this is a difficult time for me, nothing is going to stop me from winning in the NASCAR Cup Series. I’m hopeful there is a team out there that will give me the chance to continue my dream and allow me to win for them.”

This season alone DiBenedetto has equaled the amount of top 10s he had in his first 140 starts in the Cup Series, while earning LFR its most top-10 finishes in a single season.

LFR has not announced its replacement for DiBenedetto, though various rumors have put Christopher Bell in the car for 2020.

Absolutely hate this for Matty D. It’s obviously a business decision, and while Christopher Bell certainly deserves a Cup ride, I hate that it came at Matt’s expense. While I have no doubt he will find another ride, I hope it’s a quality ride because Matt is a wheelman and a fan favorite. On top of that, his work ethic and positive attitude will make any team better. Matt, if you’re reading this, the fans support you!!

Maybe takes a seat at Front Row Racing? I still thought they would replace Denny Hamlin and he would take Fed Ex to Stewart Haas and replace Clint Boyer. Don’t let me choose your stocks or lottery numbers!

Well, would the 1 be open or a similar car then lol???

Well I think LFR has lost me as a fan

This is a shame and just shows how heartless professional sports can be. I hope he lands somewhere good.

With David Ragan going part-time, maybe there is a full-time ride available at Front Row. It’s not as good as LFR, but it’s not bad. RPM is behind FRM, don’t see RCR dropping Dillon or Hemric, or Germain dropping Ty Dillon (unless they switched to Toyota–which would be a huge change considering their alliance with RCR). If Kurt Busch doesn’t return to Ganassi, I have to think Ross Chastain goes to the #1. Would SHR drop Bowyer for Matt? I think Matt is superior at this point, but would they not go with Cole Custer if they dropped Clint? I think FRM is the best landing legitimately possible, unless JGR puts him in a full-time Xfinity ride. I think Matt could get a few top 10’s a year with FRM and challenge for top 5’s, even more than McDowell and Ragan have/do.

Joe Gibbs. The runner of small teams. I see his finger prints all over this situation.

Why do I feel Gibbs dirty paws all over this? Jesus Joe and company make me vomit.