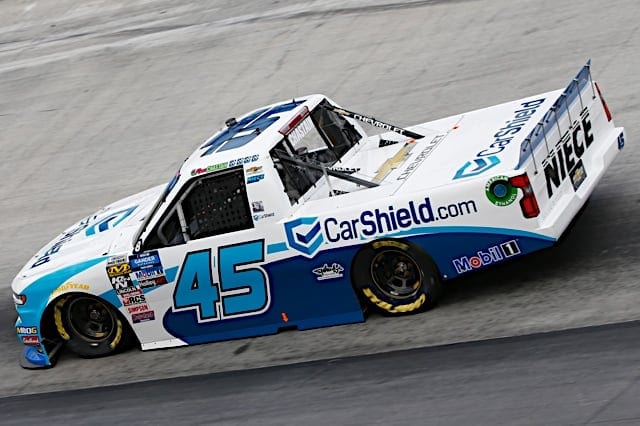 Whenever Ross Chastain has qualified well this season in the Gander Outdoors Truck Series, he typically runs at the front, if not wins the race. On Thursday (Aug. 15) at Bristol Motor Speedway, he qualified second and was among the fastest trucks.

Chastain battled with Brett Moffitt early on for the lead before winning the first stage. In the second stage, it was once again the Nos. 24 and 45 battling for the playoff point, though this time Moffitt came out on top.

Following the conclusion of the second stage is where Chastain’s race took a turn for the worse, as the No. 45 Chevrolet was penalized for a safety violation with a crew member’s hand hitting the ground to retrieve a tire. Ultimately, Chastain was sent to the rear of the field.

When the green flag waved, Chastain quickly maneuvered his way through the field to the top 10. But the race was halted seven times during the final 80 circuits, including a red flag on lap 189. All the stoppage, and for the most part having to restart on the inside, hindered Chastain from ever regaining the lead. Once the race resumed, the inside was the preferred line.

“They’ve taken away the top,” Chastain said after the race. “The middle groove was a good for a lap or two and then you had to get back down. It’s old Bristol. They’ve got us back down on the bottom. They’ve taken it away and our truck was good enough even in dirty air to drive to their left rear and get position.

“I gave guys breaks at the beginning, but once we got that penalty I had to get back up there and was fighting for my career, fighting for my guys, fighting for everything. When you have the fastest race truck you can’t just ride in line. It’s what filled this place up 40 years ago and we have to fill it back up.”

Chastain took the checkered flag in third position, behind Moffitt and Chandler Smith, finishing a career-best second. In the process, Chastain knows he made a couple enemies, spinning Raphael Lessard out with less than 25 laps remaining, as well as battling hard with Sheldon Creed late.

“Everybody gets their dang feelings hurt when you race them hard,” Chastain added. “I know that was down the line, I felt like he turned left on me on one of those restarts, I might have been up a little bit but it put me in a bad spot. I got position on him again and he turned left, and I don’t know who’s on the outside of him, but I know I’m not turning left onto the apron more than I’m already heading to.

“I’m not going to lift. It’s a few more laps left in Bristol. We’re back on the bottom. We’re back knocking each other out of the way and I’m the first one since they grounded the top to be in the spotlight for it. It’s going to happen a lot more now.”

By leading the most laps (78), scoring 19 stage points and a third-place finish, Chastain had a good points night in terms of the playoffs. Though he didn’t win, he doesn’t see finishing third as a missed opportunity.

“It’s just part of it,” he said. “You’re going to have that in big time NASCAR racing. We keep bringing fast trucks like this. It’s a dream come true to be driving these things, just to race here at Bristol. I wish we could have raced with Brett.”

The Truck Series heads to Canadian Tire Motorsport Park next week (Sun, Aug. 25) where Chastain has one career start, finishing seventh in 2013.