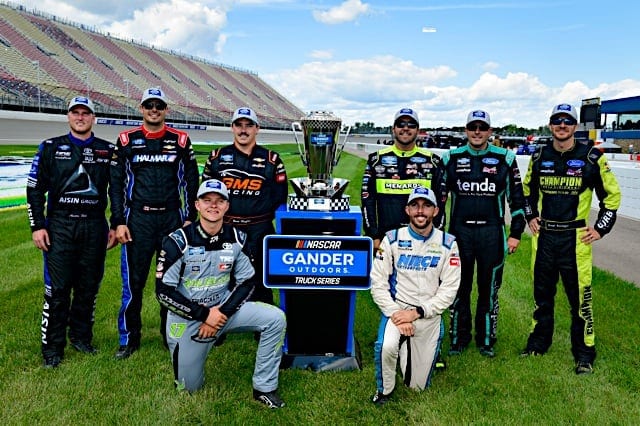 The defending champion likely enters the postseason as an automatic favorite simply because he’s done the playoffs thing and won it all the most recently out of any of the contenders. Ousted from his championship-winning ride in favor of Austin Hill, Moffitt landed in the ride Johnny Sauter ran during the 2018 season.

Growing pains of joining a new team left Moffitt out of victory lane until two races after he inherited the win at Iowa Speedway, where Ross Chastain‘s truck was found to be illegal in post-race inspection. But since the win at Chicagoland Speedway, Moffitt’s only finish outside the top 10 came at Eldora Speedway. Given that he scored two wins and seven top fives in the final seven races last season, look for Moffitt to come out swinging.

While he hasn’t visited victory lane yet this season, Enfinger has been no worse than second in the standings since he opened the year with a runner-up finish at Daytona International Speedway. In fact, in the first 11 races of the year, he finished outside the top 10 just once (11th – Las Vegas Motor Speedway).

Consistent and steady, it’s not like Enfinger hasn’t shown he has the capability to win; the team just hasn’t put him in the right position at the right time. He has the second-best average finish of the playoff contenders this season at 7.6 and has shown plenty of ability to take care of his equipment and really push when the time is right. If Enfinger can grab a win in these next three races, don’t be surprised to see him make his way to the Championship 4.

For much of this season, it’s almost been a waiting game of guessing and wondering when Friesen would finally make his way to victory lane. Every time he looked like he had the speed, something would happen, whether it was a penalty, a mistake (Pocono Raceway, anyone?) or getting caught up in another driver’s mess. But that win finally came at Eldora Speedway just one race after finishing dead last at Pocono.

What’s rather impressive about Friesen’s numbers so far this season is that nearly all of his top 10s are actually top-five results. In fact, in five of the last seven races, he’s ended up no worse than fifth, and even then one of those was the eighth-place run at Michigan International Speedway. Assuming Friesen can stay out of his own way during the playoffs, now that he’s got that first win monkey off his back, he can easily turn into a huge threat for the title, especially with GMS backing on his side.

He essentially notched his spot in the playoffs with a win in the season-opener at Daytona. Big deal, right? Someone had to win that race. But the big deal is that Hill, who had consistently been showing improvement at Young’s Motorsports throughout the 2018 season, had just been tapped to fill the No. 16 Toyota that had won the championship with Moffitt. Talk about big shoes to fill for a driver who had yet to find victory lane.

Fast forward through an only okay season and Hill found himself deep in the top 10 in points. The victory to close out the regular season last Saturday at Michigan was more than just a win. Instead, it was a momentum shift for a driver who’d struggled in recent weeks with either crashes or mechanical failures. Also, remember that Hill holds the tiebreaker with Chastain should it come down to that over the next three races.

There’s not a lot to say about Chastain’s season that hasn’t been said already. He won at Kansas Speedway while he was declared for Xfinity Series points, and just days later, he and Niece Motorsports announced he would switch to run for the Truck Series championship. Starting at square one with zero points, it was an uphill battle with a team that no one even expected to see in victory lane this year, much less one that would compete for the title.

Following the win that was stripped at Iowa, Chastain went to World Wide Technology Raceway at Gateway the following week and won, this time with a truck that was declared legal in post-race inspection. After making it into the top 20 in points, Chastain was officially eligible for the playoffs, but it wasn’t until he stomped the field at Pocono that it was clear he would run for the championship.

Does anyone else wonder how many watermelons the team will smash if they manage to make it all the way to the Championship 4 and win it all?

Despite being locked out of victory lane since 2017, Crafton is one of three ThorSport Racing trucks in this year’s playoffs. One thing the two-time champion has done, though, is to continue to be one of the most consistent drivers week after week. He boasts the highest average finish at 7.2 and managed to put himself in position to point his way into the playoffs, though there were several intense moments for the No. 88 team at Michigan as those below the cut line for the playoffs led laps and threatened for the win.

Crafton does maintain the distinction as the only driver to win back-to-back championships in the Truck Series, though that was accomplished before the introduction of the playoffs. He’s one of just two drivers (Sauter is the other) to have made the playoffs in all four seasons. Crafton made it to the Championship 4 in 2016 and 2017 before ultimately finishing second and fourth, respectively, so he definitely has the experience to make the most of his postseason appearance. The biggest question mark that remains is if he and crew chief Junior Joiner can turn their consistency into race wins.

In January, Sauter found he was out of the No. 24 Chevrolet at GMS Racing in favor of Moffitt and wasn’t even sure if he would race full-time this season. Enter ThorSport, the organization he’s spent the majority of his Truck Series career racing for. It certainly hasn’t been the strong multi-win season 2018 was for Sauter, and his team has been hit with what seems like a substantial amount of bad luck.

The thing that could end up holding Sauter back, though, is his temper. A driver as passionate and dedicated as Sauter tends to overreact when things don’t quite go his way. Need an example? Look no further than the intentional wreck he delivered to Hill at Iowa that left him sidelined the following race. If he can keep his emotions in line, Sauter has the experience to make a long run to the Championship 4.

When this season began, no one expected Tyler Ankrum’s name to even be in the championship conversation. Sure, he’s had success in lower series, but coming in with an organization that was not a proven winner, combined with being a rookie who couldn’t even run the first three races because he wasn’t old enough, left the 18-year-old as an afterthought — well, until Kentucky Speedway at least. His fuel cell outlasted Moffitt’s, and Ankrum was able to hang on for his lone win.

This season hasn’t been without its challenges, though. Just one race after scoring his first career top five with a third-place run at Texas Motor Speedway, Ankrum didn’t have enough sponsorship to remain behind the wheel of the No. 17 Toyota. But he kept his playoff hopes alive by entering a start-and-park NEMCO Motorsports truck for two races before returning to his ride at DGR-Crosley.