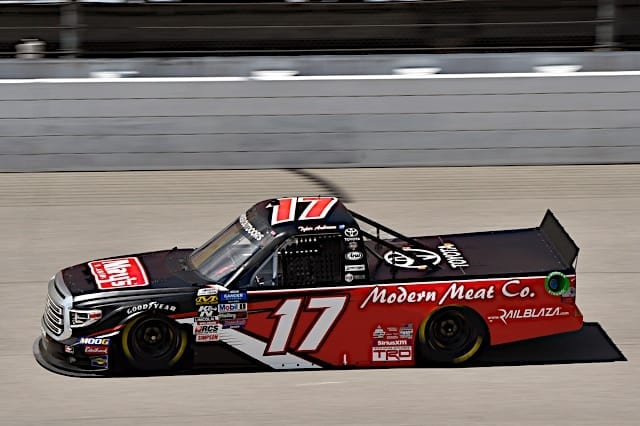 Matt Crafton, who enters the playoffs with the best average finishing position of the entire field this season, was third on the board (125.354 mph). Raphael Lessard (125.036 mph) and Brett Moffitt (124.930 mph) rounded out the top five.

Sam Mayer, making his debut for GMS Racing was sixth on the board. Johnny Sauter, Sheldon Creed, Grant Enfinger and Stewart Friesen rounded out the top 10.

The only playoff driver outside the top 10 on single-lap speed was Austin Hill, who was mired back in 18th. Making a rare start for Henderson Motorsports, Parker Kligerman was 17th quickest.

Out of the 15 drivers to make a run of at least 10 consecutive laps, Creed was quickest at 123.983 mph. Ankrum was the only playoff driver to make such a run.

Despite being the lowest playoff driver in opening practice, Austin Hill led the way in final practice, looking for back-to-back wins via his win at Michian last week. The No. 16 turned a hot lap of 126.328 mph, just beating out Mayer (126.096 mph) for the top spot.

The two playoff drivers outside the top 10 in final practice were Enfinger, who was 12th on the scoring pylon, under two-tenths off the quick lap from Hill. Chastain, on the other hand, was down in 20th.