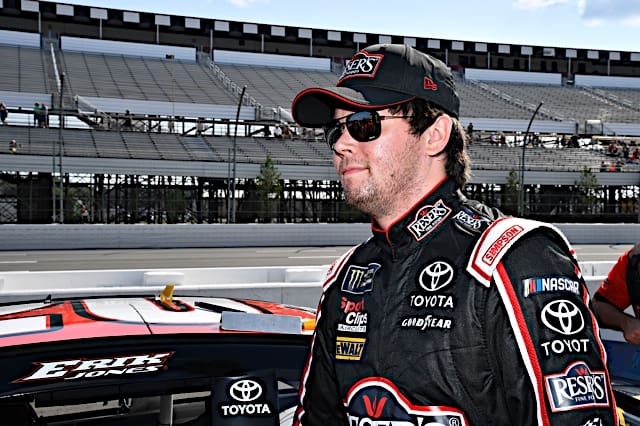 Are you ready for some short-track racing, where calamity lurks at every corner? It’s Bristol, baby!

The Monster Energy NASCAR Cup Series heads to Bristol Motor Speedway for the Bass Pro Shops NRA Night Race on Saturday (Aug. 17) at 7:30 p.m. ET. The “sticky stuff” is back on the track, this time in the lower groove, and the cars will use the higher horsepower package without aero ducts. It’s a much smaller track than where they’ve been running recently- just over a half-mile. There’s not a whole lot of room at the Last Great Coliseum, and with the Cup playoffs drawing near, the intensity on the track will be near its highest. Make sure you acknowledge the risks before you lock in your lineups. Also, check before the race in case any drivers fail pre-race tech inspection; this could affect your fantasy roster.

Since there are 500 laps in this race, you will have plenty of opportunities to earn bonus DraftKings points. Remember, each lap led is worth .25 points, which means there are 125 bonus points available for this category. Many drivers had several fastest laps in April’s race, but it definitely can boost your fantasy score with 250 points available. Finally, remember that drivers that are historically quick (or showed speed in practice) and qualify mid-low pack could be worth their DraftKings salary.

Yes, Busch is the most expensive driver in the field, but you should still consider him for Saturday night’s race. There’s no one else among his competitors who has as many wins at this track. In fact, he took the trophy in three of the previous four Bristol races, including April’s race. The wheelman of the No. 18 Joe Gibbs Racing Toyota has one of the fastest cars, even though he starts 31st. That was more than likely because he was the first driver to qualify. Since he’s starting so far back, he might not lead many laps, but he can certainly earn you positive place differential points.

Logano is another driver who’s had success recently at this short track. Out of the past 10 races, he only finished outside the top 10 twice. The Team Penske racer finished third in the Spring and fourth in this event last season. Additionally, he’s led a total of 764 laps in his Cup Series career here, including 241 laps in the past two races. Logano had a fast car in first practice, posting the best 10-consecutive lap average. He’s slated to begin Saturday night’s race 11th, which isn’t too far back for his speedy vehicle. Look for him to aggressively race his way to the front and lead some laps.

That Jones boy is really inexpensive, considering the prices of his fellow JGR peers. Although he does have limited experience at Bristol, he has two top fives. He’s shown speed all year but just hasn’t capitalized the opportunity. Jones is hungry for his second Cup win, and Saturday night could just be his night.

Before last week’s 18th place ending at Michigan International Speedway, Jones was riding a four-race top five streak. With such high finishes comes higher fantasy points, and he has the capacity to finish well again. He’s set to start the race ninth, so he isn’t too far back to pass those in front of him. Also, his practice speeds were great; he had the second-quickest 10-lap average time behind Ryan Blaney in the final session.

Buescher has been on a hot streak this season. The No. 37 JTG-Daugherty Racing driver hasn’t finished outside the top 20 since Kansas Speedway, which is remarkable for this smaller team. He is reasonably priced and could easily earn 40-plus DraftKings points, should he finish near the front. Though his only top five came in 2016, he proved last week that his team can find the right tempo to race with the big dogs. He just needs to avoid the mayhem that tends to abound at BMS.

The seven-time Cup champion has had a rough year so far. Johnson and his team even changed crew chiefs a couple of weeks ago, hoping to get back on the right track. Could he find his footing at Bristol? Well, he does have two victories, and has only finished outside the top 10 twice in the previous 10 races here. Where have you heard that before? Logano had the same amount of top 10 finishes as Johnson. What’s surprising is that he has a lower price than Buescher. Johnson has a much better history here and since he qualified 30th, he can earn you many DraftKings points, provided that he stays out of trouble.

Guido has had a rough week, after he announced Leavine Family Racing would not have him back next year. Even though this is bad news, he could still turn it to a positive note at Bristol. DiBenedetto earned a sixth-place position in 2016 after starting 30th, and finished 12th in the Spring race earlier this season. Additionally, he has two top fives and four top 10s since the race at Sonoma Raceway in June. One of those came at New Hampshire, where he started seventh and ended the event fifth. Finally, he had the fastest single lap time and the third-quickest 10 consecutive lap average in final practice. He’s a bit more risky since he qualified seventh, but as long as he avoids calamity, he could still perform well.

I think it’s probably been since the last Daytona race that I included a driver in this price range. The main reason Ty Dillon is my Dark Horse driver is because he has good potential to finish higher than he begins. In fact, two of his six races run at BMS resulted in 15th-place finishes: in 2017 and earlier this year. The Germain Racing driver earned DraftKings users 41 fantasy points in that April 2019 event. He’s only started in the 20s-lower 30s, but can weave his way through messes on the racetrack to finish in the upper pack. Also, he finished 11th last week at Michigan after beginning the race 21st. Since he is cheap, he could help you fit someone like Kyle Busch in your roster.