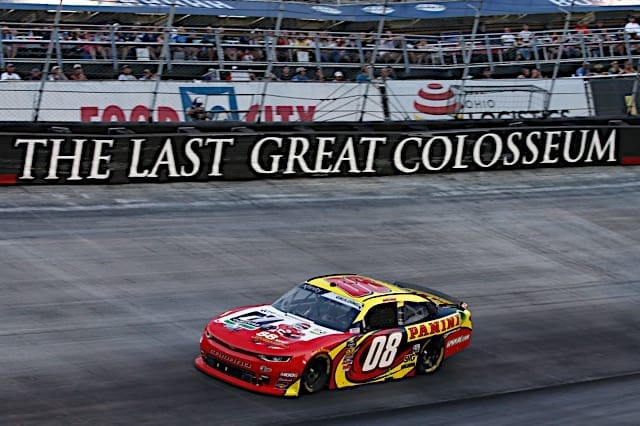 Gray Gaulding survived a wild night in his most unique paint scheme to date to finish sixth in the Food City 300 at Bristol Motor Speedway on Friday night (Aug. 16).

While the run wasn’t Gaulding’s career-best NASCAR Xfinity Series finish — he was runner-up at Talladega Superspeedway earlier this season — it was his best finish to date at a non-superspeedway.

“It feels unbelievable,” Gaulding said. “You know, I always knew we could do it. We struggled a little bit in practice, but we made some really good changes after final practice yesterday. And I knew once this place got cooled down and it’d be under the lights, I thought we’d have a good race car.”

Gaulding ran the race with Kansas City Chief quarterback and reigning NFL MVP Patrick Mahomes II and on his hood, as the trading card company Panini America was his sponsor.

“If You Ain't First You're Last.” S/o to @graygaulding for wrapping the #08 car with me & @paniniamerica fam. We’ll be auctioning off this hood for @15andMahomies. #donruss pic.twitter.com/tF2KIoaJww

“We were up in the top 10 most of the night,” Gaulding said. “And we’re just a small organization, and to be able to show up to Bristol with all the heat and all the competition that were here this evening and to be able to showcase that, finish sixth, have Patrick Mahomes on the hood, which is really cool, that promotion we’re doing with the NFL along with NASCAR.

“It was really cool to have a strong run, and that’s what we wanted to do. We wanted to showcase to these people [Panini] when we come to these tracks, we can do it.”

Gaulding said he needs to have Mahomes on the car every week now.

“I’m a little bit superstitious,” Gaulding said. “I’m going to have to talk to Patrick and work something out because a lot of good things happened this week. We got a lot of press out of having him on the car.”

The good run was a result of speed and luck. Several of the top drivers fell out early in the running and he survived the mayhem.

“I think a lot of good things happened tonight,” Gaulding said. “Normally, I feel like we’re on the other side of the stick. Like, I had a loose wheel in the first stage and then the caution came out and we were able to pit and not go a lap down. Because I was going to have to come down pit road under green, and that would have killed our night. The Good Lord was with us.”

Gaulding still sits 13th in points, a long ways out of the playoffs, but still, 2019 has been a career year for the 21-year-old.

“Man, a lot of good things are going on right now in my life, and I’m just very fortunate to be able to come here and finish top 10 and celebrate,” Gaulding said.