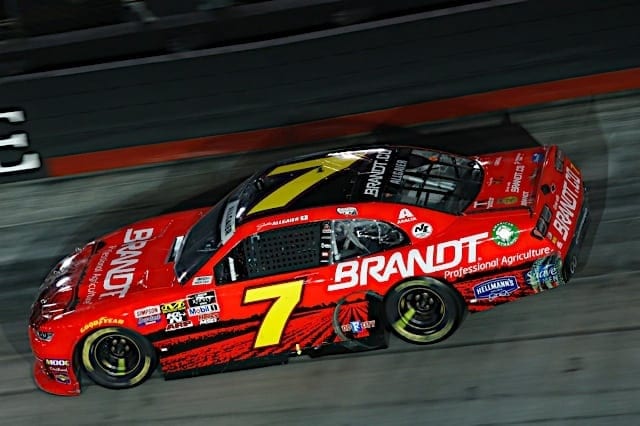 If Justin Allgaier has proved anything in 2019, it’s that he’s damn good at Bristol Motor Speedway. However, the No. 7 team has nothing to show for it.

Allgaier was a factor from the drop of the rag, battling door-to-door with Kyle Busch for the lead. In the opening stage, he was leading with a few laps to go until Tyler Reddick lost control under the No. 7 Chevrolet, allowing Brandon Jones to get by for the stage win.

In stage two, Allgaier finished third behind Busch and Reddick. But the stage became wide open when the No. 18 blew an engine coming to the checkers at the end of the stage. When the race resumed, Allgaier was in the catbird seat, taking control of the race.

The No. 7 would lead 131 laps, but with less than 10 circuits remaining Allgaier cut down a tire entering turn one, having to make a pit stop. When the checkers flew, he finished a disappointing eighth, two laps down.

“I’m not even sure the word disappointment begins to describe, not even this race but this year, this place,” Allgaier said after the race. “This was my favorite place to come and race at.

“This one is going to hurt for a while. We had the best car there at the end, I don’t know if we could have beat Kyle early on, he was really good. We don’t know where the [Nos.] 20, 12 and 00 would have been at. Super disappointed. There’s no words that even can describe what happened.”

In the spring race at Bristol, Allgaier led a race-138 laps until a front hub burnt on the No. 7 car, forcing him to go behind the wall. The same problem happened to his JR Motorsports teammate Jeb Burton on Friday night (Aug. 16). But this one hurt even worse for the Illinois native, who was in position to capture his first victory of 2019.

Even with a rash of late race cautions, and some of his closest competition pitting, Allgaier pulled away from the field, believing that tires weren’t the problem, until his went down.

“Without warning, I felt going down the front straightaway, I had a tire maybe going down, it was hard to tell,” Allgaier added. “I checked up getting into [turn] 1 and as soon as I turned off in, it went straight up the hill and at that point you’re just a passenger. There aren’t words to even begin to describe this night and how frustrating this is.

“We drove away from them. I have to look at the tire, I don’t know if it was cut or if it was worn out. With as little as tire wear as we’re seeing with this hard of a tire – they weren’t going to catch me at the end. That pace we had there at the end on that last restart, there’s no way they were going to catch me.”

Coming off a career year in 2018 — despite getting bounced in the playoffs in the Round of 8 — Allgaier hasn’t found victory lane in almost an entire calendar year. In 22 races this season, the No. 7 team has nine top-five finishes and 14 top 10s. On the flip side, Allgaier has led 416 laps and no victories.

Allgaier believes Bristol was the perfect example of how his season has gone.

“Tonight’s a perfect example of how our year has gone,” he stated. “I don’t know what to do any different. Hats off to the guys at the shop. They built a great racecar, it was obvious we had a really fast car, just nothing to show for it again at Bristol.”

The series heads to Road America next Sunday (Aug. 25) where he’s the defending winner of the event.