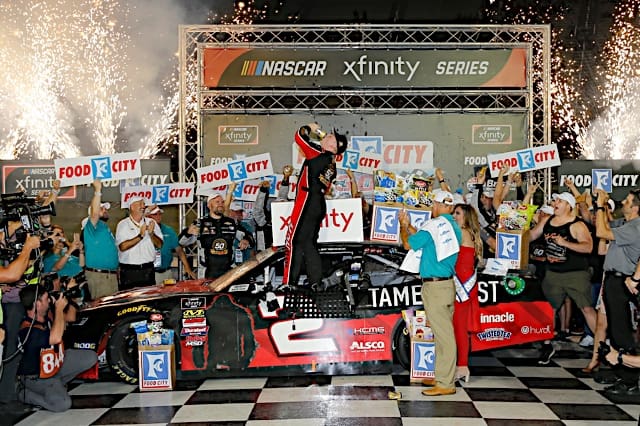 Reddick started in the back after failing inspection four times, NASCAR also requiring that the 2018 series champion take a pass-through penalty under green-flag conditions.

Full moon fever seemed to set in immediately, with a four-car incident erasing the chances of four of the night’s top contenders. The lapped No. 5 of Matt Mills squeezed Cole Custer into the wall as he and Christopher Bell battled for a top-five spot, sending Custer sliding into Bell. The two careened into the following turn, where Erik Jones and Joey Logano also piled in.

After the cleanup and the green flag dropped once again, John Hunter Nemechek ran into issues with a flat tire. He half-spun and saved the car after a lot of restart contact, but was tagged in the back by CJ McLaughlin and wound up spinning again a straightaway later. That second spin was right in front of leader Kyle Busch, who was nearly sandwiched into the outside wall.

A long slide by @JHNemechek in front of the leaders brings us back to caution speeds. pic.twitter.com/Cw3HvczDUu

Justin Allgaier eventually snatched the lead from Busch, battling with the No. 18 for a few laps before taking the lead on lap 61.

The wild night continued with an action-packed end to the stage, as Reddick had rebounded into second place behind Allgaier. Reddick closed in but drove too deep into the corner, making some contact with the JR Motorsports driver and causing both cars to slide. Reddick spun out, while Allgaier saved his car from contact with the wall. Third-place Brandon Jones drove past both cars, winning the stage under the ensuing caution by virtue of that incident.

Stage two saw what was probably the weirdest incident of the night’s insanity, when Ronnie Bassett Jr. completely lost a wheel going into the turn – once again, in front of Kyle Busch – and spun in a cloud of smoke. Bassett’s entire wheel assembly exited the chassis, sending his No. 90 Chevrolet into the barrels at the end of the pit wall, leading to a short red flag period.

The red flag is displayed for this incident involving the No. 90. pic.twitter.com/ai9njluUs9

The oddities didn’t stop there. Busch won the stage after appearing to have a brief tire rub, but it turned out it was his engine letting go. According to Busch, the engine began to have issues with about six laps left in the stage. By the time he crossed the line, the motor completely blew, and Busch went from winning the stage to sitting in the garage within a minute or two.

.@BMSupdates claims another victim.@KyleBusch takes his machine behind the wall to end his night. pic.twitter.com/4QIDjVUar6

Midway through the final stage, a Michael Annett spin brought out a caution. Allgaier’s crew decided to play strategy and stay out, while Reddick pitted and got his car ready for a final checkered-flag push. Ryan Sieg’s No. 39 ran in the second position for a while, too, before he got into the wall and had a tire rub that forced him to pit and ultimately retire for the night.

In the final 10 laps, Allgaier had a significant lead on Reddick, but heartbreak struck the No. 7 team when their Brandt Agriculture Chevrolet had a tire begin to go down on them. JR Motorsports did finish with Allgaier and Annett inside the top 10, however, after a weekend that began with a scare when team owner Dale Earnhardt Jr.’s plane crashed in Tennessee.

Reddick capitalized on Allgaier’s misfortune, blowing by the slowing No. 7 en route to a victory, his fourth of the season. He sits just behind Bell and Custer, who each have five wins, for the most in 2019.

The series will next head to Road America in Wisconsin for the CTECH Manufacturing 180, which will kick off on Saturday, Aug. 24 at 3 p.m.