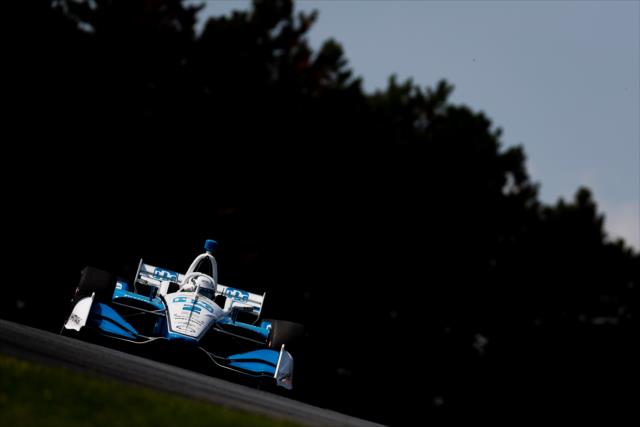 It’s nearing crunch time in the NTT IndyCar Series title chase, and each one of the four championship contenders will be looking to make the most of this weekend’s stop at the Tricky Triangle.

With just four rounds left on the schedule – including this weekend at Pocono Raceway – Scott Dixon is trying to make a comeback for the ages after finding himself nearly 100 points behind points leader Josef Newgarden just one round ago.

"You just don't get it back, but that's what makes the sport what it is." @JosefNewgarden has his regrets about @Mid_Ohio, but he's ready to bounce back at @PoconoRaceway ?#ABCSupply500 // #INDYCAR pic.twitter.com/OMMdhhxrUH

Fortunately for Dixon – and the other two title rivals – Newgarden made a rare mistake at Mid-Ohio, essentially throwing away 20 points and a fourth-place finish on the last lap of the race. So instead of a 40-point stranglehold on the championship, we’ve now got a four-man dash to Laguna Seca.

Pocono presents a prime opportunity for all three of the 2019 Champion’s challengers. Dixon won the race back in 2013, while Alexander Rossi, who is looming just 16 points back, ran away with the win last year. Simon Pagenaud, meanwhile, dominated at the track most similar to the “oval”– the Indianapolis Motor Speedway – earlier this year. Back in May, the Frenchman won the pole and led 116 laps on his way to winning the Borg-Warner Trophy, making him the odds on favorite to leave Pennsylvania with another win to his name.

Unfortunately for the three in pursuit of the points lead, Newgarden has been able to bounce-back mightily from his few misfortunes this year.

After finishing 15th at the IndyCar Grand Prix, the Nashville-native followed up with a fourth -lace in the Indianapolis 500 and a win in the first dual at the Detroit Grand Prix. Sunday in Detroit didn’t go quite as well for the Team Penske driver – he finished the second dual back in 19th–but he rebounded the next week by winning at Texas Motor Speedway.

With the rain-aided benefit of starting from the pole, Newgarden’s in prime position to do the same this weekend. He’s assuredly wants to put his rookie-mistake at Mid-Ohio in the rear-view mirror and is gutsy as any driver on the grid, so expect the former champ to be as motivated as ever to find victory lane.

Cars have been sent back to the garage ?

Newgarden caught a break thanks to Mother Nature, as Saturday morning showers washed out the entirety of qualifying. With the field set by points, he’ll lead the field to the green flag and hope he doesn’t get swallowed up on the long Pocono frontstretch by the hard-chargers lining up behind him.

While it serves as an advantage for Newgarden to start in P1, most of the benefit is wiped out by the fact that Rossi will be starting directly alongside him. He’ll also undoubtedly have his mirrors full with Dixon and Pagenaud looming behind him in the second row.

While the rain-soaked morning meant no qualifying session, the paddock was still able to get plenty of track time. Instead of maintaining two separate practice sessions, the series opted to hold one two-hour practice on Saturday afternoon, giving teams ample time to work on a race setup.

Once the track dried and cars hit the pavement, it was Tony Kanaan who emerged atop the time charts, laying down a lap at 216.354 mph–almost half a mile per hour faster than Dixon, who was the next guy on the sheets. The Mid-Ohio winner was followed closely by Dale Coyne Racing’s Santino Ferrucci, who ended the session in P3 in his No. 19 Honda.

Rossi wasn’t too far behind this year’s Indianapolis 500 Rookie of the Year, ending the day P4 on the charts and sending a message to his championship opponents in the process. Pagenaud, also looking to capitalize this weekend, drew upon a bit of his Indianapolis magic, ending the session in fifth with a lap of just over 215.3 mph.

Newgarden, however, didn’t look worthy of his prime starting position. The points-leader managed to put down just the 17th quickest lap of the afternoon, meaning he could sink like a rock once the green flag drops on Sunday.

This weekend is all about whether Newgarden can recover from his devastating unforced error at Mid-Ohio or if Rossi, Pagenaud or Dixon can take advantage of the now wide-open window that resulted from it. The clock is ticking on the season and opportunities like these will be harder and harder to come by, so a win this weekend for any of the four contenders could prove to be the turning point in the closing stages of the season.

While everyone will be keeping an eye on what’s playing out in the points standings, there will still be plenty of action away from the championship battle. Conor Daly is stepping back into the No. 59 Carlin Chevrolet this weekend, returning to the seat after notching a solid 13th-place finish in his last appearance at Iowa Speedway. The start will be his fourth on the season, which includes a top 10 at the Indianapolis 500 earlier this year. Another solid finish could prove to be beneficial in his pursuit of a full time seat next season.

While they’re no longer in the hunt for the title, there are a few drivers that could still use a win, if nothing for more than a confidence boost. Will Power is still searching for his first win of the year despite already having three poles to his name. The former champ has undoubtedly been the weak link at Team Penske this season, where seats are known to get very hot, very quickly. Another win at the 2.5-mile superspeedway could go a long way toward maintaining job security.

Ryan Hunter-Reay, although just sixth in the points standings, hasn’t had a spectacular year. The Andretti-Autosport driver has only two podiums on the season and is quickly becoming second fiddle to his teammate in the No. 27. While a victory for Hunter-Reay wouldn’t necessarily usurp Rossi’s status as the number one driver on the team, it could fend off some of the retirement talk that could be in his near future.

Sunday’s pre-race coverage begins at 2 p.m. ET on NBCSN, with the green flag expected to drop around 2:45 ET. Live streaming is available on the NBC Sports App with a cable subscription.