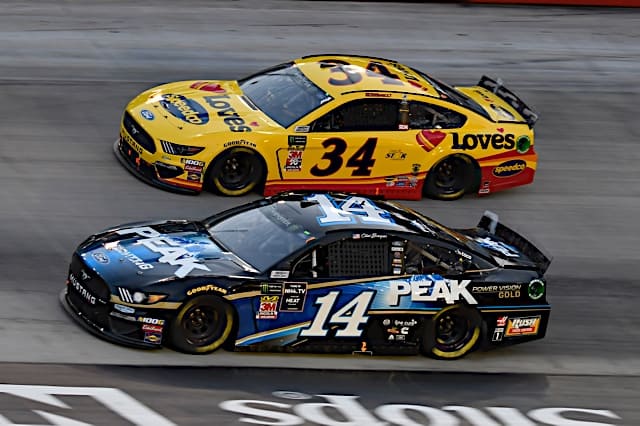 The 2019 season, prior to the Bass Pro Shops/NRA Night Race at Bristol Motor Speedway, had not been kind to Clint Bowyer. Good fortune finally turned Bowyer’s way on Saturday night (Aug. 17), and he came away with seventh place.

“All in all, it’s a good weekend for us,” Bowyer said. “It was kind of a rebound weekend, what we needed. But you can’t expect those guys to just lay over for you. We did all we could do. I was hoping to be a top-five car. When you’re a top-five car, you’ve got a chance to win. But we were just off on that all night.”

The top 10 was Bowyer’s first in the last five races and second in the last 10. He has had six DNFs this season, with four coming in a nine-race span. Since the June Pocono race, Bowyer had plummeted from 10th in points to 16th.

Bowyer actually dropped to 17th in points following the Bristol top 10 due to Daniel Suarez outscoring him in stage points, but the finish was a step in the right direction for the No. 14 team.

“For the month that we’ve had and to finally get a top 10, at least a decent run under your belts in these last two races, it’s fine,” Bowyer said.

Bowyer said he doesn’t have time to worry about points while racing on short tracks.

“We had a good race. Man, we were too loose,” Bowyer said. “We needed more rear grip all night long. That’s probably the loosest I’ve ever been here. We fought front turn all weekend long and were trying to make up for it with wedge out and track bar up, stuff like that, and that just hurts rear grip.”

Bowyer flirted with disaster in the race, as he came down on Quin Houff and spun out in front of the field. But nobody ran into Bowyer, as Suarez narrowly avoided him.

“It’s short track racing. You’re making split-decisions,” Bowyer said. “I was trying to pass those two cars and get some more stage points for us, and I clipped him. It was nothing he did. I was just trying to shoot the gap and I had a run on those guys and was trying to do all I could do.”

Another bullet Bowyer dodged is Matt DiBenedetto, who Denny Hamlin passed for the lead late for the win. Had DiBenedetto won, then one less driver would get into the playoffs on points. It would have been that much harder for Bowyer to get into the postseason. But Bowyer didn’t see it that way.

“I hate that for that guy,” Bowyer said. “He’s racing for a job and everything else. You know those Gibbs car are fast, you know he was gonna have a rocket, and he did.”

The No. 14 team still has their work cut out for them over the next two races if they are going to make the playoffs. Bowyer trails Suarez by two points and needs to either keep being consistent or win.

“[We need to] just go race,” Bowyer said. “We need to perform the way we can perform and do our thing. … It’s mistakes, if the driver don’t make mistakes or bad call, you get caught up on the bad side of a pit stop or get wiped out. Just things aren’t going our way. But a lot of them can be helped.”

Austin Dillon raced as good as he possibly could, just like Bowyer. Why ignore him. Grandpa is going to start paying him on a sliding scale depending on where he finishes. No paycheck at Bristol and he has to pay for his own bus ride home.