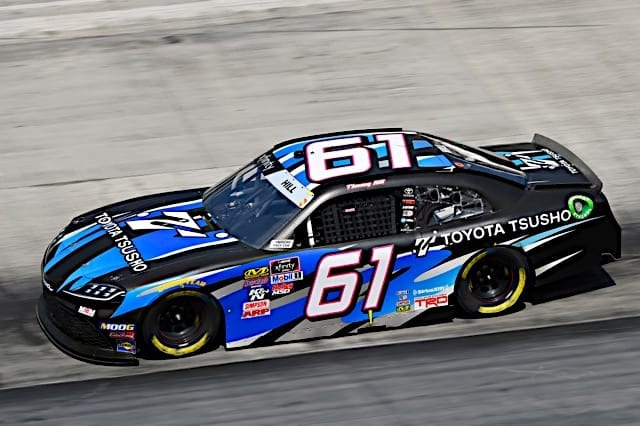 When the checkered flag waived for the Food City 300 at Bristol Motor Speedway on Friday night (Aug. 16), no one expected to see Timmy Hill in the top 10. And yet, there he was.

Hill survived the carnage of the night and finished seventh, matching his career-best finish in the NASCAR Xfinity Series. He’s now finished seventh three times, with the other two coming at Daytona International Speedway. It was his fourth career NXS top 10 and first of 2019.

“It’s a great feeling,” Hill said. “It’s my best finish other than a superspeedway, and seventh matches my best. Bristol’s always best a great track for me, and I’m glad we could put on a great finish here.”

Hill normally drives for MBM Motorsports but for this race MBM teamed with Hattori Racing Enterprises, the defending championship team in the Gander Outdoors Truck Series. Instead of running a No. 42 this week, MBM’s ran No. 61, which was the number Hattori used when it attempted Daytona earlier this season.

“They gave me a great car, one I could have a lot of fun with, and Bristol’s one of those tracks where you just got to keep your fenders clean, and that’s what we were able to do all night. We didn’t make any mistakes — these guys, they gave a fun car to drive and we came out with a great finish.

“This collaboration came together this week, and it couldn’t have kicked off any better than it did. These guys really work well together … I think all the results really showed tonight.”

Hill was the top finishing Toyota at Bristol. While Hill did benefit from the likes of Kyle Busch, Christopher Bell, and Erik and Brandon Jones all having problems, he showed plenty of speed on his own.

“I say this week was a good driving car [making the difference],” Hill said. “Most of the time when you get these things driving really good in the corners, you can make up a lot of time. So I found myself running with a lot of bigger teams that normally we can’t run with. HRE and MBM coming into collaboration together, I think that really worked well and gave me a better effort this week.

“You never want to count on any bad luck on the competition, but it makes it easier on you as a driver — a couple cars less to fight at the end. Some of those guys, I felt like we were better than anyways, but it certainly helps.”

The finish was MBM’s second-ever top 10, both have come with Hill. The team definitely benefitted from extra funding this week, as it could afford new tires.

“I think [the collaboration] allowed us to really compare notes and get a better idea of what each other’s mindset was going into this,” Hill said. “It also gave us tires for this race that we normally don’t have. Normally, we’re running on 40- or 50-lap scuff tires. It certainly helped tonight as well to have some fresh tires to put on.”

While Hill isn’t sure how many more times the two teams will collaborate, he indicated that this was not a one-off.

“Hopefully, after tonight’s run, we can put our heads together and see what we can come up with,” Hill said.