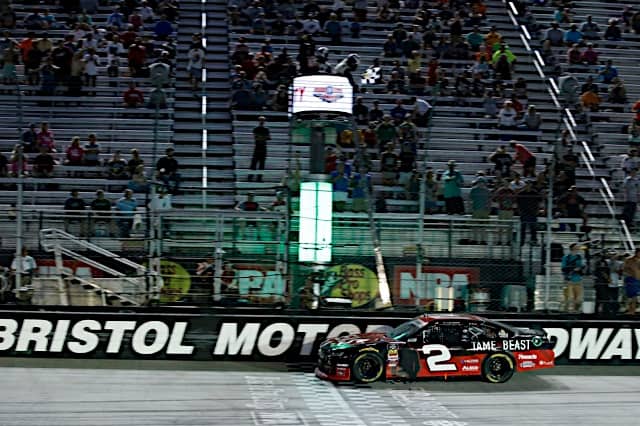 When a common reaction to a race is something along the lines of “now I’ve seen it all,” that’s usually a good sign.

The Food City 300 at Bristol Motor Speedway did indeed have a little bit of everything, including an early wreck that took out a handful of favorites, an exploding tire, a stage winner who immediately went to the garage with a blown engine and a late, somewhat heartbreaking plot twist.

So it’s only right that the eventual winner had his own panel in that crazy quilt of events, starting from the rear of the field and going a lap down right away after a pass-through penalty for failing pre-qualifying inspection four times, which is the kind of thing that happens when you fail pre-race inspection multiple times.

Of his four 2019 victories — already double what he managed while winning the Xfinity Series championship last year — this might have been the most impressive for Tyler Reddick and his Richard Childress Racing team because of the way it combined speed, perseverance and an uncanny knack for being in the right place to take advantage of the misfortune of others.

And despite all that, Reddick being Reddick almost cost him a chance at the win before the first stage ended.

Reddick was battling Justin Allgaier for the lead and trying the inside groove, which Xfinity Series fans know is not typically his preferred line. It didn’t work out well.

But what’s starting from 24th and getting to the front when you’ve already made it there from 28th? Reddick finished runner-up in stage two to Kyle Busch, who was already smoking when he took the green and white checkers and soon learned his day was done. That handed the lead over to the No. 2 car, but he was the hunter and not the hunted for a good chunk of the final stage.

With just under 80 laps to go, Reddick’s team made what could have been the call of the race when it elected to bring him in for their last set of tires after a spin by Michael Annett brought out the caution flag. Most of the lead lap cars followed suit, but Allgaier and three others did not.

The new rubber didn’t turn Reddick into Superman, however, and it was Allgaier, especially after acing another restart with less than 20 laps to go, who appeared to have the car to beat.

Then Bristol things started happening again. Brandon Jones, who had made a thrilling move to split Reddick and another car to make it to second place, got too high and into the wall. And Allgaier, who had to have thought he had experienced every bad break possible already, found out the hard way that wasn’t quite true.

His tire problem with just 11 laps to go turned the lead over to the car running second, and sure enough, that was the one driven by Reddick.

Even he couldn’t quite seem to believe it.

“I don’t know,” Reddick said when asked after climbing out of his Chevrolet how he pulled off the improbable win. “I thought I made the wrong adjustment there on the last stop. … We had fresher tires than Justin Allgaier there, and we came down pit road and we just got too tight. I thought we were done for, and then I don’t know what happened.”

What happened is Reddick silenced the whispers about whether or not there is still a Big Three with the regular season coming to a close. Christopher Bell and Cole Custer both have five wins to Reddick’s four, but the defending champ has closed the gap in playoff points which was starting to widen. If Bristol taught us anything amid all the chaos, it’s that it would be silly to count him out.

Some of the more entertaining aspects of the Food City 300 have their own sections in this column, but it’s worth mentioning some of them here anyway. The Cup Series stars didn’t hog the spotlight, which definitely could have happened since there were several of them entered for the first time in a while. But the Bristol bug bit them all, and none were around for the finish.

When the race was in its war of attrition phase early on, it meant that some of the underfunded cars were caught up in the carnage. Others weren’t, however, and the top 10 featured several drivers grabbing some of their best results of the season.

That said, maybe the best part of Friday night’s race was that it was something of an endorsement of “new” Bristol. There’s been plenty of justifiable debate about whether the old, one-groove Bristol, which often required moving cars out of the way to pass, was actually superior to the track as it currently races, as just about everything possible has been done to make multiple grooves viable.

As it turns out, The Last Great Colosseum can look different from night to night, because while the Truck Series race on Thursday resembled old Bristol and was thrilling in its own right, the Xfinity Series race saw cars able to go high, low and even right up the middle when needed. It certainly wasn’t lacking for excitement or drama, giving some hope that the Monster Energy NASCAR Cup Series event to cap off the weekend will follow suit.

How snakebitten can one driver be over the course of a single season? Allgaier continues to find out the hard way.

Bristol might have been the biggest gut-punch of all, not only because Allgaier has won there before (though it’s been a while — 2010, to be exact), but because his No. 7 Chevrolet passed the eye test in ways it rarely has this season. Allgaier looked like he was able to run as fast or faster than anyone until his tire problem so close to the finish left him with what had to be the most depressing eighth-place finish in recent memory.

“I don’t know how you process it, I’ll be honest with you,” Allgaier said while Reddick was celebrating in victory lane. “Just the story of the year. … I don’t know if we could’ve beaten the 18, apples to apples, but when he fell out, especially at the end there, I thought we had the best car.”

He was probably right. We’ll never know if the call to have him stay out on those older tires so long contributed to the issue that doomed him, but that’s going to be haunting the back of his mind for a while.

Just like Reddick needed speed and luck to align on Friday night, it’s becoming increasingly clear that Allgaier will need the same to happen to pull out of his funk.

ALBINO: JUSTIN ALLGAIER: ‘THIS IS GOING TO HURT FOR A WHILE’

Lapped cars sometimes get flak they don’t deserve. Other times, they end up setting off a chain reaction that just happens to take out the two top Xfinity Series title contenders and two Cup Series stars in one fell swoop.

Matt Mills certainly didn’t intend to come to Bristol and end up Public Enemy No. 1, but that became his fate when he squeezed Custer into the outside wall, bouncing him back down into Bell and collecting Erik Jones and Joey Logano just for good measure.

A huge, race-changing crash takes out multiple favorites for the night! pic.twitter.com/ktjtWhQ8fU

For what it’s worth, Mills owned up to his part in the accident, with the NBCSN broadcast replaying his words on the radio admitting that it was all his fault. That wasn’t enough for an angry Custer, who originally subtweeted that he “got wrecked by a guy who shouldn’t even be out there” before deleting it and offering a semi-apology later.

Also ugly in its own right was whatever happened to Ronnie Bassett Jr., who lost not a tire but the entire wheel off his No. 90 Chevrolet.

A bizarre incident at @BMSUpdates, right in front of the leader Kyle Busch. TV: NBCSN. pic.twitter.com/4UypPeb5p7

Busch narrowly missed the wheel, but his close call there may have been a bit of a harbinger of what awaited him later.

Much of the night, it looked like perennial top dog Ryan Sieg might claim this honor again, but after he fell victim to his own bad mojo, three underdogs proudly picked up the banner and carried it home to top-10 finishes.

That trio was led by Jeremy Clements, whose fourth-place run was his first top five since he won at Road America in 2017. It was also a career-best short track result.

Not far behind was Gray Gaulding, coming home sixth for his third top 10 of 2019 — and first outside a superspeedway. And Timmy Hill tied his best ever Xfinity Series finish in seventh, the first time he has cracked the top 10 in a race not held at Daytona.

If you had said before the Food City 300 that you didn’t think Busch, Logano or Jones would be around to challenge for the win, you would have raised some eyebrows… but you would have been right on the money.

Logano and Jones both suffered enough damage in the Mills-Custer-Bell tango that they couldn’t continue, with only Mason Diaz preventing one of them from finishing dead last. Busch, meanwhile, looked like the class of the field (though not totally untouchable as he often does when making an Xfinity Series start) until the ending on his Toyota gave out right after he won stage two.

So, uh, bring on the Cup Series drivers any time, right?

“Sometimes I just don’t know when to hold back a little bit.” – Tyler Reddick (on the team radio after nearly wrecking at the end of stage one)

“For future reference, that would be one of those times” – Randall Burnett (Reddick’s crew chief, in response)

“My spotter was yelling to go low, and I just couldn’t get down there in time. … I would’ve liked to see where we were going to be, but instead, I’ll be watching on NBC the rest of the race.” – Joey Logano

“Man, these guys have had a bad month, and I was hoping to get them a win to get them back in the owners deal, but it just wasn’t meant to be.” – Kyle Busch

Russell Crowe, if you would, sir:

The Truck Series race on Friday night seemed like it would be hard to beat, but the Food City 300 managed to one-up it anyway with a constant feeling that almost anything could happen. In fact, some of the Frontstretch crew was hitting Slack to predict that drivers like Clements or Gaulding would end up the eventual winner.

Reddick claiming the victory didn’t feel any less surreal given what he had to go through to get there. Five stars for entertainment value, for sure.

Everyone catches their breath. After that, it’s off to Road America to complete the Xfinity Series’ August road course slate. It could be a chance for Allgaier to quickly bounce back from dejection since he’s the defending winner, but as noted, Clements managed his lone career win in the same race the previous year, so there’s a chance for a surprise victor as well.