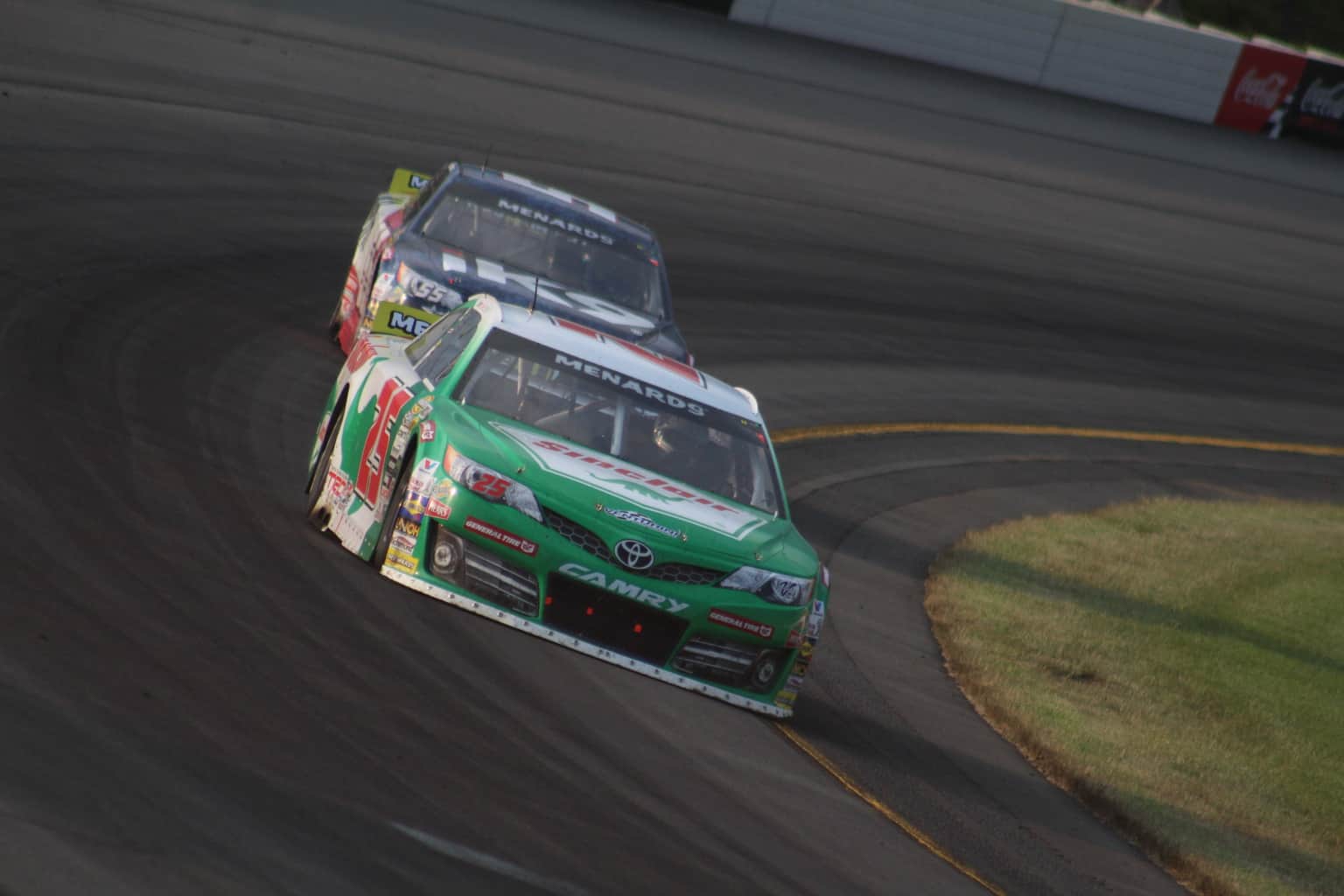 In a Nutshell: No dirt experience? No problem. Michael Self took the lead from teammate and dirt specialist Logan Seavey on lap 55 and never looked back, holding off defending Springfield race winner and title competitor Christian Eckes through a green-white-checkered finish to score his fourth win of 2019 and the seventh of his career:

Self claims his fourth ARCA victory of the season and extends his series points lead. #FlyTheV pic.twitter.com/Ym4jWU39zK

Seavey won his first career pole earlier on Sunday, but quickly lost the lead to a hard-charging Ty Gibbs, who held the lead on lap 12 when the race was red flagged early for a rain shower. After a short delay, Corey Heim bested Gibbs on the ensuing restart to take the lead on lap 17, staying out front until the yellow flew on lap 27, when Tim Richmond, driving for Wayne Peterson, spun exiting turn 2. Seavey opted to stay out on old tires while Heim, Gibbs and the rest of the leaders pitted for tires under the caution.

That proved to be a fateful decision. On the oldest tires of anyone in the field, Seavey faded during a 60 lap green flag run that saw both Self and Heim pass the polesitter. When the final yellow of the race flew on lap 94 for a Joe Graf, Jr. spin, Seavey restarted the GWC on the same old rubber, unable to mount any sort of challenge for the win. Self’s teammate Eckes, who was the first of the leaders to pit for fresh tires under the lap 94 yellow, managed to get up to second and finished the race a few car lengths behind Self.

Self’s victory allowed him to extend his points lead to 105 over Eckes as the ARCA Menards Series heads next to its second dirt race at the DuQuoin fairgrounds. Former dirt late model racer Bret Holmes finished third to minimize the damage and remain third in points, 130 markers out of the lead. Travis Braden was forced to pit under green on lap 64 with an overheating issue and finished outside the top 10, dropping to over 200 points out of the title lead.

Self has continued to defy expectations in 2019, his own at least. Self opened the season adamantly downplaying his short track skills, only to score wins at Five Flags Speedway and Salem Speedway in the first three events of the season. Now, in his first career dirt start in an ARCA car, Self bested a dirt ace in Seavey with a precision pass in turn 1 on lap 55 and proceeded to drive away from the field, managing tires over a 60-lap green flag run. And while Self was classy in expressing his thanks in victory lane, when one considers that he spent the week learning from defending Springfield winner Eckes, defending DuQuoin winner Seavey, and 10-time ARCA champion Frank Kimmel in the Venturini camp, was this really a surprise?

Speaking of Eckes, the late-race decision to pit for four tires resulted in a second place finish that minimized the points damage as much as possible.

Another impressive dirt debutant was Heim, who took the lead from Gibbs under green on lap 17, and also proved able to run down Seavey on the long green flag run in the second half of the race. Heim actually got side-by-side with Self during the GWC finish before getting out of the groove on turn 2 exit, fading to seventh in the final running order. That was not representative of how well the No. 22 ran.

Holmes’ third-place finish was the 12th consecutive top-10 finish for the No. 23 team.

Lastly, a big shout-out to Will Kimmel for posting a fifth-place finish in his first ARCA start of the 2019 season. That it happened despite Kimmel being forced to serve a penalty for a lane shift on the race’s initial start made it all the more impressive. The top five was by far the best showing for the No. 69 team this year, and marked Kimmel’s best Springfield result since 2014.

For the third consecutive race, a Wayne Peterson Racing entry found trouble on track and damage as a result. For the second time, it involved Richmond, who spun exiting turn 2 and clipped the right rear corner of the No. 06 against the wall. The damage was the most minimal of the incidents that have plagued WPR’s summer, but the team’s got to be tired of finding itself involved in incidents on track.

The only “wreck” of Sunday’s race came on the first lap, when Eric Caudell spun in turn 3 and ended up in the outside wall. Caudell has failed to finish in four of his eight starts in 2019.

Finishing eighth isn’t bad, but to see a dirt ace such as Ryan Unzicker finish off the lead lap and a complete non-factor in an ARCA dirt race was at best a disappointing performance.

Graf cost himself several spots in the finishing order by spinning out on lap 94.

Lastly, Gibbs saw a promising dirt debut for himself go down the drain around lap 70, when Gibbs was forced down pit road for what MAVTV reported was a “fuel injection issue.” Whatever the cause, the engine trouble dropped Gibbs to 15th in the final running order, his worst career finish in ARCA competition and the worst result for the No. 18 team since Riley Herbst’s wreck at Charlotte in May.

Also, while it’s understandable that Gibbs was frustrated with the engine trouble, it’s probably not the best image for a well-funded Joe Gibbs Racing driver to be throwing shade on ARCA’s cost-saving engine program:

Especially 24 hours after Denny Hamlin derailed the Cinderella story of 2019.

While Gibbs suffered with an engine issue, trouble under the hood was prevalent throughout the ARCA field courtesy of muddy conditions that proved hazardous to car grills. As previously mentioned, Braden saw his shot at a decent finish disappear on lap 64 when forced to pi road. ARCA veteran Bobby Gerhart saw his first start at Springfield since 2013 end right after the red flag was lifted, with his car severely overheating even after getting a grill cleaning. And as for Carson Hocevar, who had similar challenges, a picture’s worth a thousand words:

The races at Springfield and DuQuoin must return next season! Must!!!

To many special rules for this race.

Also, two men in the booth work perfect. NBC, save some money and get rid of half of the talking heads.