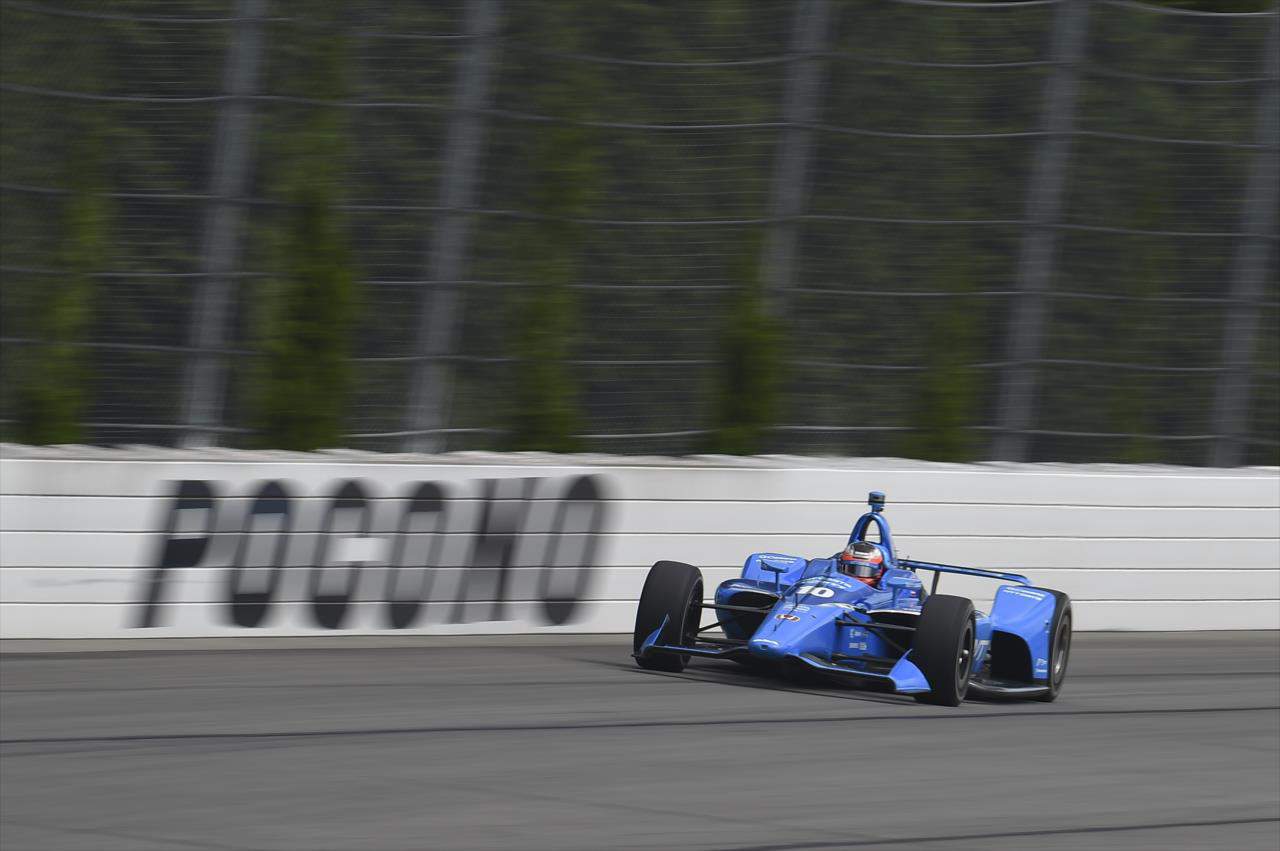 There was much anticipation heading into Sunday’s (Aug. 18) NTT IndyCar Series race at Pocono Raceway, following a near death-defying crash last season. But the field didn’t even make it to turn 2 on the opening lap before there was a multi-car pileup, seeing Felix Rosenqvist and Takuma Sato go airborne.

The crash was triggered when Sato, who began the race from seventh position, tried to go from top to bottom on the Long Pond Straightaway coming across the nose of both Alexander Rossi and Ryan Hunter-Reay. The end result was Sato and Hunter-Reay nosing into the inside wall, coming back onto the racetrack collecting Rosenqvist and James Hinchcliffe.

In the end, Sato thought he was clear when he was all but clear.

“Ryan and I were obviously racing exiting turn 1, and it looks like Alexander — we were both going right and left,” Sato said. “I thought I was all clear.”

Meanwhile, Sato’s aggressive driving upset many of the other drivers in the incident.

“I can’t even begin to understand how after last year Takuma thinks that’s acceptable,” Rossi said of the incident. “It’s disgraceful.”

Hunter-Reay, who was also right in the middle of the incident, understood why there was aggressive driving, noting Pocono isn’t the track it used to be.

“This is so unfortunate for the beginning of a 500-mile race,” Hunter-Reay said. “Our car was so good yesterday and we needed to put together 500 miles. I need to look at the whole replay before I comment, but all I know is I was minding my own business and now I’m talking to you outside the medical center.

“You’d think so after all the lessons we’ve learned here. The fact is that it is so important to gain positions at the start because it is a track position race. It’s not like it used to be. If you have a good car, you can knife through it. … I think a lot of guys felt the pressure to gain some spots at the beginning.”

Hinchcliffe, who was an innocent bystander of the wreck — checking up trying to avoid it — was pretty outspoken, specifically given the incident that took Justin Wilson’s life in 2015, and more recently the wreck in the same tunnel turn that paralyzed his Arrow Schmidt Peterson Motorsports teammate Robert Wickens last year.

“I don’t know how many times we have to do this before people figure out that you can attack all you want,” Hinchcliffe said. “It doesn’t give you a chance to win in the pits. … Let’s call a spade a spade. After last year, I don’t think anybody had to say anything. It’s just crazy. It’s such a waste of time and money and energy to come up here for a 500-mile race and have the top 10 in the fence on turn 2.”

Rosenqvist was taken to a local hospital by ground for further evaluation of non line threatening injures, while the other four drivers were released from the infield care center.

Because Rosenqvist’s front end clipped the fence, IndyCar officials had to repair the missing links. There was a 45-minute red flag period.

Once the race resumed, Rossi, Hinchcliffe and Hunter-Reay were penalized 10 laps upon their return to the event for working on their cars during the red flag.

Perhaps Honda can use Sato to showcase their driver assist technology? Their “Lane Watch” and “Blind Spot Information System” surely would have alerted Sato that Rossi was RIGHT BESIDE him.

I don’t know how in any reality Sato thought he was clear. Clipping the front wing I would buy that argument… but running into the RF tire with your LR tire? No way, not at this level.