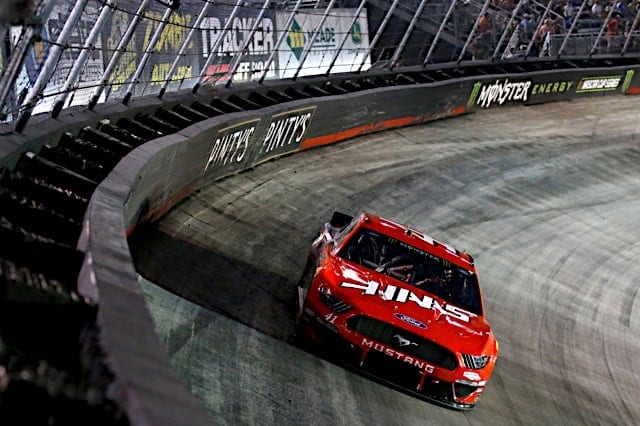 Daniel Suarez didn’t set the world on fire in the Bass Pro Shops/NRA Night Race at Bristol Motor Speedway, but he quietly finished eighth on Saturday night (Aug. 18) — moving himself above the playoff cutline.

“A very solid day for the No. 41,” Suarez said. “I feel like we had a top-10 car the entire weekend, and that’s pretty much where we ran. We had lots of ups and downs on pit road, some mistakes there as well as some mechanical issues. I feel like we’re lucky we were able to continue, to finish the race with battery [issues].”

Suarez entered the night six points behind Clint Bowyer and finished one spot behind him. But due to a third-place finish in stage one, Suarez is now two points ahead of Bowyer for the final playoff spot with two regular season races left.

He got the stage result by staying out when most of the field pitted in a caution with six laps left in the first stage.

“I think [third in stage 1] was probably the biggest thing of the day,” Suarez said. “I feel like that was an amazing call from my crew chief Billy Scott.

“Overall, I’m proud of my team. I hope we keep the momentum going in the next few weeks.”

Suarez avoided one situation that could have been disastrous to his and Bowyer’s season. Bowyer spun right in front of him, and Suarez squeezed through just inches away from Bowyer on the left and inches from the outside wall on the right.

“I’m a little lucky and I’m a little good,” Suarez said. “It was pretty tight. I was very, very tight. I was really lucky, I thought from Clint’s experience that he was gonna keep his car out of the wall, and it was just enough room for me to fit in there.”

Something else that could have kept Suarez from making the playoffs for the first time in his career was Matt DiBenedetto almost won the race. He was passed late by Denny Hamlin, who went on to win, but had DiBenedetto won, then there would be one less driver getting in the playoffs on points. Suarez had mixed feelings about the result.

“[DiBenedetto] did an amazing job,” Suarez said. “I feel like he deserved the win, but you never know how things are going to work out. I feel like I have to do my race and let everything else play out by itself. I can’t control that. … I’m kind of lucky that he didn’t win, but I wish he would have won because he’s an amazing driver. He deserves that ride, and I think he’s done a very good job this year.”

The top 10 was the second in a row for Suarez and his ninth of the season. He had nine top 10s total in 2018, so Suarez has 12 chances to eclipse that number.

“I think it was a positive weekend,” Suarez said. “I wish we could have finished a little better, probably in the top five or so. But for whatever reason, we were strong, but we weren’t super strong.”

Daniel and Matt finishing in the Top Ten, OUTSTANDING Daniel is such a Wonderful Ambassador for NASCAR and Matt deserves everything he gets . They Both have Struggled long and Hard especially Daniel. Absolutely Amazing he arrived IN The USA with Very little Cash. with a Dream, NOT SPEAKING ENGLISH. and To earn through hard work and Perseverance, Win The Xfinity Championship and Move to Monster Cup.These are PHENOMENAL accomplishments.

I remember my first top 10 in my short time in NASCAR . For me it was very easy, just had to drive to Georgia and
Put on my Helmet so he won my and millions of others Respect.

It’s Fascinates me now that he drives for Tony Stewart who like myself is from , Rushville, Indiana

While I’m writing this it would be interesting to find out , how many People buy Fords and Racetrack seats are filled
Due to Daniel. I’ve been to “Monterey” many times and know well how Wonderful the Real Mexican Citizens Are
And how they Support Successful Fellow Citizens who are Over achievers and bring Honor to Mexico.

The Ride Buying , Ridiculous Inspection process and Allowing their drivers to look like homeless people is not helping
Increase attendance. It would be helpful if NASCAR the could bring back Norris Friel and the Gazaway BrotherS AND
OBTAIN A Razor Blade Sponsor