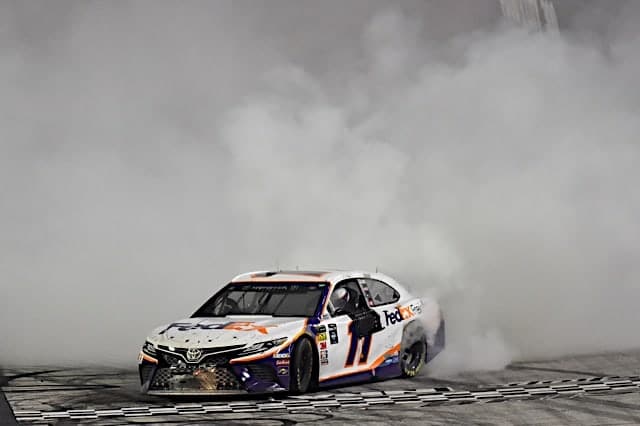 Denny Hamlin went door-to-door with Matt DiBenedetto and edged out a victory in the 2019 Bass Pro Shops NRA Night Race at Bristol.

Hamlin survived two loose wheel scares to track down his Toyota ally and earn the win, his fourth of the season.

But the biggest story of the night was DiBenedetto, the journeyman driver who Leavine Family Racing announced this week would not be returning to the No. 95 in 2020.

Hamlin passed DiBenedetto with 12 laps to go after stalking him for more than 50 circuits, with both drivers using lapped traffic to their advantage while battling.

Brad Keselowski, Kyle Busch and Chase Elliott rounded out the top five, with Daniel Suarez and Ryan Blaney scoring top-10s behind them.

Hamlin fought with Kyle Larson, who finished sixth, for the lead in an incredible battle early on. Hamlin secured the lead after the drop of the green flag, but Larson closed in and the two drivers swapped the lead back and forth. Hamlin eventually gained the upper hand, but an incident in front of him between Jimmie Johnson and Austin Dillon sent the field to pit road under caution.

Hamlin endured a slight amount of damage repaired during his stop, lost the lead but got his car back into shape. DiBenedetto remained in the top five throughout the entire opening green-flag run.

Larson held the lead on the restart until the final laps, when the lapped car of Daniel Hemric held up the No. 42 and allowed Chase Elliott to draw up alongside the Chip Ganassi Racing driver, but Larson held off Elliott for the stage win.

Elliott got the better of Larson on pit stops, taking the lead on the restart and fending off Kevin Harvick for a few laps. Harvick then led for 28 circuits, as Hamlin had to pit with a possible loose wheel and a caution came out for an Aric Almirola spin. Almirola spun again after the restart, and his Stewart-Haas Racing teammate Harvick was forced behind the wall with transmission issues.

Kyle Busch, on much older tires, benefited from a caution that ensued from Alex Bowman blowing a tire and Joey Logano and William Byron piling into the No. 88.

Another significant yellow flag came shortly after the restart when Ryan Blaney crashed into Ricky Stenhouse Jr. David Ragan and Michael McDowell were involved as well, with Ragan spinning down and damaging Jimmie Johnson’s ride.

On the restart, DiBenedetto took advantage of a shuffle near the front to shoot to second place as Jones led, hunting him down after a wild restart and eventually getting by the No. 20, taking the lead and not relinquishing it for 93 laps. Jones made contact with the wall that sent him to pit road, ending his chances.

Hamlin then moved into second a number of laps later and began closing in on DiBenedetto, and was aided by the lapped car of Ryan Newman, who threw a huge block on DiBenedetto and slightly damaged the No. 95’s left front.

Hamlin’s No. 11 closed in and battled with DiBenedetto, eventually using the bottom groove to get by the No. 95. Hamlin set sail from there, opening up a gap that closed somewhat on the final lap as he encountered more traffic, but crossed the line about a half a second in front of DiBenedetto’s Toyota.

The post-race interviews were some of the most candid of the year, with Hamlin apologizing to DiBenedetto and mentioning his history with the driver of the No. 95, and DiBenedetto showing every emotion possible during his and eliciting cheers from the crowd.

The NASCAR Monster Energy Cup Series takes a break this week, returning to action on September 1 with a 6 p.m. start time for the Bojangles’ Southern 500 at Darlington Raceway.

Newman helped himself big time by sliding into Matt. If Matt had won the race then Newman probably missed the chase. I bet ol sneaky Newman’s contract pays him a bonus for making the playoffs. That’s the real story you missed completely in your article.Newman couldn’t afford to have Matt win. Denny thanked Newman big time.

Makes sense to me. But can you really think of stuff like that when you are racing at Bristol?

Makes sense to me. But can you really think of stuff like that when you are racing at Bristol?