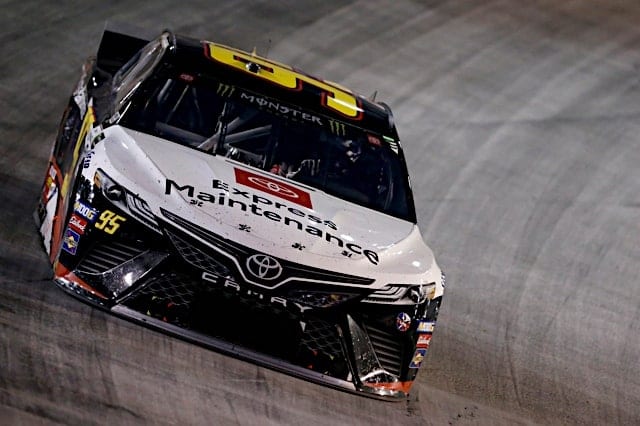 And boy, is that fitting for the California native’s week and race at the Last Great Colosseum.

DiBenedetto began the race in the seventh position, though almost immediately jumped into the top five where he would remain for the stage. In the second stage, the No. 95 car may have dropped to 12th, but the final stage is where DiBenedetto put his short track skills to work.

On a restart with 112 laps to go, DiBenedetto restarted fourth, second on the outside line behind race leader Erik Jones. The No. 95 drove to second quickly, and then battled the No. 20 Toyota for the lead. After a few laps of pressuring, Jones hit the wall, allowing DiBenedetto to get by for the lead.

DiBenedetto led the next 93 laps, looking like he might cruise to his first NASCAR victory. But while battling to put Ryan Newman a lap down, his left front got caved in as the No. 6 Ford moved up the track which ultimately tightened the No. 95 up, allowing Denny Hamlin to close in.

With less than 10 laps remaining in the race, Hamlin got by DiBenedetto for the lead, which led to a runner-up finish for the No. 95 team — a career-best for both DiBenedetto and Leavine Family Racing.

“Denny was strong. I thought before that I could hold him off, but after that, I got tight. I’m thankful for this team, I want everybody to be thankful for this team and all my sponsors. Without them, I wouldn’t have been able to have this performance. I wanted to win. It’s coming. I think we’re just getting started.”

For DiBenedetto, he’d never been in a position in his career to win a race. He believes the damage he received from Newman costed the No. 95 a “couple of tenths,” though admitting he doesn’t want to blame the loss on the No. 6 car.

“Newman races hard so I’m not mad at him,” DiBenedetto added. “It costed us the chance of trying to hold off Denny. Denny was fast, he was doing great, his car was good. I thought before that, not that I wasn’t worried, but I thought that if he got to my inside I could hold him tight, I can do whatever I have to do to keep him behind me, at least race door to door.”

Admittedly so, DiBenedetto said battling door-to-door with Hamlin for a victory is something he could have only dreamed of prior to tonight.

“That’s a guy that 1) I’ve asked advice from and 2) I’ve been a fan of since I was a kid and 3) to be racing door-to-door for the win with a few laps to go, crazy. I’m sad I didn’t win, but it’s still something I’ll remember and build on.”

When Hamlin passed DiBenedetto with under 10 laps to go, DiBenedetto admitted it was hard to keep his composure, despite always being “mentally strong.”

“I was screaming in the car,” he stated. “Screaming because the damage got us tight. Everybody is trying to fight, whether it’s to stay on the lead lap or to win. To see it slip away, oh my gosh the pain was like being stabbed one hundred times in the chest. It was killing me. It’s a sign of things to come. I’m not done yet. I feel like a team will hopefully grab me and they’ll be glad they did because I’ll do nothing but win and give them my all.”

Earlier this week, DiBenedetto announced on Twitter he won’t be returning to Leavine Family Racing in 2020, despite giving the No. 95 its best season to date with three top-five finishes and five top 10s, all coming in the past nine races.

Reports have Christopher Bell going to the No. 95 car next season, but DiBenedetto hopes this race proved he deserves a good ride, noting he didn’t drive differently this week despite the devastating news.

“I don’t want people to think I raced different because of the week I had,” he said. “I give 110 percent no matter what I’m doing. This is what I live for. Live, eat, sleep and breathe every day of my life. I’m dedicated every second of my life to this. I hope whatever team can scoop me up next year, I hope it’s a team I can win in the Cup Series and I’ll drive my heart out.

“I’ve had to be strong for me and my wife, especially this week. It’s been really hard on both of us, really hard on her. That’s the hardest part of all of this, I love my wife more than anything and to go home and see her bawling her eyes out, it’s hard to see your wife have to go through this roller coaster of emotion with you. It’s really hard. I just want everything to work out.

“This journey has made me so much stronger. It’s hard, it’s been really hard. But I’m glad it’s been hard, I don’t want anything easy and I want to appreciate it the most I possibly can. I want it to make me fight, claw and dig as hard as I possibly can.”

In the end, that might be the most satisfying part of the race, because he knows earning their respect could go a long way in landing a ride for 2020.

DiBenedetto said: “That’s huge. We’ve got to race against these drivers every week, and you can’t go out here and just be bulldozing through the field and racing not smart. You have to earn the respect of these guys. Denny Hamlin, I’ve looked up to since I was a kid and Kyle Busch, Kyle Larson, Suarez, all these guys that came up to me after the race. I could go on and on.

“It was hard to hold it together when all of these drivers are coming up to you. It’s amazing to have earned that respect from them because that’s big. They can be your biggest advocate, too, in the situation that. I’m in. I have the respect of those guys so I’m lucky to have been able to race smart around those guys and earn their respect.”

Despite coming up just short of his first victory, DiBenedetto believes a win is around the corner.

Sol Shine
Reply to  Bill B

Or if nutbar Newman would have used his head for a change and gave up a meaningless pass. That guy is some special kind of ignorant.

Yeah, Newman definitely didn’t want DiBenedetto to win. That would’ve taken another playoff spot away. So, he tries to run him up into the wall, bashing his left front in, and then lets Hamlin slide by with ease. Hopefully karma bites Newman in the ass and he finishes in last place at Darlington and Indy.

Bill B
Reply to  JDinNC

You know, I did not even make that connection. I just thought Newman was being Newman making it as hard to pass as possible and trying to stay on the lead lap to boot. I never thought about him making sure someone lower than 16th didn’t sneak in a win. Not quite as dicky as Harvick wrecking half the field at Talladega, but definitely in the same ballpark. Thanks for pointing that out. We’ll see how many other writers make that connection when most of the post race articles come out this week.

Newman has always been sneaky. Sure he’s tough to pass, always has been. But I’d bet that Newman slide was definitely on purpose. Worked perfect for ol sneaky didnt it. I also bet his contract pays him more if he makes the playoffs.

Wonder if grandpa will bring Tyler Reddick up and grandson goes back to xfinity. Nah, grandma and mommy won’t allow it.