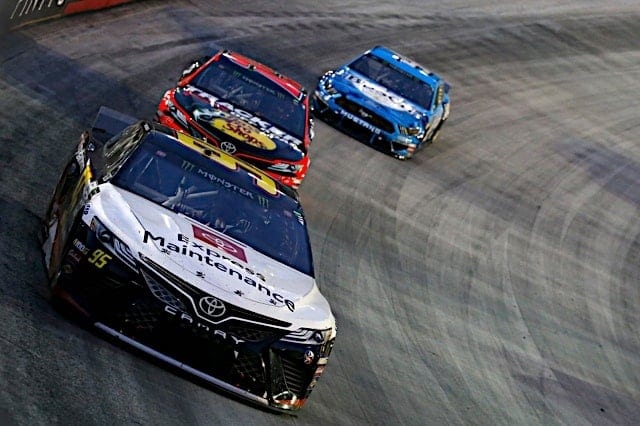 Monster Energy NASCAR Cup Series: Oh, What Might Have Been

One slip-up. One simple mistake. When you’re racing with the big boys in NASCAR’s top division, that’s all it takes for a Cinderella slipper to smash into tiny little pieces.

Matt DiBenedetto was on the verge of one of the sport’s great upset stories Saturday (Aug. 17) at Bristol Motor Speedway. Just days after being told he’d lost his ride at Leavine Family Racing for 2020 he was in position to win the first Monster Energy NASCAR Cup Series race of his career. Bristol had always been DiBenedetto’s best track. He once finished sixth with a program so underfunded that it went bankrupt. Muscling into the lead on lap 396, the 28-year-old pulled away and left the great racing colosseum in an uproar of anticipation down in Thunder Valley.

There he was, leading comfortably with time running out when Ryan Newman popped up in front of him. Newman is known for being impossible to pass; as a driver on the postseason bubble, he shouldn’t lie down and move over. But the resulting battle over Newman’s push to stay on the lead lap led to contact that irreparably damaged the handling of DiBenedetto just enough to lose his advantage.

In mere moments, Denny Hamlin had run down DiBenedetto and earned his fourth Cup victory of 2019. Suddenly, second place was the first loser and a number of playoff trajectories had changed.

For his part, DiBenedetto and crew chief Mike Wheeler (formerly partnered with Hamlin) took defeat in stride. But at times, emotions got the better of him, the driver breaking down twice after exiting the car. The reality of the situation hit; there’s a cruelty to running second when you know your time in first-rate equipment could be running short.

“All I want to do is win in the Cup Series and we were close,” DiBenedetto said. “It’s so hard to be that close.”

Will he ever be that close again? Can someone step up and give him an opportunity? That next ride is never guaranteed, especially when a month from now the win column says zero instead of one.

What a valiant drive by Matt DiBenedetto. But oh, what might have been.  –Tom Bowles

No one wanted to win Friday’s (Aug. 16) race at Bristol Motor Speedway… or so it seemed.

Kyle Busch was the dominant car early, especially after a lap 38 crash took out a quarter of the big-name drivers: Christopher Bell, Cole Custer, Erik Jones and Joey Logano. The No. 18 car remained in the lead until a late caution, when there was a split strategy. Brandon Jones won the stage via an incident between Justin Allgaier and Tyler Reddick battling for the lead.

When stage two began, Busch was dominant. But with five laps to go in the stage the No. 18 began to smoke. Despite winning the stage, he radioed to his team, “I’ll meet you at the truck,” as his engine expired.

The race was wide open from there on out, but Allgaier inserted himself as the front runner. After leading 131 circuits, the No. 7 Chevrolet blew a right-front tire going into turn 1 with less than 10 laps remaining, ultimately resulting in an eighth-place finish.

Reddick took over the lead and would win the race, that coming after basically starting the event one lap down because the No. 2 car failed inspection four times, meaning he would have to start at the rear and serve a pass-through penalty once the race started. That didn’t slow the Californian from capturing his fourth checkered flag of the season.

Jeremy Clements had a strong run, recording a career-best fourth-place finish on a short track. Gray Gaulding had a sixth-place effort, with Timmy Hill, who was running a Hattori Racing Enterprises and MBM Motorsports joint effort, equaled his best career finish of seventh. – Dustin Albino

The Truck Series kicked off its playoffs Thursday night (Aug. 15) at Bristol Motor Speedway with a bang. In a race slowed by 12 cautions, including the stage breaks, it was Brett Moffitt who emerged from the carnage victorious and notched his spot in the Round of 6.

Chandler Smith, in this third career start, scored a career-best runner-up finish ahead of Ross Chastain, who led a race-high 78 laps but was forced to run from the back following a pit road penalty at the end of stage two. Stewart Friesen and Grant Enfinger rounded out the top five.

Seven of the eight playoff drivers finished in the top 11, with the lone exception of Tyler Ankrum who struggled with power to his truck and even suffered a stall that saw him needing a push off of the track. Though he was still running when the checkered flag flew, he ended up 20th, six laps down.

As it stands, Moffitt will move on Canadian Tire Motorsports Park, the series’ lone road course race, with his spot in the Round of 6 already secured. Chastain sits second in the standings with a 25-point advantage over seventh. Friesen is second, eight markers behind Chastain. Meanwhile, ThorSport Racing teammates Matt Crafton and Enfinger are tied to round out the top five. Johnny Sauter sits precariously, just three markers ahead of Austin Hill, who’s currently the first driver on the outside looking in. Ankrum, who’s 51 points behind leader Moffitt, faces a deficit of 13 markers to Sauter.

None of the championship eligible drivers have won at the Canadian road course, though Crafton and Sauter, who have six starts apiece, have five top 10s to their credit. Moffitt, Friesen, Chastain and Hill each boast a single top-10 result, while Ankrum will make his first start at the track. – Beth Lunkenheimer

Will Power finally broke through this weekend at Pocono Raceway, securing his first victory of what has been a troubled year in a rain-shortened ABC Supply 500.

But he’s not the only Team Penske driver breathing a sigh of relief as the NTT IndyCar Series nears the end of its 2019 season.

Josef Newgarden, who saw his points lead shrink to just 16 points after throwing away a fourth-place finish at Mid-Ohio in July, now has a comfy 35-point advantage over nearest rival Alexander Rossi thanks to a lap one wreck that took out the Andretti Autosport driver and four other competitors.

Though his crew got the car back in running order and sent him back on track for a few extra laps, Rossi ended the day back in 18th place, while Newgarden cruised home to a quiet fifth, his 11th top five of the year.

With just three rounds left on the calendar and Newgarden running as consistently as ever, Rossi, along with Scott Dixon and Simon Pagenaud, now find themselves in what essentially amounts to must-win scenarios. Heading to a track where Newgarden has won before–a fact the Frenchman knows all too well–a win next weekend might be their only hopes of keeping things close when the series arrives at WeatherTech Raceway Laguna Seca in September. – A.J. Hecht

Heinricher Racing (via Meyer Shank Racing with Curb-Agajanian) announced Tuesday that Katherine Legge will be joined by fellow British racer Alice Powell in the Caterpillar Acura NSX GT3 in this weekend’s Michelin GT Challenge at VIR.  It will be Powell’s first-ever IMSA start.

Powell comes to the IMSA WeatherTech SportsCar Championship after competing in the first-ever W Series.  In seven races (six point races, plus a non-points race at TT Circuit Assen in The Netherlands), Powell won the season finale at Brands Hatch and earned five podium finishes.  She was consistently one of the best drivers in the series, but DNFs at Misano and the Norisring dropped her to a third-place finish in points.  Powell also competed as a guest driver in the first-ever Jaguar I-Pace eTrophy race in Ad Diriyah, Saudi Arabia last year.  She finished fifth in a race run in damp conditions.

Powell’s background is primarily in open-wheel racing, somewhat typical of professional racers who end up racing sports cars.  She has won championships in Formula Renault competition in England and Asia and was the first woman to score points in the former GP3 Series.

For Legge, Powell will be her third sprint race teammate of the season, joining Christina Nielsen and Ana Beatriz.  Legge is currently ninth in points with a best finish of fourth at Watkins Glen. – Phil Allaway

A Superspeedway victory at Daytona, three wins on mile-and-a-half tracks, two wins on short tracks, and now add a victory on a dirt track. Michael Self rocketed away from Corey Heim on a late restart to earn his seventh career victory and fourth victory of the season. Despite rocketing away from Heim on a late restart, he’d finish the race in seventh. It looked like the points leader would add cushion to his points lead but with Christian Eckes, moving away isn’t going to be easy.

Eckes brought the No. 15 home in second to add some momentum ahead of a weekend off before the DuQuoin Labor Day Classic. Bret Holmes finished third, Logan Seavey finished fourth, and Will Kimmel, in his return to ARCA, brought home his 17th career top-five finish.

Following the off-week, ARCA returns to the track at DuQuoin State Fairgrounds for the Southern Illinois 100 on Aug. 31 and will be shown live on MavTV 9 p.m. ET. With four races remaining, the battle between Eckes and Self will continue to brew. Who will earn their first career championship? Can someone from the outside spoil the party? – Christian Koelle