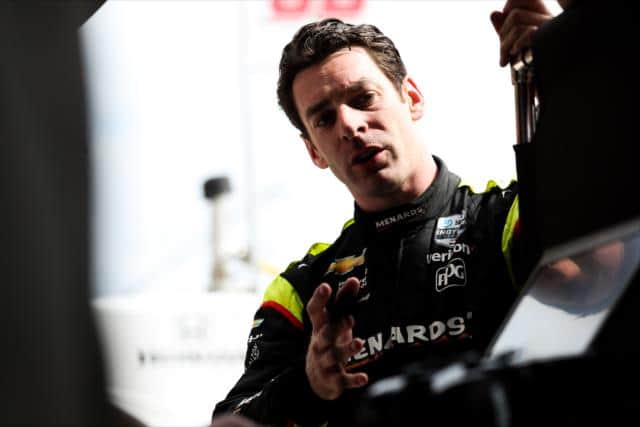 Based off his dominating performance at the Indianapolis 500 in May, Simon Pagenaud was one of the pre-race favorites for Sunday’s (Aug. 18) ABC Supply Co. Inc. 500 at Pocono Raceway. It turns out, he leaves with “unfinished business.”

Due to qualifying getting rained out because of weather, Pagenaud began the race at Pocono Raceway from third position. But by the end of the opening lap, the No. 22 car in front of the field, even with a first lap crash.

When the race resumed, Pagenaud held off his closest competition, including Scott Dixon, Will Power and Santino Ferrucci until green flag pit stops began on lap 38. After the stops cycled through, Pagenaud was out front, leading a race-high 64 laps, earning him an additional three points toward the championship battle.

It was during a later pit stop that Pagenaud and Marco Andretti pitted together, with Andretti on the outside. Because the No. 98 needed to make an evasive move to the left in order to get into his pit stall, Pagenaud lost valuable time and ultimately the lead.

Pagenaud believes that mishap could have costed him a shot at the victory, solely because of how much track position means at Pocono.

“It matters a lot,” Pagenaud said of track position. “Once we were third it was really difficult to come back. The track also changed. We needed to make adjustments and we didn’t get to it due to the weather. A bit of unfinished business, I feel like. I feel like we had the strongest car, we just couldn’t finish the deal. It’s part of racing. After you win Indy, you can’t be too disappointed with your luck. I don’t want to say I had bad luck today, it was just bad position and bad timing.

“In this situation, it is harder [to pass] than Indy, but similar to Indy. I thought the package IndyCar brought was really good. At the end of the day the fastest car won, so you just have t keep making adjustments on it and keep up with the track. I don’t think we were able to do that at the right time today.”

After battling weather for much of the afternoon, lightning struck within eight miles of the track meaning there was a 30-minute hold. During that hold a heavy downpour entered the Pocono Mountains, where IndyCar officials called the race on lap 128.

Pagenaud gets credited for third, behind Dixon and race winner Power.

“It’s a great day,” he added. “We showed that our cars were the strongest today, and overall it’s a pretty good points day for us overall on the [No.] 22 car. Obviously, yes, did I think we could have done a little bit better, at least we would have tried. I think we had the car to do so, but Will found a way to the front as he always does here and he was the class of the field at the end. Who knows what would have happened, but I do think we would have challenged.

With three races to go in the 2019 season, Pagenaud sits third in the championship standings with three victories (Indy 500, Indianapolis G.P. and Toronto). Pocono is the first time this season the No. 22 team finished on the podium without winning the race.

Currently, Pagenaud is 40 points behind Team Penske teammate Josef Newgarded for the championship lead. Alexander Rossi is slotted in between the teammates, only five markers ahead of the No. 22 crew.

“We gained points on Josef for a few races now,” Pagenaud mentioned. “It’s a championship that let’s the best man win over the year. Obviously he’s my teammate and I can only think of good things for him, but I also want to win, and so does Scott and so does Rossi.

“There’s three races to go and I want all of the chances in the world for our team. We’re going to keep pushing and doing what we’ve been doing. We’ve got to be flawless, keep pushing, do what we do and try to win races. That’s going to be the name of the game until the end.”

IndyCar heads to Gateway next week where Pagenaud has finishes of third and fourth in two starts.

Simon is the classiest guy on the INDY CAR circuit.