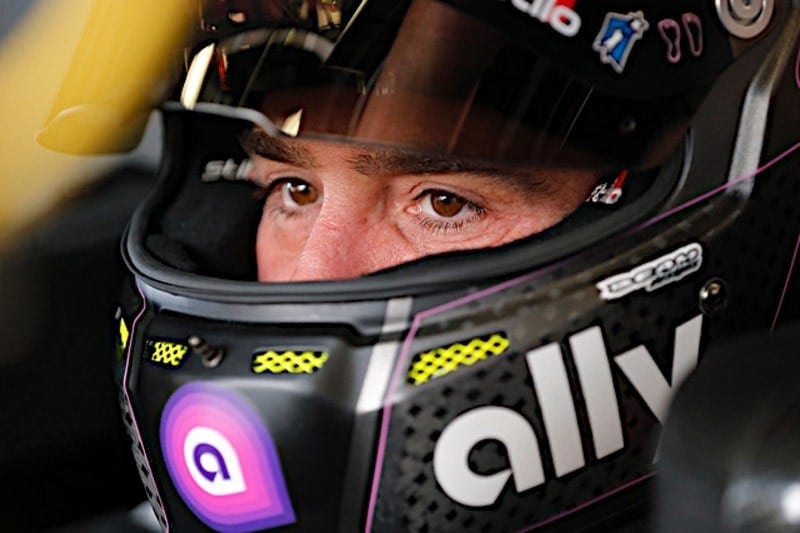 Denny Hamlin won the race the right way by tracking down the leader with fewer than 15 laps to go and passing him cleanly to take the lead and eventually the win. After starting the weekend at Bristol Motor Speedway by winning the pole, Hamlin was in the mix but not really the conversation, until the final run of the night, when he and his team hit on the right adjustments at the right time. It gave Hamlin the fastest car when he needed it most, even if his win was so unpopular he apologized for it.

Hamlin is looking at perhaps his best championship chance in years.  His four wins give him playoff points and he’s racing with confidence. He’s never been able to close the deal, even entering Homestead with the point lead once only to see the title slip away in the final race. He’s running out of chances to show he can finish what he starts.

The reason Hamlin’s win was less than popular was that he took it away from Matt DiBenedetto.  After announcing earlier in the week that he was losing his ride in the No. 95 after this season, DiBenedetto had a great Bristol weekend, sitting in the top 10 in practices and qualifying. He took the lead with just over 100 laps to go by powering past Erik Jones and pulling away, holding that lead for 93 laps, the most anyone led Saturday night. Winning despite being given his pink slip would have been the ultimate showing up and fans knew that and wanted the likable DiBenedetto to deliver it.

DiBenedetto has given Leavine Family Racing the best season its ever had in the Cup Series, and his being dropped in favor of Christopher Bell hasn’t gone over very well with fans. It’s the downside of team alliances for sure, and this isn’t the first time a bigger team has made a satellite drop a driver in favor of a prospect they didn’t want to make room for themselves, and it won’t be the last. But don’t expect these moves to be well received by fans anytime soon.

What… is the take away from this race?

DiBenedetto’s 2019 season with LFR has not only been his best in the Cup Series, but it’s been the team’s top one as well. And while it’s true that an alliance with Joe Gibbs Racing has elevated the organization’s equipment somewhat, it had a technical agreement with Richard Childress Racing and a Cup winner behind the wheel last year and didn’t perform this well.

And if you really look at the before and after, DiBenedetto has elevated every small team he’s raced for.

Fans commonly assume that if a driver is racing for a smaller organization that he’s not good enough to land a better ride. That might have been true in a different era, but in this day and age, sponsorship too often trumps talent when it comes to landing a choice ride in any of NASCAR’s national series. But make no mistake: lack of money does not equal lack of talent.

Repeat that a few times.

It isn’t as though DiBenedetto just learned how to drive this year, just like Kurt Busch or Clint Bower didn’t forget how to drive when they raced with smaller organizations.

It works both ways; money doesn’t equal talent, though it will buy a better ride. Just be careful not to mistake a good driver toiling in poor equipment because it’s better than staying home for him not being good enough for a better ride.  All too often, it seems as though drivers like DiBenedetto get labeled as damaged goods if they race for a smaller team and never get a chance in better equipment. Yet every week, they’re out there earning one.

Defending race winner Kurt Busch led a handful of laps mid-race and overall had a strong night, just not strong enough to ever really be in the conversation when it came to potential winners.  Busch finished a respectable ninth. He needs to find just a little something more to insert himself into title contention, but it’s not quite out of reach.

Eight-time Bristol winner Kyle Busch had an uncharacteristically lackluster performance at Bristol.  He qualified 31st and was caught a lap down early as a result. He eventually got the lap back and worked his way forward, leading a total of 30 laps and finishing fourth. But he never looked like a winner and was outshined by all his teammates over the course of the night.

Defending Cup champion Joey Logano also struggled Saturday night, losing a lap early, but it was a late-race incident when Logano, along with William Byron and Alex Bowman, saw any hopes at winning go up in smoke.  He finished three laps down in 17th.

The problem with struggling as a team isn’t always just about making the right calls to fix things.  Often, they find themselves in the middle of trouble because they haven’t raced away from it.  That’s what happened to Jimmie Johnson in Bristol.

Because his team didn’t practice in qualifying trim prior to time trials, Johnson started 30th, putting him in prime position to get caught up in other drivers’ issues. The first problem came when Austin Dillon cut a tire, with the result being Johnson suffering heavy damage in a chain reaction. He never really recovered from that, and a second incident late in the race didn’t help matters.  His rally to finish 19th was actually pretty impressive. It just wasn’t enough.

In reality, Johnson’s playoff hopes died in Thunder Valley. Unless he can pull off a win at Darlington or Indianapolis, he has little hope of making up 26 points. It will be the first time ever that Johnson misses the championship run.  He’s currently the only driver to appear in each one since the format began in 2004.

Whether you agree with the system or not, that’s impressive. Hall of Famers Jeff Gordon and Tony Stewart missed at some point. So did Kyle Busch and Kevin Harvick. It’s because Johnson was so consistently good for so long that it’s jarring to see him struggle now.

Silly season is underway. David Ragan announced his retirement this week, opening a seat at Front Row Motorsports. DiBenedetto is out of a ride, and Bell is expected to be in that ride next year.

Meanwhile, Erik Jones and Joe Gibbs Racing have reportedly agreed to an extension, but no announcement has been made. Kurt Busch may or may not return to the No. 1. He deserves an encore, but Chip Ganassi might have other plans, and those may or may not include Ross Chastain. Clint Bowyer’s status appears unresolved.

Richard Childress has expressed a desire to bring Tyler Reddick into the Cup fold. That could open a top Xfinity ride. If Bell moves up, his JGR NXS ride would be open as well. Those are quality rides that could be stepping stones for someone.

Where might DiBenedetto land in all of this? It’s been bandied around that he should be given the No. 20 Xfinity ride for his trouble, but should he really go with a team that’s burned him twice? He’s better off taking a top NXS ride if one is available than the Front Row seat, where he’ll again be labeled a backmarker despite the fault lying with the equipment.

In a perfect world, a great home for DiBenedetto would be at JR Motorsports in the Xfinity Series, putting him and Noah Gragson in contention for the No. 48 when Johnson retires.  That scenario could elevate both drivers, and even the one who didn’t end up in the car would have an excellent shot of landing somewhere quality. But the world is rarely perfect, so sit tight because Silly Season has started, and it’s only going to get more intense from here.

How… many playoff contenders are really title contenders?

NASCAR has expanded the number of playoff teams from 10 to 12 to 16 over the years, and while the win-to-advance and the single-race championship have opened the door for a few more surprises, it’s a bit misleading to call all 16 teams title contenders. The fight for the final spots on points is good fodder for talk and something for the TV cameras to focus on when the races get too predictable.

But have any of the drivers outside the top 10 shown anything to suggest they really deserve a championship? None of them have won. Only one has more than a handful of top fives.  Stage wins? Five between them, with four of those belonging to Kyle Larson.

In short, despite all the talk of making the playoffs, what have any of them really done to deserve a title?  Why do we need more than 10 contenders? Trucks have just eight and that seems like a more reasonable number in terms of really earning those spots. There could still be four rounds, just with fewer drivers eliminated each time. Would smaller cuts really make the races less compelling?

And while the format has opened the door for surprises, should it? Why should a driver who struggled to be 15th in points for most of the season win it all if he has a couple of well-timed good races? Why does he deserve to advance over the driver with the most wins over 26 races who had terrible luck not of his doing in the first round?

Simply making the playoffs is no indicator of success in them.  16 drivers will get in, but if half are truly championship-caliber in any given year, that’s a lot.  Maybe it’s time to back it down a bit and really make a postseason berth a big deal.

Could this be the year NASCAR finally gets what it wants, an all-Gibbs, all-Toyota final four? It will be Ky. Busch, Truex, and Hamlin for sure. My money is DiBenedetto beats out Jones for the fourth position at Phoenix. If Brian was still around, he’d be in heaven!

Amen on that last sentence. I just commented similarly in the “Thinking Out Loud” column.

Logano, Truex, both Busches, Hamlin and Harvick (I could go either way on Keselowski but he does have 3 wins so I’ll include him) are the only ones that have shown the consistency and speed most of the season to deserve a crack at the title. So that’s 7 of the 16 that will eventually be labeled “playoff contenders”. What a joke.

If they cut down the number of eligible “contenders” the network would have fewer drivers to ramble on about and more to ignore.