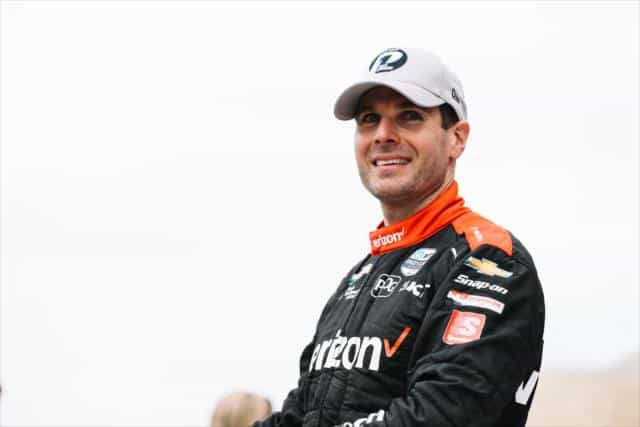 Will Power finally found victory lane in 2019 on Sunday, claiming his first win of the year in a rain-shortened ABC Supply 500 at Pocono Raceway, extending his streak to 13 straight NTT IndyCar Series seasons with a victory.

It was a much needed win for the 2018 Indianapolis 500 champion, who has struggled at points throughout the season and has missed out on victory several times despite having three NTT poles to his name.

But the real story was what was happening behind him, as Alexander Rossi suffered a devastating blow to his title chances and points leader Josef Newgarden gained some breathing room in his pursuit of his second IndyCar title.

Rossi’s disappointing day ended almost as soon as it began after getting caught in a lap one wreck that saw the Andretti Autosport driver end the day 18th in the running order.

Charging down to turn two, Sato cut across the nose of Rossi’s No. 27 Honda, collecting Ryan Hunter-Reay and sending the tangle of Dallaras into the inside retaining wall, then careening back across the track. Without anywhere to go, James Hinchcliffe slid into the outside wall, while Sato clipped the left rear corner of an evasive Felix Rosenqvist. The contact lifted the car off the ground, turning his Chip Ganassi Racing Honda on to its side and sending the nose of his car into the catchfence. Although he walked away from the incident, Rosenqvist was sent to a local hospital for further evaluation of non-life threatening injuries. The other four drivers were cleared at the infield medical center.

Felix Rosenqvist has been evaluated at local hospital and will be released shortly ?#ABCSupply500 // @FRosenqvist pic.twitter.com/osrUVCCAPh

The accident caused damage to both the SAFER Barrier and catchfence, leading to a lengthy red-flag period.

During the stoppage, Rossi’s Andretti Autosport crew immediately got back to work in hopes of getting the championship contender back onto track. Because work during a red flag is disallowed by IndyCar Series rules, Rossi and Hinchcliffe, who also performed service to his damaged racecar, were assessed a whopping 10-lap penalty.

Forty-five minutes later, the race went back to green with Pagenaud at the head of the field. The Frenchman was able to jump his teammate at the start of the race, who then fell back to third behind Dixon once the race was restarted.

With the cars now spread out on the lengthy 2.5-mile speedway, the field settled in for 500 miles of racing. Throughout the opening stint, Pagenaud and Dixon stretched out a lead–nearly three seconds–over Newgarden, before several drivers started to duck into pit-lane for their first stops of the afternoon.

Zach Veach, running in the top 10 at the time, was the first to stop for new Firestone Firehawks and a fresh load of fuel, slotting in directly between the two leaders. The dirty air backed Dixon up to Newgarden, who had spent much of the stint holding off Graham Rahal.

Pagenaud was the first of the leaders to make the dive for pit-lane, stopping a lap before Dixon and two before Newgarden. The undercut proved to be the strategy early, as Santino Ferrucci, who entered the pits in fifth, leapfrogged everyone but Pagenaud. Newgarden, meanwhile, fell back to seventh after the field had cycled through.

But then Will Power, who had to make an early pit stop for new tires, caught a major break when Spencer Pigot slammed the turn one wall. Power, who had just rolled to a stop on pit-lane when the yellow flag came out, emerged from his stop in second, just behind Pagenaud.

When the race went back to green, the two teammates started to scrap for the lead, with the Aussie momentarily stealing away the point until Pagenaud quickly snatched it back.

A quarter of the way through the race, the top four–the Penske teammates, Dixon and Ferrucci–started to stretch their lead, putting a five second gap on Marcus Erricsson, running fifth in his Arrow SPM Honda, who was holding up Sebastian Bourdais, Newgarden and Colton Herta.

On Lap 66, mired back in sixth almost ten seconds off the lead, Newgarden played the strategy card and made his second stop of the afternoon. Soon after, the leaders also made their way to pit-lane, as looming weather started to play a factor.

But just as a well-timed yellow brought Power to the front of the field, another sent him plunging back down the order. Herta, running inside the top 10 at the time, lost control of his Harding-Steinbrenner Honda in traffic, smacking the wall and bringing out another caution period before the 2014 series champion could get to pit-lane. When all was said and done, Dixon emerged in the lead while Power rejoined the race back in seventh.

Potentially a championship-defining moment for Alexander Rossi and Andretti Autosport.

After the Lap 1 crash, the team got to work to get Rossi back on track at @PoconoRaceway. pic.twitter.com/LBYIf9TI1E

On lap 79, Rossi rolled his repaired Andretti-Autosport machine back out on to pit lane, hoping to snatch a few more points away from the weekend with just three races left on the calendar. Still second in the points standings, Rossi was able to jump Hinchcliffe in the running order, who had also brought his Dallara back on track, to end his day in 18th position.

The race restarted on lap 83 with Dixon in the lead and Ferrucci and Pagenaud lined up just behind him. The five-time champ held off the rookie at the green flag, who in turn kept the Indianapolis 500 champ behind him. Further back, Ed Carpenter, who had quietly hung near the edge of the top 10 for most of the afternoon, snatched away fourth place from the championship leader.

Power, meanwhile, started to make up for the mistimed pit stop. Still in search of his first win of the year, the Team Penske pilot carved his way back up to fourth, passing Bourdais, Newgarden and Carpenter to pull within sight of the leaders.

But pretty soon it was time for another round of pit stops, which saw Pagenaud slot back in front of the rookie, leaving both with the tall task of tracking down Dixon. Power, who stopped nearly ten laps later than the other frontrunners after re-inheriting the lead, cycled back out ahead of his teammate and took over P2. With the benefit of fresh tires and a speedy Penske Chevrolet underneath him, the 2018 Indianapolis 500 winner seized control of the race, eventually clearing Dixon by over five seconds.

The clouds are rolling in.

If they stay, Will Power would have a win in @IndyCar for the 13th year in a row. pic.twitter.com/USgjMywywX

It proved to be the decisive move, as lightning brought out the second red-flag of the day on lap 129, putting an early end to the race as heavy thunderstorms rolled into the area.

Dixon, who was battling some handling issues in the closing stages of the race, was able to hang on for another second place finish, while Pagenaud denied Ferrucci a chance at his first career podium. Behind the rookie, Newgarden was able to jump his former boss during his last pit stop and took home another top five, his 11th of the year.

Now with just three races left on the schedule, each of the four drivers in contention for the title

While Rossi’s misfortune did help Newgarden extend his points lead to 35 points, the championship race did tighten as a whole, as Pagenaud and Dixon both made gains on the Penske pilot. Dixon, after rattling off a string of three second place finishes in four races–accompanied by his win at Mid-Ohio, is now just 52 points out of first place, while Pagenaud is only 40 astray of claiming his second title.

Next week the series heads to World Wide Technology Raceway at Gateway for the final oval race of the season, which was the site of Newgarden’s final and decisive win in his 2017 title campaign. When they arrive at the Madison, Illinois track, Rossi, Pagenaud and Dixon will have just three more chances to cut into Newgarden’s league before the season ends at WeatherTech Raceway Laguna Seca in Septemberr

so how many more guys is sato going to maim or compromise before someone says enough?
how much money is this guy bringing?
and is it really enough?

F1 gets carried away with their penalties on how drivers engage on the track, but I think Indycar needs to sit Sato (or perhaps the entire team) for a race on this one. There is no way, at this level, to excuse blatantly turning left into the side of a car on a superspeedway. I can’t fathom how Sato thought he was clear in any way, shape or form. If his spotter told him he was clear, that guy should be fired, or at least required to undergo a stringent eye exam before being allowed to spot again.

I have been impressed by Ferrucci, kid has a good head on his shoulders. Actually, I’m pretty pleased with all of this years rookie class – they’ve raced pretty smart all year. Every rookie will make a mistake here and there, but for the most part they’ve been really clean. The future appears bright for Indycar as these guys mature and hone their skills in an already competitive environment. I’m kinda sad there’s only 3 races left in this season… :-(

This race should of been red flagged before they crossed the start/finish line on lap one. How could they let the race cars run through that wreckage under a yellow? Terrible decision by race control. It should of been a complete restart with the option to go to their back up cars or allowed to work on the battered cars under the red flag without a penalty. A ten lap penalty is ridiculous. You’re only hurting the fans.

Sato needs to be set down. Marco needs to quit embarrassing his family name. Did AJ not really come because his cars would run last like they said on TV. I remember AJ winning this race during the USAC/CART split. Of course he was racing against Dirt Champ Cars that filled the field.