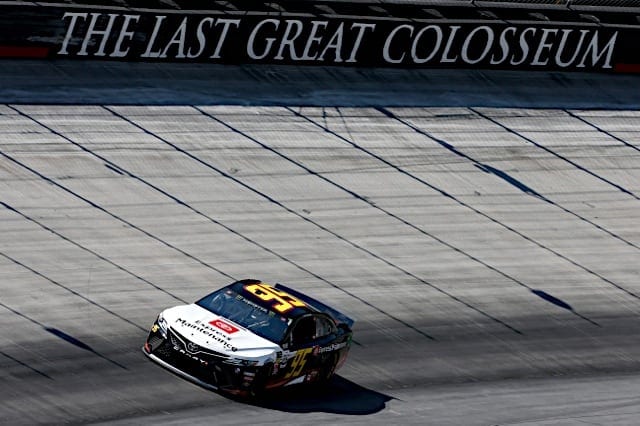 Matt DiBenedetto is driving like his career depends on it. Well, it sort of does, but the world is getting a really good look at how competitive the fire in him is and how impressive he can be when he turns that pressure into motivation.

More than three years after DiBenedetto introduced himself to the world by finishing sixth at Bristol in a BK Racing car, he was back in the spotlight at the concrete half-mile. DiBenedetto finished second on Saturday night and nearly held off Denny Hamlin for the win. The No. 95 Leavine Family Racing driver was fast all weekend, practicing and qualifying his Toyota in the top 10. In fact, had he not glanced off Ryan Newman‘s lapped car, its it’s possible that Hamlin never would’ve gotten to his bumper.

After the race, DiBenedetto was greeted by a thunderous ovation from the crowd of nearly 100,000 fans. He spoke about the emotions of not getting the win but still running so well.

“I don’t even know what to say. I’m so sad we didn’t win, but proud, proud of the effort. I got tight there from the damage from trying to get by [Ryan] Newman and that immediately flipped a switch and got tight. Man, this opportunity has been — that’s what I want everybody to know, how thankful I am that I got this opportunity and to work with great people like “Wheels” [Mike Wheeler], my crew chief. I am so thankful everyone on this team gave me this opportunity; all of our sponsors, ProCore, Dumont Jet, Anest Iwata spray equipment, Toyota for backing me this year, everybody at Leavine Family Racing.

“I want to try not to get emotional, but it’s been a tough week and I want to stick around and I want to win. That’s all I want to do is win in the Cup Series and we were close. It’s so hard to be that close, but it’s neat to race door-to-door with Denny Hamlin, someone who I’ve been a fan of since I was a kid.  It’s amazing. Great day, but this one is going to hurt for sure.”

ALBINO: DiBenedetto on missing out on win — ‘I wanted it so bad’

Behind DiBenedetto, Bubba Wallace held a pretty wheel all night, steering his Richard Petty Motorsports No. 43 to a 14th-place finish. The showing was his best of the 2019 season and just his fourth top 20 this year.

The Xfinity Series hit the high banks on Friday night, with the underdogs enjoying a good bit of success. Jeremy Clements came home in the fourth position, his first top five since his stunning win at Road America two years ago. Gray Gaulding earned a sixth-place finish, while Timmy Hill was seventh. Brandon Brown took the checkered flag in 12th, Shane Lee finished 14th and Ray Black Jr. ended the night in 15th.

The NASCAR Gander Outdoors Truck Series served as the appetizer of the Bristol trifecta on Thursday night. Ross Chastain was in contention all night is his Niece Motorsports truck, winding up in third at the checkered. Further back, Parker Kligerman claimed the 13th position, while Ryan Sieg was 14th and Austin Wayne Self wound up 15th at the finish.

In 2005, Clay Andrews started a Busch Series (now Xfinity) team by cobbling together some refurbished equipment and a mostly volunteer crew. He hired an essentially unknown driver named David Gilliland to run the car on a part-time basis. The results were awful. In the first five starts, the team failed to finish three times and wound up 29th and 30th in the other two. The only bright spot was an 11th-place starting spot in April at Texas.

Then came race number six on the agenda: Kentucky Speedway in June. Gilliland pulled a bit of a surprise early in the going, qualifying fourth for the fledgling organization. But that was only a footnote compared to what would come in the race.

The majority of the race featured the usual contenders, with Cup stars Kyle Busch, Denny Hamlin, Kevin Harvick and Greg Biffle leading the way. JJ Yeley took the lead late and appeared to have things in hand until a late race caution brought the field to his bumper with 16 laps remaining. Gilliland got a great restart and zipped past Yeley with 11 to go. He held on through another restart with just six to go and flashed across the line to land what to this day many still consider the biggest upset in series history.

Gilliland got a huge opportunity out of his one incredible win. He was hired by Robert Yates to replace Elliott Sadler in the No. 38 Ford midway through the 2006 season. Gilliland won a pole at Talladega and the 2007 Daytona 500, but it never turned into much success. He was released from Yates after the 2008 season and ran for a variety of lower budget teams. Gilliland still races in occasional truck series events while helping his son Todd Gilliland break into NASCAR. He is also majority owner in DGR-Crosley Racing, a late model and Truck Series team.

Clay Andrews Racing folded at the end of the 2006 season, becoming a mere memory before the ripples from its stunning upset had even subsided.

Pure class as always @mattdracing… he went over to congratulate race winner @dennyhamlin after the two had quite a battle for the lead. Touching moment to say the least. pic.twitter.com/yKVyNctn6B

Dang what a great day @BMSupdates yesterday at my fav short track! Qualified 5th and came home P4 in the @Repairable1 @TeamChevy. I’m super proud of our small team. It means a lot to run that good against the big teams. Now let’s go get that ? next week at @roadamerica! I’m rdy! pic.twitter.com/GyOPrqlhdR

Wow what a race!!! Finished 7th with our Toyota Tsusho Supra! Couldn’t have done it without the collaboration of @Hattori_Racing & @MBMMotorsports! They prepared me a really good driving race car! Fun to earn a top ten finish tonight!

"I have no idea what I'm doing."@BubbaWallace, full-time @NASCAR driver, part-time photographer, and tattoo enthusiast. pic.twitter.com/KTFXoAA8y1