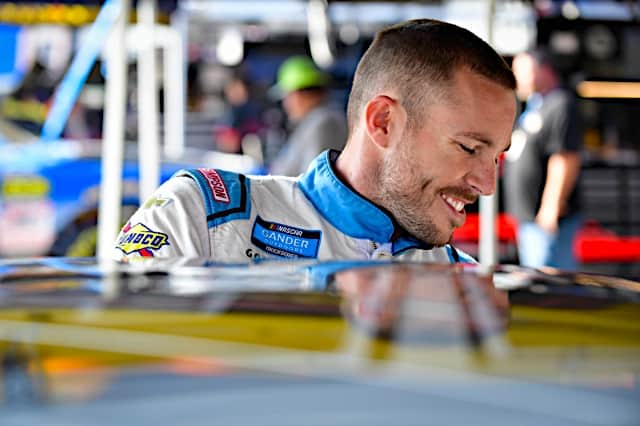 If you think about it, the most exciting racing occurs as a result of driver aggression, with drivers dive-bombing their cars into corners, not sure if they will make it out the other end.

If drivers get after it, and are constantly aggressive and making daring moves throughout the event, this always makes the race more exciting and entertaining.

However, there are also times where drivers cross the line.

Where do we draw the line of being too aggressive? Is intentional wrecking acceptable and part of the sport? Or is it a dangerous habit that needs to be nipped in the bud as soon as possible?

Switching gears, with the playoff picture heating up as we enter the final two races in the regular season in the Monster Energy NASCAR Cup Series, there are several surprises right now as to who is out and who is in. Two of the drivers on the bubble and outside of the cutoff are Jimmie Johnson and Clint Bowyer.

Which postseason absence would be most surprising? Can one of them squeak in some momentum before Indianapolis? Who has the better chance?

Q: Where do you draw the line of being too aggressive as a racer? Brian F., Orlando, FL

A: Being an aggressive racer is a good trait to have. There is nothing wrong with it — often the most successful drivers are also the most aggressive.

An example of being too aggressive is intentional wrecking or the “dump and run”. I understand retaliation is part of the sport, and if you’re a driver who has been on the wrong end of an encounters, then of course you will want payback. That is, in my mind, acceptable to an extent. Where I draw the line is dumping somebody for a win, especially if the opposing individual has not been racing that way.

A lot of talk surrounded Ross Chastain and his aggressive nature after the Gander Outdoors Truck Series race at Bristol Motor Speedway. He is always aggressive, but after his run-in with Raphael Lessard and some others that night, many were frustrated with how he raced. He openly made a mistake and raced hard all night long. I had no issue with his actions in that race, and it led him to a top-five finish.

If you take aggression like that out of racing, it would be boring, right? You have to have some form of aggression in every form of racing for it to be interesting. If we had plain, conservative racers, I don’t think we’d see the kind of action that we are often treated to. The ability to race hard but smart is what separates the good from the great.

We all hate to see wrecking, especially if it endangers someone else at a high level. You draw the line right there. If a driver is going to retaliate, do it in a way where no one else is endangered.

And to all of those hard-chargers out there, keep it up! The sport is more exciting and entertaining with you in it.

Q: Which driver missing the playoffs would be more of a surprise, Jimmie Johnson or Clint Bowyer (both outside now)? Pam S., Bowling Green, KY

A: Johnson, no question about it. Even though Stewart-Haas Racing was the best team last season with multiple victories, the organization hasn’t had the year it thought it would in 2019. Johnson, on the other hand, was virtually unstoppable in the not-too-distant past.

We are living in a world where a seven-time champion is in danger of missing the playoffs altogether with the same team that he has been with his entire career. It’s a pretty crazy thing to think about; to have him miss the postseason would be one of the biggest shockers of this decade. Just think, Johnson is the man who only nine years ago won his fifth straight championship. Now, with the season he has had, he may miss the playoffs.

Bowyer missing it would be a shock as well though. After such a successful season last year, he has had a dismal summer stretch. Bad luck has plagued the No. 14 team and it has led to him being just barely outside of the cutoff line. Bristol seemed to be a starting point for that team so it is possible that he could go on a small streak the last two races before the playoffs to sneak in over his teammate, Daniel Suarez, or Ryan Newman.

There is still a chance both make it, whether on points or with a victory. They are both within striking distance as long as they keep their noses clean. If someone like Suarez or Newman falters, Johnson or Bowyer will be right there to pounce.

Do I think Johnson makes it? I am going to be bold and say yes, he finds a way to do so. He has a large point margin for two races to go, and if anybody can do it, he can. Stay tuned, he may just shock us and steal a win at either Darlington or Indianapolis.

Jimmie will not “steal” a win this year or next. Haven’t you been paying attention at all. JJ can’t be competitive in these lighter cars and he realizes this. Next year be Jimmie s last. He will take his 10 million in salary, finish races just like he has the last 2 years, and ride off into the sunset. Nobody could stop jimmies dominance so nascar did with this car. It’s easy to see if you have been paying attention. And I’m a JJ fan.

Johnson’s career started slowing down in 2017 when NASCAR tightened-up their inspections. Knaus was notorious for being able to sneak “enhancements” through the pre-high tech inspection station process. Was Knaus the only offender? Certainly not, but his reputation put a target on his back with NASCAR. That and NASCAR knew that a large portion of their fan base hit the exits when Johnson was on his 5-consecutive-titles run and didn’t want a repeat.

After a frustrating 2018, Rick Hendrick decided to “break up the band” and essentially gave Johnson a new team that had a strange resemblance to the Hendrick’s #25, perpetually-snake-bit “ghost team”. For some reason a mildly-successful Xfinity team crew chief was given the nod to prepare cars for Johnson. Disappointing results predictably followed. Now Johnson has a guy who has never been a crew chief in any of NASCAR’s major touring series, so the performance hasn’t yet improved.

Jeff Gluck of The Athletic made a good observation that Johnson was more successful driving a high-horsepower/low-downforce car and he is having trouble adapting to the newer, low-horsepower/high-downforce package. Add to that his team are not giving him cars that have top-5 speed and it sounds like a recipe for a DNQ for the “playoffs”.

It’s worth repeating that the late event “cautions” that gave him 7 Chase wins have dried up. It seems even Brian didn’t want him to get number 8.

Ross has been using guys up everywhere he drives, which is fine. Nice thing about racing is all the cars are out there every week, so they tend to take care of business themselves over time.

Agreed on Jimmie, but it’s not just him they set out to stop, but HMS in general. I’m an HMS fan and even I don’t want to see any one driver or team dominate too much – it get’s really boring. But it’s no coincidence that soon after the Toyota drivers were seen complaining about not having the horsepower to compete (and then having engines blowing up when they tried pushing the envelope) that NASCAR effectively neutered the engines themselves. So much for the advantage of having Hendrick engines.. (or Yates for that matter) and now Toyota dominates. If history repeats – and the France family tend to be predictable – eventually they will take steps to shift the advantage again.. don’t be shocked if next year someone like Byron breaks out with a bunch of wins and on it goes.

No fan of HMS. But the fact that TOYS engines were blowing up right and left for some time and NASCAR i.e. BZF I suspect totally turned the CUP series on it head by lowering the HP to accommodate the inadequate TOYOTA aholes!!!!!! Then the BIG SPONSORSHIP at DAYTONA, DAYTON RISING! Toyota IMO could not compete in CUP. IN CUP IS KEY! BZF started handing out TOYS participation trophies with glee. And it continues. IMO! The fact that one brand engines were going BOOM at that drop of a hat, and they were many booms…The whole industry had to adapt, at their expense!

Toys reminds me (analogy wise) of a fugly fat kid who eats his boogers in kindergarten, the “normal” kids want nothing to do with him. His mother (TOYS) complains to the private school principal (BZF) that her tuition times XTRA ( donation for the new nutrition center, which was supposed to “help” her fatty)! The DONATION was going to be taken back if something is not done!!!!!!!!! BZF said hello TOYOTA!!!!!!!!!!!!!! IMO.

In my mind, TOYS still cannot compete to where the HP was before BZF wanted it like the kiddie series to appease his biggest mutual love fest. Sick. IMO of course!

Amen! The manipulation for this clown to get his wins and the all mighty “7 Time” is embarrassing. Jimmie had no game in his “7 Time” win. Not a one. But BZF had a script. It came very late in the race when Team Penske member Joey Logano had it, until Cousin dove down on him. Cousin did go right away and apologize to Todd Gordon, Logano’s crew chief. I wonder why that was, and Carl (a good man) stop racing. HMMM. My O!

Jeff Gluck is quoting old news and facts, from other sources. Unless you are quoting “Old Jeff” Those truths have been around before Jeff has been with his latest alliance (Jeffs, cough whatever). Jimmie’s “success” if you call it that was a manufactured dream. IMO. For some reason NASCAR (imo BZF) hitched their wagon on Jimmie Johnson. That they hitched for years. Rick (the pardoned felon, Bill Clinton) no doubt has a huge impact as to how Jimmie came to be, IMO. It sure isn’t his mix it up racer upon racer driving. Ahem…I will stop now.