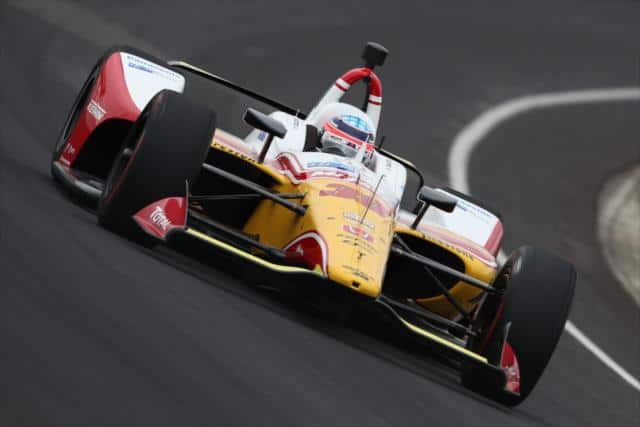 Rahal Letterman Lanigan Racing released a statement Tuesday (Aug. 20) on Sunday’s violent IndyCar Series crash at Pocono Raceway, an incident that saw Felix Rosenqvist’s No. 10 get into the catch fence and Takuma Sato’s No. 30 machine flip over.

The team has issued a statement in regard to the opening lap crash at Pocono Raceway.

The statement can be found here: https://t.co/5Nc7HWIS8y

We stand behind our drivers and have absolute faith in their ability to race and perform at the highest level for RLL. pic.twitter.com/8WusnDI6bJ

The initial reaction from viewers and social media blamed Sato for the incident – he, Alexander Rossi and Ryan Hunter-Reay were three-wide on the straightaway when Sato and Rossi made contact, turning both cars down into Hunter-Reay’s machine.

Sato and Hunter-Reay slid down to the inside wall, sliding back up into traffic, where Rosenqvist became involved – clipping Sato and lifting Rosenqvist into the air, where his car caught the catch fence.

The team’s statement addressed the criticism pointed at Sato, also including Sato’s raw on-board footage of the crash.

“Normally in a situation of this nature it is not necessary for a team to comment but following the accusations levied at Takuma, and after reviewing Takuma’s onboard data and camera, we feel that a clarification is necessary,” the release said. “The data and video clearly shows that Takuma did not turn down the track into Alexander in this incident and in fact the first steering wheel movement made by Takuma was to the right, as he tried to correct his car after the initial contact.”

The team attributed the crash to being a part of the series’ racing, deeming it a “racing incident.”

Rossi’s involvement in the crash caused the driver to lose valuable championship points to standings leader Josef Newgarden, and this was a primary crux of the criticism – the championship implications of the wreck.

“This was a racing incident which unfortunately may have some championship implications,” the statement said. “A crash at Pocono impacted our title aspirations in 2015 while second in the standings so we know the frustration drivers and teams experienced. ”

The team closed the statement by thanking the quick responders on the AMR Safety Team at the track.

IndyCar’s next event will be on Saturday, Aug. 24 at World Wide Technology Raceway at Gateway Motorsports Park, starting at 8 p.m.

I finally saw a couple of in-car videos on youtube (one of Sato, one of Rossi). LHR is correct in that Sato did not turn down into Rossi – while technically correct, it does not tell the whole story.

Coming up on Rossi, Sato make two very minor left turns of the wheel (looks like moving into position to maybe side-draft to make the pass). They were very, very minor corrections.

Rossi was just passed by Dixon (also very close on the RF to LR wheels). I do not see Rossi move his line after that pass – although it does appear he is not running perfectly parallel to the wall. His car is going straight, but pointed slightly toward the wall. This trajectory is set and held prior to Sato getting to him – most likely due to realization cars are coming fast on both sides – he couldn’t move right nor left.

In the end, I still think it is on Sato to recognize Rossi’s trajectory and make sure he clears the car.