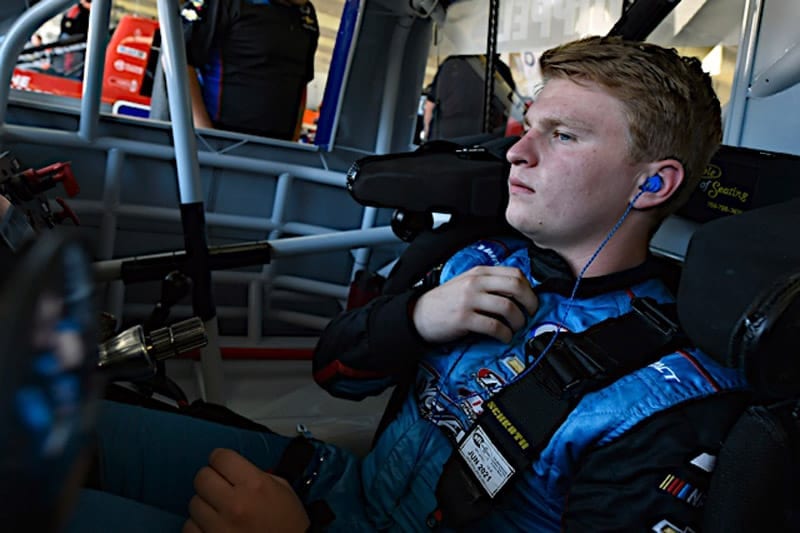 Tyler Dippel is currently competing in his rookie season in the NASCAR Gander Outdoors Truck Series. He made his series debut at Eldora Speedway last July, running for DGR-Crosley where he finished an impressive 13th. Fast forward to the final four races on the 2018 schedule and Dippel ran the No. 25 Chevrolet in place of Dalton Sargeant, who left the team following the beginning of the playoffs. He posted a pair of 14th-place results, along with a 15th and a 17th to close out the year.

Prior to joining the Truck Series, Dippel ran three full-time series in the K&N Pro Series East with a best finish in the standings of second in 2016 and 2018. Through 40 career starts he had two wins, nine top fives and 21 top 10s.

Driving the No. 02 Chevrolet, the 19-year-old from Walkill, NY finished the Truck Series regular season 13th in the standings with three top 10s, including a career-best third-place finish at Michigan International Speedway. Before that career-best run, Dippel talked to Frontstretch about his rookie season and lessons learned.

Mark Kristl, Frontstretch: You are 11th in the point standings. What’s your goal to finish this season?

Tyler Dippel: Obviously it’s to win and make the playoffs. It hurts me not having raced anything here before but the No. 02 Chevrolet unloaded capable of winning. I’ll have to be in the right spot at the right time though. I’ve been learning the air better at these big tracks every week. So I’d like to finish in the top eight in the points which means we made the playoffs.

In case we don’t win, then finishing top 10 in points is the goal.

Kristl: What do you need to be able to compete for wins the rest of this season?

Dippel: I think we’re pretty close. We ended up fourth in the first practice. We need a tiny bit but the No. 02 Chevrolet is pretty close to winning right now. For competing down the road, it’s just been me learning the air on the 1.5-mile tracks. It’s been pretty big (learning experience). I’m getting a pretty good handle on the tracks during the second half of the season now. The guys are doing a better job too. Our trucks have been a lot better. I’ve been getting better. Our results have been not so much showing but we’re running a lot better the last six 1.5-mile races.

Kristl: During the 2019 Eldora Dirt Derby, you received some TV mentions. Michael Waltrip commented how if you won, it would really throw a monkey wrench into the playoffs. The other announcer said something along the lines of, “But he sure would like to win it!” How big was the Eldora Dirt Derby for you?

Dippel: Eldora was good for us to have good strong runs like that. We want to keep that momentum going every week and consistently be running in the top five or top 10. That’s where we need to compete for wins.

Kristl: Does Young’s Motorsports have any manufacturer support or alliances with other teams?

Dippel: We don’t have any alliances with other teams. Chevrolet helps the team out by giving them wind tunnel dates and stuff like that.

Kristl: What’s the most important lesson you’ve learned this season?

Dippel: It’s about the air because I’ve never raced anything bigger than one mile coming into this season. It’s been all about learning the air game this season for me. I’ve ran some ARCA Menards Series races but not any big tracks ARCA races.

Kristl: How does it feel to be below the playoff cut line? How aware are you of the points situation?

Dippel: I’m aware of it. It doesn’t really change how I go into next week. My goal is always to win the race so it doesn’t really change anything. I may be a bit more aggressive. I’m willing to do whatever it takes to make it in there (the playoffs). Michigan is my only chance and a couple other guys are in the same boat as I am. The Corrigan Oil 200 will probably be pretty dicey.

Indeed, Dippel was correct. There were eight caution flags for 35 laps over the 105 lap race. His team owner Tyler Young was pumped with Dippel’s career-best Truck Series finish.

What a day!!!!! I’m pumped I got the best guys in the garage they work their ass off every week!!!!!! P3 ran up front all day great driving by my man Tyler Dippel ????

Kristl: What racetrack are you looking forward to for the rest of this season?

Dippel: Homestead-Miami Speedway just because it’s so worn out. It’s a driver’s track and I think that makes it more badass how much you can move around so much there. I’d said Bristol Motor Speedway is a close second.

Kristl: You lead the three Young’s Motorsports drivers in the point standings. What does it say about you and the team?

Dippel: [Chuckling] It’s cool to be first in the team. You always want to outperform your teammates. It makes you look the best.

Kristl: Are there any bragging rights on the line?

Dippel: [Grinning] I’ll just throw it out there, we pretty much beat ’em every week. Right now, I have the bragging rights.

Kristl: As the season is coming closer toward its end, any plans for the 2020 season?

Dippel: I haven’t really started working on it yet. It’s sponsorship-dependent for me so I’m sure I’ll start working on it in the next month or so.

Kristl: Is the goal to stay in the Truck Series?

Dippel: I don’t have a direction yet but I’d probably say I’ll stay in Trucks. I’m not really sure yet though.

Kristl: Detroit is referred to as the Motor City, known for its cars. What was your first car? What’s your dream car?

Dippel: My first car was when I was 16 I drove around in a Kia Sorrento. Now I drive a Chevy Silverado 1500. With unlimited money, I’d buy a Lamborghini Aventador. I’ve liked those since I was a kid.