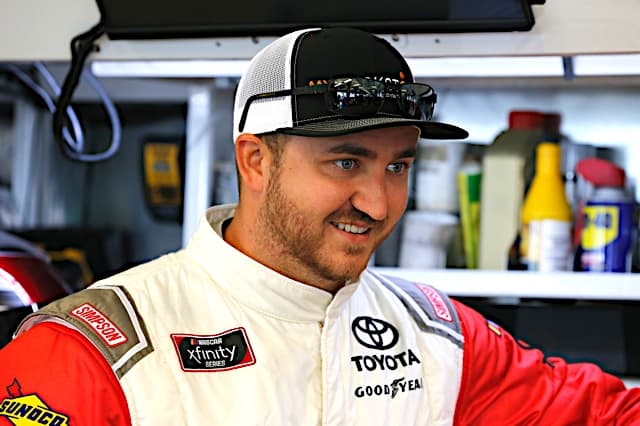 When Shane Lee and H2 Motorsports — a new NASCAR Xfinity Series team — announced they were going to run the second half of the 2019 season, many people didn’t think they’d make it to the first race.

Now seven races in, not only have they made it, but five top-20 finishes have the team rolling.

Lee, 26, is in his second season as a part-time Xfinity driver. Last year, he competed in 13 races for Richard Childress Racing with a best outing of fourth at Kansas Speedway.

The team is owned by Matt Hurley, an entrepreneur and venture capitalist, had been looking to make a sports play for some time. Prior to coming to NASCAR, Hurley admits he looked at joining other sports despite growing up an avid race fan.

Through seven races this season, including two races at Iowa Speedway, the team has a best finish of seventh in late July at Iowa. An average finish of 18th isn’t what the team wants, but Lee knows it’s going to get better.

“It’s gone pretty good,” Lee said of his experience with H2M this season. “The first two or three races, every one of the first practices got rained out, so we never got a full practice session. We ran right there around 16th to 18th — it really wasn’t that great, but nothing broke and we finished the race.”

Lee came into the season not knowing if he was going to race at all in 2019. RCR signed Tyler Reddick for 2019 and was only going to run one full-time Xfinity team. It got to a point where the Newton, N.C., native thought it was time to move on.

“I had actually met Matt through RCR last year,” Lee said. “Matt started talking about running his own team, and if that didn’t come through I wasn’t going to be racing, I was going to go do something else. I still have an engineering degree that I could use.

“Even though this is a new team and the finishes haven’t been that good, I know it’s going to get better. I wasn’t going to go nowhere where running 20th is all you could do. I was just going to get a regular job and move on from that.

“Too competitive. I hate finishing 15th, let alone finishing 25th every week and knowing that’s as good as you’re going to do. This, even though we’re finishing 16th, I know it’s going to get better.”

Hurley, on the other hand, recalls having to convince Lee that joining H2M was going to be a step in the right direction. And it was indeed a tough sell because the team hadn’t even purchased its first chassis (they’re now sitting at a comfortable three).

In 20 career Xfinity starts, Lee has just a pair of DNFs: he crashed out with Daniel Hemric last year at Las Vegas Motor Speedway and the No. 28 team’s engine expired last month at New Hampshire Motor Speedway.

Lee’s consistency was one of the traits that attracted Hurley to the driver.

“If you look at him, from a speed standpoint, he’s someone that has always carried speed,” Hurley mentioned. “He’s always qualified well, always practiced up there. We knew he was a wheel-man that could lay down laps and was aggressive.

“The biggest thing, too, was professionalism. He knows how to be professional on the track. He’s not a liability that you worry about getting into other types of trouble. With us trying to build a program for the future, those were all things that were important.”

Currently, H2M has roughly 12-14 employees. That number is expected to double, possibly even triple over the offseason.

Even though the team is new blood to the series, there have been struggles – one of which is they are a Toyota team without a technical alliance despite Toyota Racing Development being an integral partner.

“I’m trying to build this to be a long-term, competitive franchise, not a spin-off team,” Hurley added. “It’s really easy if you want to spend money to get used cars from the top teams out there and go lay down a lap. Look at Erik Jones laying down a lap for a new Xfinity team [Xtreme Concepts Racing], but it’s all JGR [Joe Gibbs Racing] employees.

“We have no technical alliance. This is 100% organic, which for us, running where we’re running is pretty rare. That’s the biggest thing, trying to build for the future. I think people outside the sport don’t understand that you don’t just hop in the car and win.”

At 23 years old, Hurley began his tenure among the youngest team owners in NASCAR history. Dependent upon sponsorship — which hasn’t been an issue for the team thus far by bringing back Circuit City after more than a 10-year NASCAR hiatus — the owner sees this team expanding to two cars as soon as 2020.

Lee echos his team owner’s comments, mentioning a teammate would be helpful for the No. 28 car.

“I’m signed to run with them all of next year,” he said. “If they can get the funding to run a second team, it would be better for the whole organization. I would like to have a teammate. It would definitely help this, being able to run two setups.”

The series heads to Road America this weekend, where H2M will miss its third race of the month. The team has elected to skip the road courses (though they intend to run the Charlotte Motor Speedway ROVAL in September) to preserve their equipment. The team finished 13th at Bristol Motor Speedway last weekend.