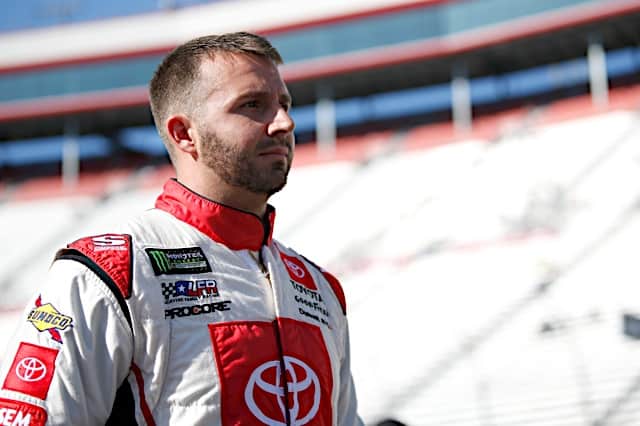 Is anyone else going to enjoy a weekend off from Monster Energy NASCAR Cup Series racing? Me neither, I was only checking on you.

Real NASCAR fans would love to see 52 weeks of NASCAR Cup racing. But the competitors do need a break, and maybe the reality is that a little less NASCAR racing might be good for the health of the sport without cutting into the fan base. Formula One and the NTT IndyCar Series do a good job of making their series a little scarce, and Formula One has done a good job capitalizing on that scarcity.

“Change is inevitable except from a vending machine.” – Robert Gallagher

Each week, we hear more rumors about changes coming to NASCAR. The rumors have covered possible changes to everything with the car, the schedule and the rules going forward. There is no doubt that NASCAR is headed toward huge changes, and most of those are the result of money.

Turn back the clock a few years and the points fund was $75 million a year thanks to the Sprint sponsorship. NASCAR brass has been very secretive about how little Monster Energy is paying right now after bragging before Sprint left that their next deal would be over $100 million per year.

Thankfully, the television deal was amazing thanks to the emergence of a new sports channel wanting to make a big splash. But with television ratings so-so and attendance at the tracks so-so, that means a further drop in sponsorship will lead to more woes for NASCAR teams.

The next generation of racecar needs to garner more corporate support from the auto manufacturers or the teams will be in for big financial issues. Some of the changes like adding hybrid technology to the cars goes against what so many people fell in love with about NASCAR racing. As high-tech as this sport has become, the basic engine technology and rear-end gear parts still date back to a much earlier time in NASCAR history. Yes, technology has modernized them, but they no longer offer the manufacturers a testing ground for current product. We might not want to see all the changes coming to NASCAR but the alternative might be even worse. The more things change, though, the more NASCAR might distance themselves from the old-school fans that helped build the sport over so many years.

Each sport has its famous sound – the crack of the bat in baseball; the swoosh of the net in basketball; the thud of a hard hit in football. Even each type of racing has its particular sound. Before each NASCAR race, as the television pit-road reporters are setting up the broadcast, you hear the sound of NASCAR – the impact wrench hitting five lug nuts! This week, rumors hit the media that Goodyear and NASCAR might be making huge changes to the next generation of tires and how they are put on the cars. Instead of the current five lug nut system, NASCAR might switch to a single nut assembly in the middle of the wheel.

While this is the norm in most forms of racing, the closest in weight to a NASCAR car using this method is a much lighter sports car. The stress on the hubs in sports car racing are not all loaded up in one direction as they are on a high-banked NASCAR superspeedway either. While I am sure the engineers in the sport have managed this problem, this move would remove the famous sound that instantly identifies that a NASCAR race is about to happen.

“Money buys speed. How fast do you want to go?” – Banjo Matthews

Edwin Keith “Banjo” Matthews coined that phrase during the early days of NASCAR to promote his performance center. This mechanical genius was called the “Henry Ford of NASCAR” by none other than the legendary Smokey Yunick, who knew a thing or two about speed himself.

While the cost of racing in NASCAR has skyrocketed over the years, that old adage is just as true today as witnessed by how tough it is for a small team in the sport to take down the big dogs. The first time I saw Matt Guido DiBenedetto race at a short track in North Carolina in a late model stock car, I knew this kid was special. It’s that same effect when you watch a high school football team and you don’t need a program to identify the kid going to Alabama on a scholarship next season — his ability stands out that much.

The fans went nuts when Guido finished second last week at Bristol Motor Speedway, coming so close to punching his ticket to the NASCAR Cup playoffs with a small team that just announced he is not coming back next season. While NASCAR fans all have their favorite driver, their second-favorite is that underdog who has that chance for an unlikely win.

Turn back the clock and an underdog performance like Guido’s Bristol run would catapult him up the ranks of NASCAR with a bigger and better team wanting him next year. But the success of Guido on the track and his failure to be a contender for any seat with a big team is a sign of the times in NASCAR.

Stock-car racing was the last form of major league racing to be dominated by the almighty dollar when it came to driver choice. Owners have realized it’s easier to find a somewhat talented driver with sponsor money or a big checkbook from mom and dad than to find the sponsorship needed to support a poor driver.

As we watch DiBenedetto’s quest for a ride in 2020 and beyond, the “Guido Effect” will show fans how money is 99% of what matters in the sport today.

I’m really not happy about getting rid of the 5 lug nuts. It would just eliminate a lot of the skill involved in pit stops. This is another one I put on the RTA crying about money. The only reason to do is so they don’t have to pay tire changers as much. If the Gen-7 car is supposed to be like their showroom equivalents, this seems to fly in the face of that.