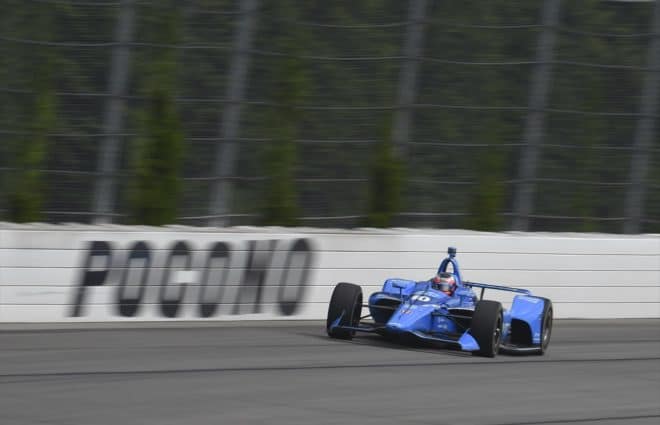 Why does the NTT IndyCar Series go to Pocono Raceway?

No, really. Can somebody give me a good answer to this?

I understand that IndyCar has a legacy of staging races in the Northeast (which is layman’s terms for saying, “muh tradition”). If this is the case, why doesn’t IndyCar return to Watkins Glen International? Or it could go to a number of other road courses in the area, such as Lime Rock Park or New Jersey Motorsports Park.

Let me preface this by stating that I’m sure people love going to Pocono, and that by all accounts, the Mattioli family has always been some of the best/most friendliest track owners in all of racing. But I have no qualms stating that Pocono cannot host another open wheel race.

IndyCar is a death trap on the Tricky Triangle. It’s a miracle that nobody was seriously injured in that lap 1 incident last Sunday — unlike last year, when Robert Wickens went from a very promising IndyCar rookie to having to relearn how to walk after one bad wreck at Pocono.

Anybody who seriously goes, “It’s not Pocono’s fault, those wrecks could have happened anywhere” needs to look in the mirror when they say it. If that’s the case, why does Las Vegas Motor Speedway not host an IndyCar race anymore? “Oh, just one person died” sounds better than, “Oh, just one person died and another one was paralyzed a couple of years afterward.”

And as obviously dangerous IndyCar is on mile-and-a-half ovals, at least Texas Motor Speedway and Las Vegas are/were exciting to watch. When the red flag was finally lifted after cleanup to the fence on Sunday, fans in attendance and watching at home were treated to one of the most forgettable IndyCar oval races in a long time. When rain came and the race was called early, it was clear nobody was missing anything in those last 72 laps not contested.

It’s understandable that Indianapolis Motor Speedway cannot go away from the series despite being somewhat similar to Pocono. Yes, it’s another case of “muh tradition,” but that label is more than earned when said race is arguably the biggest race in the United States every year regardless of series, the most attended event in America every year ,and it has had over 100 years of history attached to it. What’s more is that Indy has proven itself to be safer than Pocono — not by much, granted, but at least nobody’s career has ended on its grounds in quite some time now.

It’s obvious that at this point, Indy should be the only oval a mile-and-a-half or longer that IndyCar visits. The IndyCar schedule should be composed of Richmond Raceway, World Wide Technology Raceway at Gateway, ISM Raceway, the Milwaukee Mile, Iowa Speedway, Indianapolis and 12 road courses. The reality is that most ovals in the United States are ill-suited for IndyCar, and while IndyCar should have more ovals in general, it’s not worth as big a risk as tracks such as Pocono bring to the table.

Who will master Mosport?

This weekend marks the seventh year of NASCAR Gander Outdoors Truck Series racing at Canadian Tire Motorsport Park. The lone national series event in Canada, it has become a gala event on the schedule as both its only road course event and also one of its most exciting tracks in general.

Six drivers have won the six races held at Mosport, with a seventh coming on Sunday due to the lack of previous winners in the field. Of those six, all went on the following season to substantial Xfinity Series competition, with four having gone so far as to have won races at the Monster Energy NASCAR Cup Series level.

Among the regulars, it’s hard to figure out who will be good. Todd Gilliland almost won before being wrecked by his teammate last year. Johnny Sauter has done well but has never won, as has Matt Crafton.

The favorite entering this weekend is probably Alex Tagliani. The former IndyCar star is in the No. 51 Kyle Busch Motorsports Tundra, arguably the best truck of the season, and already has two poles in four starts there in Trucks to go with his win in the accompanying NASCAR Pinty’s Series race last year. Tagliani is definitely getting the best chance he’s ever had at getting that first big league stock car win.

What will be the effects of NASCAR’s slight format changes to NGOTS and NXS competition?

This week, NASCAR announced changes to the Truck and Xfinity series coming in 2020.

The most notable change was that the NXS field has been reduced by two vehicles. The field will now be made up of the 31 fastest qualified cars, four further spots being made up by owner points and the final slot in the field being filled by either a past series champion or, barring that, another team by owner points.

This is actually not that bad a change. Is anybody really going to miss those two extra cars? Those are two cars that were either going to park or be lapped at a constant clip by the much faster leaders. It sucks that those crew jobs are going away, but if the series starts to get more viable teams (and thus jobs) popping up, it’s not like NASCAR can never increase the field size again.

Is NASCAR going to a single lugnut?

It was reported by NBC Sports this week that NASCAR is considering getting rid of the five-lugnut wheel in favor of a one-lugnut wheel.

The change wouldn’t be coming until the new generation of NASCAR stock cars (the Gen 7) rolls out on track in 2021. This rumor comes off the heels of NASCAR’s announcement last week that the Gen 7 would have 18-inch wheels instead of the current standard of 12 inches.

There are positives to this idea, yet also very noticeable negatives. As Nate Ryan notes in his piece, this would reduce the risk of loose wheels, making the sport safer. But how many times do drivers have wrecks due to tires coming apart? Maybe once or twice a season? Usually, if a driver has a loose wheel, they have enough time (or at least sense) to go down pit road to get it changed.

What’s more is that it would take another variable away from any given race. Drivers can and will run away with a race, but an unscheduled pit stop due to a loose wheel can blow the entire race wide open. Making it easier for tire changers to get things right is just going to take that dynamic away. It makes it easier for teams to absolutely dominate races without having to ensure that everything goes according to plan, and would also make it harder for teams to pass each other on pit road outside of strategy calls.

Michael has watched NASCAR for 15 years and began covering the sport five years ago. He is a graduate of Salisbury University and a proud member of the National Motorsports Press Association (NMPA).
Previous Fire on Fridays: We See a Lot of Matt DiBenedetto in Ourselves
Next Jon Bennett To Retire From Prototype Racing, CORE autosport To Pull Out Of DPi