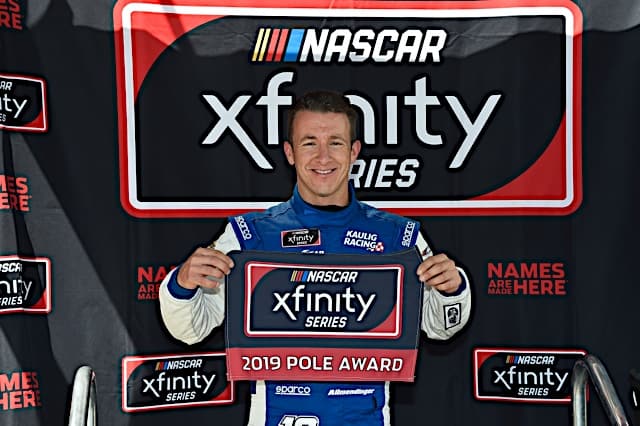 AJ Allmendinger posted the fastest lap in the final round of qualifying to win the pole for Saturday’s CTECH Manufacturing 180 at Road America. His lap speed of 109.792 mph was four tenths of a second faster than Monster Energy Series Cup regular Matt DiBenedetto, who will start on the front row beside Allmendinger.

This is Allmendinger’s second Xfinity career pole. His first pole also came at Road America back in 2013 when he was driving for Team Penske. Allmendinger led 29 of the 55 laps in that event en route to his first victory in the Series. He also won at Mid-Ohio later that season.

This is his fourth race of 2019 with Kaulig Racing and third of four road courses scheduled. He finished third two weeks ago at Mid-Ohio.

DiBenedetto is making his first Xfinity Series start since 2016 and fourth start in Elkhart Lake, Wis. His best finish at the track came in 2014 where he finished 11th for The Motorsports Group.

Bristol winner Tyler Reddick will start sixth, while Allmendinger’s Kaulig Racing teammate Justin Haley qualified seventh. Justin Allgaier, Jeremy Clements, and Chase Briscoe finished up the top 10. Two other drivers who made it to the second round were Kaz Grala (11th) and Christopher Bell, who locked up the brakes twice on his fast lap. If the Joe Gibbs Racing team decides to change Bell’s tires, he’ll have to start the race at the rear. If that were to happen, Bell does have a lot of speed to play.  He was fastest in both practice sessions Friday.

Preston Pardus, who is making his Xfinity Series debut, qualified a strong 15th, ahead of playoff contenders Michael Annett, Ryan Sieg and Brandon Jones.  In Jones’ case, qualifying was the first time he got his backup car on track after crashing in practice.  He qualified 20th, but will fall to the rear on the pace laps.

Aside from drivers locking breaks or drifting slightly off-course, there were no incidents that required stoppage time.

With only 38 teams entered, no drivers failed to qualify.

The CTECH Manufacturing 180 is scheduled to start at 3 p.m. ET.  The race will air live on NBCSN, with radio coverage on MRN Radio affiliates and SiriusXM NASCAR Radio.