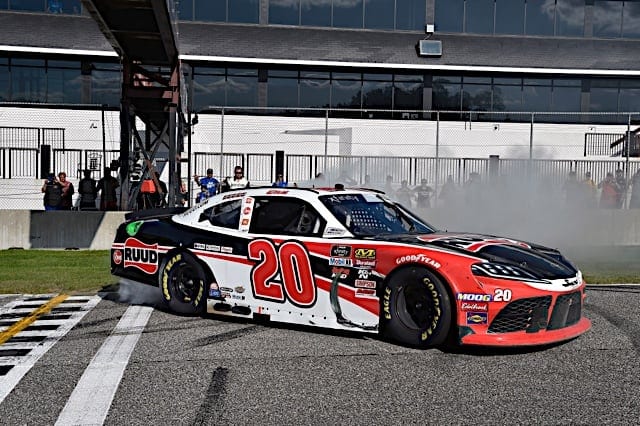 For one who doesn’t think himself to be a road course ringer, Christopher Bell proved he could conquer the right and left turns in the CTECH Manufacturing 180 at Road America.

After starting the Xfinity Series race in 12th, Bell battled handling issues in the first stage but was able to make his way through the field after his first pit stop. His No. 20 Joe Gibbs Racing team worked on the car to make it perform like it did in Friday’s practices, and thanks to some strategy moves, he worked his way to the front.

“I really butchered qualifying and tore the crap out of that left front,” Bell told NBC Sports in victory lane. “I felt like once we got in the race there that I would be able to drive by those guys, and they dropped the green flag and they’re driving by me, so that wasn’t very much fun. I told Jason [Ratcliff], ‘man, I’m just really really tight’ and we got those tires off. He said that the left front was hurt pretty bad, then we got pretty good there when we put our fresh set of tires on. The strategy obviously worked out really good for us pitting there, and then the yellow coming out.

“This Ruud [Toyota] Supra was really fast today, we’ve had a great road course season. I’m really honored to be a part of Joe Gibbs Racing and to get my first road course win is pretty special.”

Bell led 10 laps in the race en route to his sixth win of 2019. He finished second to Austin Cindric at both Watkins Glen and Mid-Ohio — two other road courses — earlier this month.

Cindric had a remarkable comeback on the final two laps around the 4-mile course. After starting 20th on the final restart with fresh tires, Cindric weaved around several cars to finish behind Bell in second. He was also involved in an incident that sent AJ Allmendinger spinning off-track, relegating him to a 24th place finish.

Allmendinger’s Kaulig Racing teammate Justin Haley was sixth. Chase Briscoe was seventh after running in the top five for part of the race. Jeremy Clements finished eighth — his second consecutive top-10 result, as Justin Allgaier and Cole Custer fought back from earlier troubles for the final two positions in the top 10.

On the final lap of stage one, Allgaier spun in turn one in the gravel, but kept it away from the tire barrier. The team made lengthy repairs to the vehicle after blowing a front tire in back-to-back races.

Locked up brakes for @J_Allgaier sends him into the beach on the final lap of #XfinitySeries stage one. pic.twitter.com/PQtl5J7pk7

Allmendinger had led all 10 laps and won the first stage.

After stage two’s restart, Custer suffered some damage to his front end when he mowed down some banners:

Briscoe took the green and white checkered flag in the second stage when the the leaders made their pit stops.

Brandon Jones had a rough weekend; after starting the race at the rear in his backup car, a tire blew and caused damage to his right-front. The No. 19 Toyota finished 16th.

Blown tire for @BrandonJonesRac causes major damage and brings out the #XfinitySeries caution.

How much will this shake things up? pic.twitter.com/BN0YRvykLS

Later on lap 43, Gray Gaulding appeared to lose his brakes and spun out of control in the gravel. His rear-end had some damage due to the wreck, but track officials towed him out and his team made repairs to return to the race.

This is about to get wild, watch the end live on NBCSN >> https://t.co/xLDt60XTxq pic.twitter.com/jrWloGDJg2

After leading the most laps, Matt DiBenedetto lost control on the final turn while running second and finished 27th.

The Xfinity Series heads to Darlington Raceway next week for the VFW Sport Clips Help A Hero 200. The race starts Saturday, Aug. 31 at 4 p.m. ET.