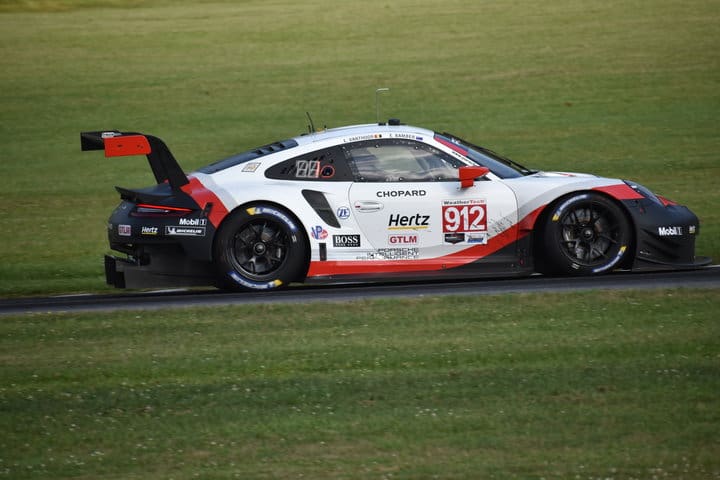 VIRginia International Raceway often brings changeable conditions and Saturday (Aug. 24) was no exception.  Porsche GT Team’s Laurens Vanthoor managed to keep himself on the track and scored the pole for Sunday’s Michelin GT Challenge at VIR with a lap at 116.983 mph.

“It wasn’t very easy because the track [had] some slight wet spots,” Vanthoor said after the session to IMSA Radio’s Shea Adam.  “So the first couple of laps, you’re still trying to figure out where the track is dry.  Especially [since] you have a couple of extra laps of juice in the tires and you’re trying to decide when you want to use them.  You don’t know if there is more rain coming [towards] the track, [or if it] is going to get better.  It’s a little bit of poker, I think.  It worked out well.”

The Porsche dominated much of Friday’s practice time, but things were much closer when it counted.  The track never fully dried during the session, but there was a dry line to get the proper performance out of the Michelins.

Early on, it was Vanthoor’s teammate Nick Tandy that was fastest.  Vanthoor and Corvette Racing’s Jan Magnussen were able to eclipse that time.  Tandy attempted to improve his time, but went wide just prior to the Oak Tree Turn.  That put his left side tires in the wet grass and spun him off into the tires.  Tandy was able to recover his car, but there was a fair amount of damage to the Porsche 911 RSR.

Vanthoor’s lap held up for the pole, but by only eight-hundredths of a second over Magnussen.  Chip Ganassi Racing IMSA’s Ryan Briscoe will start third with teammate Joey Hand alongside.  Oliver Gavin will start fifth in the second Corvette.

In GT Daytona, teams had to contend with a damp race track with rain in the vicinity.  IMSA did not declare a wet session, forcing teams to venture onto the course on slicks.  What followed was some tip-toeing. During the session, times dropped by more than 15 seconds a lap as the dry line developed.

Early on, Paul Miller Racing’s Corey Lewis and Compass Racing’s Matt Plumb were the class of the field.  As the track dried, a different cast of characters came out to play.

Both of the AVS Vasser Sullivan Lexus RCF GT3s were right up there, despite an early off-course excursion for Richard Heistand that clogged the grill of his No. 14 Lexus with grass and mud.  PFAFF Motorsports, coming off of two straight victories, was right up there as well, along with Meyer Shank Racing with Curb-Agajanian’s Trent Hindman.

With the track continuing to dry, it literally came down to who was in position to get one more lap in before time expired.  That just so happened to be PFAFF Motorsports’ Zacharie Robichon.  He put himself on top of the chart with 30 seconds remaining.  On his final lap, he bettered his time with a lap at 111.239 mph to win the GT Daytona pole.

Robichon’s lap was nearly one-third of a second faster than AVS Vasser Sullivan’s Frankie Montecalvo in the No. 12 Lexus.  Heistand, despite all the mud in his grille, ended up third.  Hindman was unable to improve on his final lap and ended up fourth.  Teammate Alice Powell, making her IMSA debut, will start fifth in class.

The Michelin GT Challenge at VIR is scheduled to go green at 1:40 p.m. ET on Sunday.  Coverage from VIR will air live on NBCSN starting at 1:30 p.m.