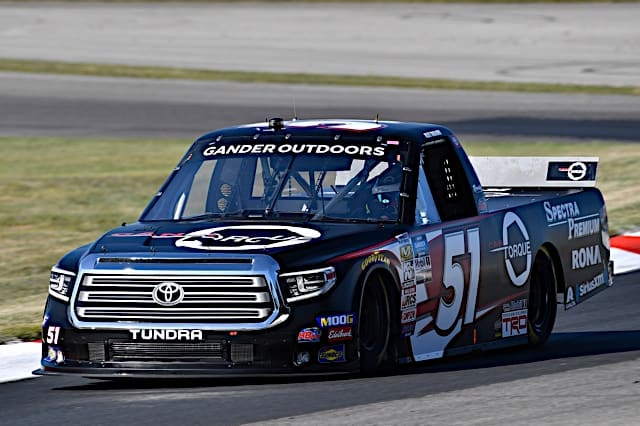 It’s a rare sight as of late to see Alex Tagliani compete in a NASCAR national series event, but on Sunday afternoon (Aug. 25th), Tagliani made his fifth start in the NASCAR Gander Outdoors Trucks Series, all coming at Canadian Tire Motorsport Park.

He has been a competitor in the Chevrolet Silverado 250 five of the seven races held at Mosport, but Tagliani had the race of his career this year. His previous best finish came in the 2015 edition with Brad Keselowski Racing was bested Sunday as he brought the No. 51 home in second, only behind a dominating performance from Brett Moffitt.

“First of all, it was amazing to run for KBM,” Tagliani told FOX Sports. “Thanks to everyone there especially Kyle (Busch) for accepting for me to be in this truck. Thank you to Spectra Premium, CanTORQUE, RONA, we were just missing loading the front tire during the race in the fast corner so I had to overslow the truck too much in the corner and that is what made the difference in the 24. Nevertheless, it was a pleasure to race for them and it was a good point day for the No. 51.”

After the race on Sunday, Tagliani ran his 319th lap around the Canadian Tire Motorsport Park. The NASCAR Pinty’s Series veteran used his experience to land his best career NGOTS finish. FOX’s Alan Cavanna asked him about how the trucks are at Canadian Tire Motorsport Park. In a time where new tracks are being discussed for either the NASCAR Xfinity or Monster Energy NASCAR Cup Series, Sunday’s race was an important showing for possible additions to what has become a tradition North of the U.S. border.

“It’s good, the trucks are good,” Tagliani added. “This year we came with a different tire and we maybe needed to make some changes but as soon as your not in the window you can see that the competition is high. It’s not a very technical road course but at the same time, it makes for good racing, its tough and if you’re just a little bit off you can’t make it up.”

The No. 51 truck is battling in the NASCAR Gander Outdoors Truck Series Owners Championship playoff. The ARCA Menards Series points leader Christian Eckes returns to the No. 51 in three weeks at the Las Vegas Motor Speedway as the owners’ championship playoff goes from eight to six.

Meanwhile, Tagliani sits fourth in the NASCAR Pinty’s Series point standings, 27-points behind leader Andrew Ranger. There are three races remaining in the season, as the series returns Sept. 7 at Autodrome St-Eustache.

Unlike JV, Alex does not use up his equipment or crash his way to the front, excellent drive