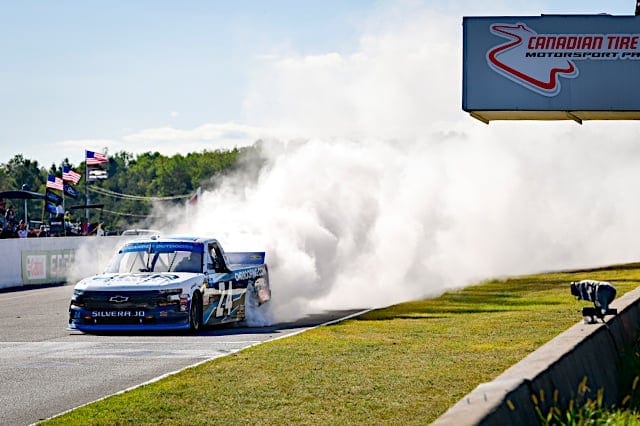 As the defending NASCAR Gander Outdoors Truck Series champion, Moffitt has well-positioned himself in the Round of 6. His four victories and four stage wins give him 34 playoff points, more than any other driver. Moffitt described the feeling of back-to-back wins as great.

“I’d say we’re hitting our stride at the right time,” Moffitt stated. “It took awhile to get here but before it was like we were missing a little bit everywhere. Now we’re hitting on all cylinders and it’s great. We got a new partner here, CMR [Construction and Roofing]. I’m pumped to have them and bring them to victory lane.”

Moffitt had a fast No. 24 GMS Racing Chevrolet the whole race weekend at Mosport. He led the final practice session and then  won the pole.

Moffitt continued his dominance by leading all the laps in the first stage en route to the playoff point. While in second place, Todd Gilliland spun, receiving damage to his No. 4 Toyota. He pitted and managed to stay on the lead lap, just ahead of Moffitt as they ended the first stage. A number of drivers spun, but because the track is so wide, the drivers gathered up their trucks, and the first stage was caution free.

In the second stage, a spin and subsequent wreck by Dan Corcoran on lap 31 led to a caution which led to varying pit strategies. While many drivers pitted, Ross Chastain stayed out. Chastain took advantage of his track position to win his fifth stage this season.

After the pit stops at the end of the second stage, Moffitt regained the lead. On the restart, he jumped ahead of Alex Tagliani and never looked back. There were no dramatics on the last lap of the Chevrolet Silverado 250. Moffitt won by a margin of 5.160-seconds ahead of Tagliani.

Ben Rhodes finished third followed by Sheldon Creed in fourth place. Austin Hill finished fifth, the second highest playoff driver, but all the playoff drivers showed their strength on the only road course on the Truck Series schedule.

Moffitt won the first stage, but the remaining playoff drivers finished in second through eighth place. As the laps in the first stage wound down, ThorSport Racing drivers Johnny Sauter and Grant Enfinger made contact.

Luckily, Enfinger kept his No. 98 Ford from making contact with the wall, and he and Sauter raced inside the top 10 for the rest of the race.

Behind Hill in sixth place at the checkered flag was Sauter. Friesen finished seventh, Chastain was eighth, while Tyler Ankrum and Matt Crafton rounded out the top 10. Enfinger wound up 13th.

As a result, as my colleague Michael Finley noted in the Frontstretch Slack channel, “That playoff race is insane.”

Moffitt doesn’t have to worry about that. His 11th career win had him smiling in victory lane, glad to celebrate winning the Chevrolet Silverado 250. He appears to have hit his stride this season at the right time.

“As far as the team goes, everyone at GMS [Racing], everyone from the fab shop on up has been doing a better job,” Moffitt added. “Our team personally here, Jerry [Baxter] and I have been communicating a lot better. Knowing what might work and what I need to find in the truck.”

Dating back to the last two races of 2018, Moffitt has won the past four playoff races in the Truck Series.