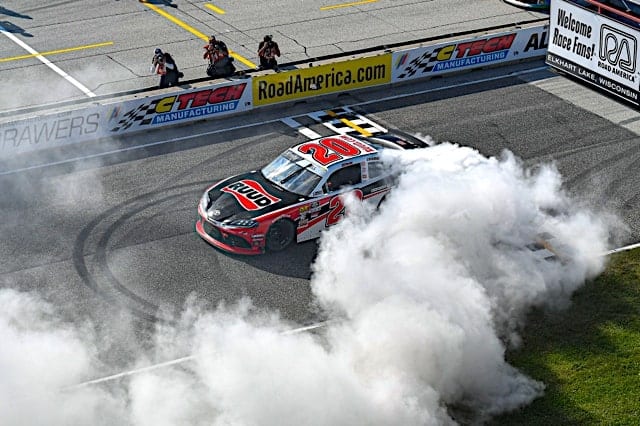 Xfinity Series: Christopher Bell Gets it Done on a Road Course

Throughout Christopher Bell‘s young NASCAR career, he’s mentioned how he believes one of his weaknesses is road course racing. After Saturday’s (Aug. 24) CTECH Manufacturing 180, he can’t say that anymore.

During the two practice sessions on Friday (Aug. 23), Bell was the car to beat, though no team made a long run. But in qualifying, the No. 20 car locked up its tires and turned the 12th quickest lap. He didn’t gain much ground throughout stage one either.

But Bell’s race changed when a caution flew with 12 laps to go for debris flying off Brandon Jones’ car. What was a positive for the No. 20 car was a negative for his Joe Gibbs Racing teammate Matt DiBenedetto, who was making a one-off Xfinity start, as the No. 18 car had yet to pit.

Following a bad pit stop, DiBenedetto restarted outside the top 10 and charged to second on the final lap. However, he wrecked on the final turn, attempting to hold off a hard-charging Austin Cindric, who restarted 20th with two laps to go after electing to pit for fresh tires during a late caution.

Cindric took the checkered flag in second, the third time in three races he and Bell finished 1-2 at road courses this season (at Watkins Glen and Mid-Ohio, it was Cindric who won). Tyler Reddick, Noah Gragson and Kaz Grala rounded out the top five.

It was the day of the underdog of sorts back in the pack, with Jeremy Clements finishing eighth, which is the first time he’s had consecutive top-10 finishes in his Xfinity career (322 starts). And by the way, Nicolas Hammann gave Mike Harmon Racing its first-ever top 15.

Getting back to Bell, he’s proved himself to be quite good on all types of tracks. All he’s got to do now is win at a superspeedway. – Dustin Albino

Less than three weeks after bringing Hattori Racing Enterprises its first championship, Brett Moffitt was released from the No. 16 Toyota in favor of putting Austin Hill behind the wheel. Though Hill had shown marked improvement throughout the 2018 season in his Young’s Motorsports ride, it came as a shock to much of the NASCAR world.

But as we all know, Moffitt landed at GMS Racing to pilot the No. 24 Chevrolet, and while it took a disqualification of Ross Chastain’s truck at Iowa Speedway to give him his first win, the defending champion now has four wins. That includes going two-for-two in the playoffs so far. He took the victory at Bristol Motor Speedway to notch his spot in the Round of 6 and followed that up with a dominant run and a win from the pole at Canadian Tire Motorsports Park.

Moffitt now has 34 playoff points he gets to carry with him throughout the remainder of the championship battle, which all-but guarantees his slot in the Championship 4. It’s not time to hand the trophy over to him just yet, but you can bet if anyone else expects to be able to win the title, they’re going to have to go through Moffitt and the No. 24 team to do it. – Beth Lunkenheimer

It was a rough week for Takuma Sato, but it culminated in a satisfying victory under the lights at World Wide Technology Raceway at Gateway on Saturday.

In a thrilling finish, the 2017 Indianapolis 500 champion held off Ed Carpenter at the line to collect his second win of the season. The victory also served to quiet a chorus of critics that had called for his suspension following a five-car pileup at Pocono Raceway last weekend.

While he got to the front with a well-timed yellow, Sato was dead last in the running order in the early stages of the race, working his way back to the head of the field with a combination of speed and strategy.

He was joined on the podium by Carpenter, who was just four-thousandths of a second away from stealing his fourth career win, and Tony Kanaan, who scored his first podium since moving over to A.J. Foyt Racing.

While it was a memorable end to the night for the ageless wonders on the podium—their average age is over 41—it was one to forget for most of the championship contenders.

Scott Dixon was sent back to the garage just 60 laps into the race with a punctured radiator, ending his night early, while Alexander Rossi was forced to pit for fuel under green with just 20 laps to go, putting him a lap down and all the way back in 13th place.

Josef Newgarden, however, was on his way to another top-five finish after starting on the pole but spun coming to the checkers trying to avoid a slow Santino Ferrucci. While he didn’t make contact with anything, he rolled across the line in seventh, behind Simon Pagenaud, who overtook Rossi for second place in the championship race. Newgarden now holds just a 38-point advantage over his teammate as the NTT IndyCar Series heads to Portland International Raceway for the penultimate round of the year. – A.J. Hecht

Sports Cars: Robinson Racing To Compete Full-Time In IMSA In 2020

Last week, Riley Motorsports announced it’s joining forces with Robinson Racing to field a full-time Mercedes AMG-GT3 in the GT Daytona class in 2020.  The drivers will be Gar Robinson and Lawson Aschenbach.  These two drivers are currently competing in a WeatherTech Sprint Cup effort that is a joint venture between Robinson Racing and Lone Star Racing.  The car currently being raced is Lone Star Racing’s car that competed in what is now Blancpain GT World Challenge America last year.

The Robinson Racing will replace Ben Keating’s Keating Motorsports effort as Riley Motorsports’ GT Daytona operation.  Keating, who claimed his first victory of 2019 Sunday at VIR along with co-driver Jeroen Bleekemolen, will not be back full-time in IMSA next season.  Both Keating and Bleekemolen will race full-time in the FIA World Endurance Championship’s GTE-Am class starting next weekend at Silverstone (they will still finish out the 2019 season).

Robinson has limited experience in IMSA with only six career starts in the GT Daytona class.  He has a podium finish in the Rolex 24 at Daytona with Riley Motorsports in 2016 in his series debut.  Outside of IMSA, he’s best known for racing in Trans-Am, where he is a past champion in the TA2 class.  He also races in Pirelli GT4 America Sprint in a Mercedes-AMG GT4.  Through nine races, Robinson is currently fourth in points with four podium finishes.  His best runs are a pair of second-place finishes (St. Petersburg race No. 1 and VIR race No. 2).

Aschenbach is a veteran of a decade and a half of major sports car racing in North America.  He is a multi-time champion in the former Pirelli World Challenge, winning titles in the GT and GTS classes, in addition to the former Grand-Am Continental Tire SportsCar Challenge’s Street Tuner class.  In 66 starts in North American endurance racing, he has three class victories, two of which came at Canadian Tire Motorsports Park. – Phil Allaway

Takuma started this race like he had a target on his helmet. Any wrong move and he was going to the penalty box. So he raced his way from fifth to twenty-second trying not to offend anybody. With some timely luck and clean air anyone can win. Not that it is that easy win. You still have to drive all out with no mistakes.

Jeremy
Reply to  Tom B

What happened reminded me of a line from (I think it was Harry Gant) in the movie Stroker Ace where he found himself between Audrey (Aubrey!) James and Stroker Ace… “Oh hell, here we go again!”

Sato was in the middle of 3 wide and almost crashed with Hunter Reay – I think Rossi would also have been involved again if the crash had materialized. Sato, after last week, wisely backed out at the last second and saved a nearly out of control car – which sent him straight to the back. As a result, he lived to realize the fortune of a well-timed caution and took the win.