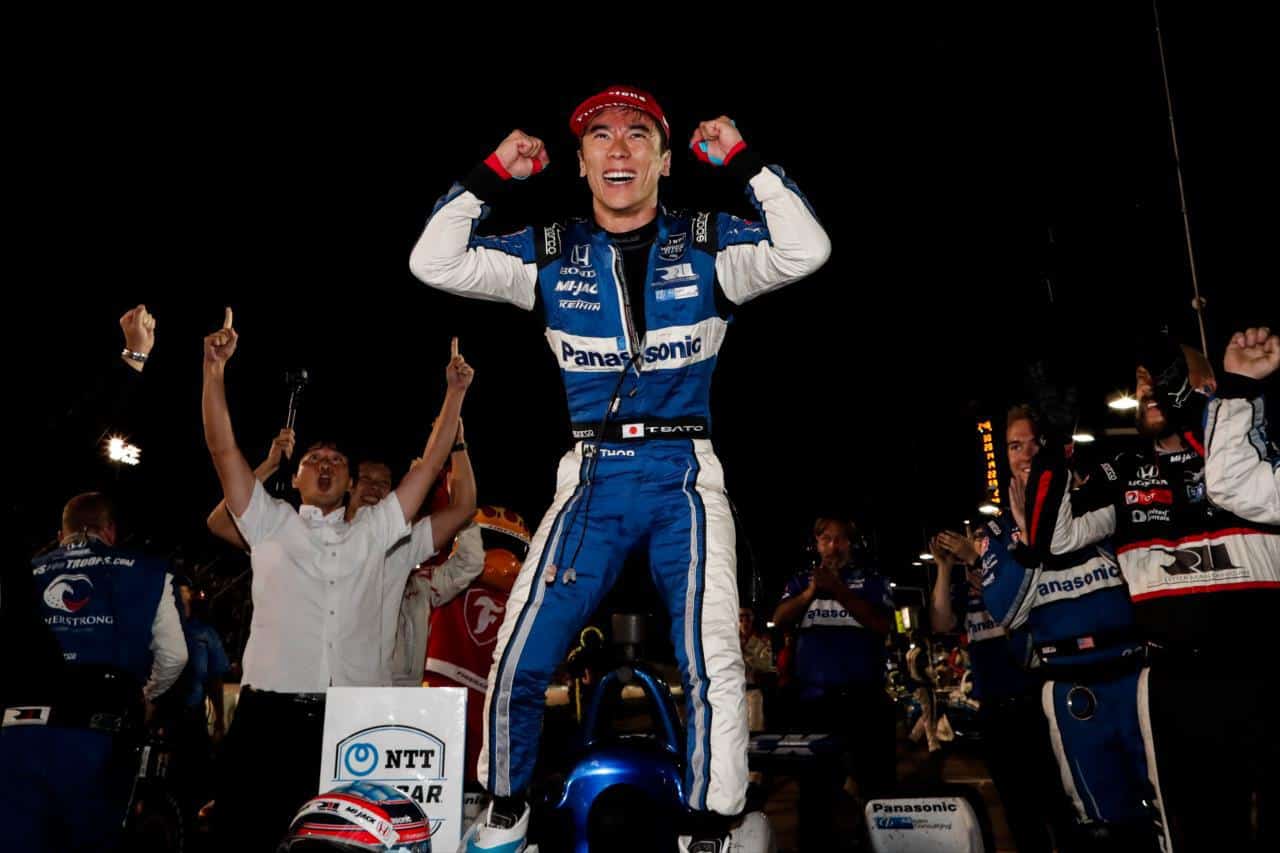 In a race that had everything; a photo finish, a surprise winner, and championship drama, Takuma Sato came away with the victory, redeeming himself from last week’s controversy created by his first lap wreck at Pocono Raceway.

Finding himself at the head of the field because of a timely yellow with just 50 laps to go, Sato held off a hard-charging Ed Carpenter at the line by just four-thousandths of a second to claim his second win of the season.

But the drama wasn’t limited to the fight for the win.

A last lap incident between Josef Newgarden and Santino Ferrucci dropped the championship leader from fifth to seventh, bringing Simon Pagenaud into the thick of the title fight.

"What he did was, in my opinion, dangerous." @JosefNewgarden was not happy with @SantinoFerrucci's late move at @WWTRaceway ?#Bommarito500 // #INDYCAR pic.twitter.com/9i6twIXbSy

Ferrucci, who got up into the marbles in the final corner, cut down into the racing line directly in front of a hard-braking Newgarden. The move sent the No. 2 spinning, allowing Pagenaud and Conor Daly, who had another impressive performance for Carlin Racing, to get by, while Newgarden limped across the line struggling to get the car re-fired.

Luckily for Newgarden, Alexander Rossi was unable to take advantage of the incident. Ending the race one lap down, badly timed yellows and missteps in strategy took him out of contention for the win

But it was still a missed opportunity for Newgarden, who could have taken firm command of the championship race with just two rounds remaining in the NTT IndyCar Series schedule.

Starting on the pole, Newgarden got away to a quick start, jumping out ahead of Sebastian Bourdais at the green flag, while championship rivals Rossi and Scott Dixon gained a few spots on the start before a Marcus Ericsson spin in turns 3 and 4 brought out the first caution of the day.

Will Power, making the high line work through turns 1 and 2, jumped into second on the restart, while Ferrucci got the better of his veteran teammate to jump into third.

The Aussie then set his sights on his teammate, closing the gap to just two-tenths of a second before the championship leader stretched out a one second lead.

While the leaders settled in for the long haul, there was plenty of action back in the pack.

Daly, who led final practice on Friday evening, quickly moved up to 14th from his 18th starting position in his fourth appearance in the No. 59 Carlin Chevrolet.

Sato, meanwhile, dropped like a rock. After starting fifth and bumping wheels with Ryan Hunter-Reay on the first lap, the Rahal Letterman Lanigan Racing driver quickly found himself dead last by lap 50.

Aiming to fix his ailing car, the 2017 Indianapolis 500 champ ducked into pit lane, and was soon followed by most of the field, including the leader and his teammates.

On lap 52, Power, trying to race Newgarden out of pit lane, missed the turn in heading into turns 3 and 4, ending up in the wall. With the car rolling to a stop on the frontstretch, the damage was enough to put an early end to his night.

The caution was a big break for James Hinchcliffe, who had just ducked into pit lane as the yellow came out, putting the Canadian at the head of the field. Ferrucci was also able to jump Newgarden in the order following the pit stop.

While the yellow flag laps ticked by, disaster struck for Dixon as a mechanical issue sent him back to the paddock. Ultimately diagnosed as a punctured radiator, the damage put the five-time champion over 100 laps down, ending his night and potentially his championship bid.

Once the race got back to green, the fireworks started to fly. At the front of the field, Bourdais got the better of Newgarden heading into turn 1, putting both of the Dale Coyne Racing teammates in podium position.

Further back, Rossi, Daly and Pagenaud mixed it up for the first few laps of the second stint, finally settling in after a few laps.

But back up front, the Indianapolis 500 Rookie of the Year tried to track down Hinchcliffe for the race lead, finally passing Hinchcliffe on lap 83 with a bold dive to the inside in turn 3. With the clean air, Ferrucci began to pull away from the field, putting as much as a seven-second gap on second place Hinchcliffe.

On lap 111, Newgarden made his second stop of the night, followed soon after by Hinchcliffe and Pagenaud while the DCR pair stayed on track for another five laps. Although fresh tires were at a premium, both were able to hold their position on track, cycling back into first and second once the rest of the field had made their second stops.

While there was plenty of action on pit lane, it was almost disaster for the championship leader on the track.

That could have been HUGE for the @IndyCar championship battle.

Chasing down Hinchcliffe after their pit stops, Newgarden dove inside the No. 5 heading into turn 3, overcooking the corner and nearly reenacting his teammate’s incident just 60 laps earlier. Fortunately, the pole-sitter was able to keep his car off the wall, though losing a position to Sato, just one spot ahead of championship rival Rossi.

Shortly after, Ericsson brought out the third –his second– yellow of the day after brushing the troublesome turn 4 wall.

Dixon, now 60-plus laps down, finally rolled back on track after replacing a punctured radiator during the caution period.

On the restart, Rossi was able to jump the Team Penske driver, moving into fourth. But the tight racing was short lived, as Spencer Pigot quickly brought out another yellow after making contact with Charlie Kimball in–yet again–turn 3.

After a lengthy delay, everyone picked up where they left off, with Rossi grabbing third away from Hinchcliffe. Newgarden was then able to dispatch the Arrow Schmidt Peterson driver, putting Rossi directly in the championship leader’s sights.

Behind them, Daly continued to look sharp, holding off Felix Rosenqvist, Colton Herta and Pagenaud to hang onto sixth place at the green flag.

Up front, Ferrucci wasn’t able to pull away from his teammate, leading a train of cars for the remainder of the stint, with his veteran teammate quietly hanging behind his protégé.

On lap 175, Rossi dove into pit lane, followed by Newgarden one lap later. Coming out of pit lane, the Andretti Autosport got caught up behind a number of lapped cars, as well as Hinchcliffe, giving the advantage back to Newgarden.

With Newgarden, Hinchcliffe and Rossi out of the way, Daly, looking like the class of the field, cutting the lead to under a second before making another pit stop on lap 186.

Two laps later, the leaders came in for fresh tires and fuel, but a slow stop for Ferrucci dropped him a few spots in the order.

Just a painful series of events for @DaleCoyneRacing.

First: A slow stop for @SantinoFerrucci
Then: @BourdaisOnTrack gets into the wall #Bommarito500 // #INDYCAR pic.twitter.com/uTd98vXzxy

Later that lap, turns 3 and 4 claimed another victim in four-time series champion Bourdais, who got up into the marbles and found the outside retaining wall.

The yellow was well timed for Newgarden, who had lapped everyone but a few back markers, including Rossi, when the yellow came out. With a lap in hand, the championship leader opted to stop for fresh tires, enabling him to go to the end without another stop, cycling out in fourth, still ahead of Rossi.

With under 50 laps remaining, Sato, once finding himself in last place in the early stages of the race, lead the field back to green, followed by Tony Kanaan, Carpenter and Newgarden.

Up front, things stayed stagnant, while Ferrucci moved back into the top five after getting by Rossi. The Rookie of the Year candidate then reeled in Newgarden, who was stuck behind his former boss. Although he initially closed the gap, Ferrucci struggled to get by the 2017 series champion, still hampered by the No. 20 in front of him.

With just 20 laps left, Rossi, unable to make it to the end of the race, had to stop for fuel, dropping him back to 14th in the order. He’d end the night in 13th.

Newgarden, content to cruise home to a top five finish, didn’t put up much of a fight against Ferrucci, who was hungry for a podium.

Meanwhile, Sato continued to put laps away, looking like he’d walk away with a comfortable win until Carpenter tracked him down in the last five laps.

Although he wasn’t able to snatch the win away from Sato at the line, Carpenter ended the night with his first podium of the year — in his last race of the season — and his best finish since the 2018 Indianapolis 500.

"I've heard it all by now." Here's @TonyKanaan after his first podium since 2017 at @TXMotorSpeedway ?#Bommarito500 // #INDYCAR pic.twitter.com/bl1LrKyUEG

Kanaan was also able to take advantage of his jump to the front of the field, collecting his first podium with A.J. Foyt Racing.

Ferrucci, after his dangerous block on Newgarden, still managed to tie his career-best finish with a fourth-place result, though the rookie led 97 laps over the course of the night.

Pagenaud, sweeping in to take advantage of his teammate’s misfortunes, beat out Daly for a top five finish. Newgarden, who rolled across the line without power, barely nicked eighth-place finisher Hunter-Reay to end his night in seventh. Behind them, Herta snagged his sixth top 10 of the year, while Marco Andretti quietly grabbed his fifth.

But even after all that drama, the points standings remained largely the same, albeit with two names swapped in the order.

Heading into next weekend’s race at Portland International Raceway, Newgarden holds a 38-point advantage over now second place Pagenaud. Rossi, because of his 13th-place finish, dropped back to third in the standings and sits 46 points back. Dixon, who hadn’t finished worse than second since the series visited Road America, ended his night back in 20th, and is now 70 points in the hole.

There is a saying “Old age and treachery will overcome youth and skill”. The race at Gateway proved there is still some validity to that claim. lol

Undoubtably, these past years are some of the closest INDY CAR racing in years. Who would of ever thought Dale Coyne Racing would be running 1-2 towards the end of the race. Yes, one is a multi Champion, the other a rookie. It is fun to watch, but what do you expect when they are racing with the same cars, same engines, same tires.
With a little luck and clean air anybody can win. There is something missing, good old American ingenuity. IMO