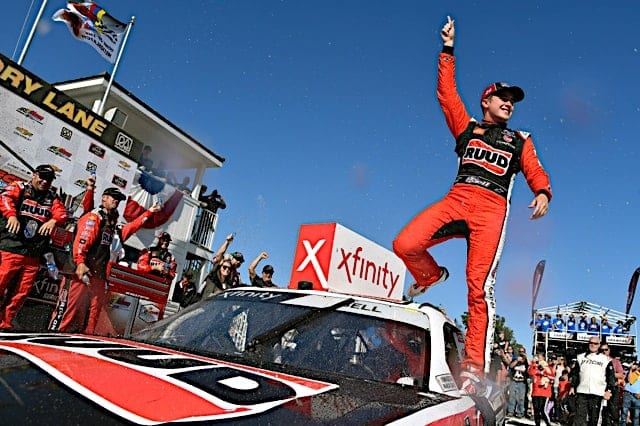 There’s probably not really such a thing as a Christopher Bell naysayer. He’s clearly ready for Monster Energy Cup Series racing in 2020 — and an excellent argument could be made that he could have successfully made the jump this year — as he’s accomplished everything he possibly could at the NASCAR Xfinity Series level except for winning a championship.

Prior to this weekend at Road America, there was something else he hadn’t done: Win on a road course. Bell, himself, has even referred to road course racing as a weakness, but that’s relative. This is the same guy who often seems crestfallen when he finishes second, which is exactly what he did at both Watkins Glen International and Mid-Ohio Sports Car Course (to Austin Cindric in both events). A weakness to Bell could easily be a career day for many of us.

It doesn’t matter any more, because Bell checked the road course box off the list in the CTECH Manufacturing 180. Quick all day, he earned his victory by flexing the muscle of his No. 20 Joe Gibbs Racing Toyota with 10 laps to go, finally getting the best of Cindric. He couldn’t breathe easy the rest of the way, because AJ Allmendinger, a driver who is right at home on tracks with left and right turns, was close enough to pounce on any mistake for a while.

There was a late restart to survive as well, necessitated when Gray Gaulding found his way into the sand with four laps left. Of course, Bell is an ace at those, so that was no problem.

With six wins and a growing lead over Cole Custer and Tyler Reddick in playoff points, Bell might just snag the Xfinity crown before he departs the series too. So are there any hurdles still left for him to clear?

“Speedway racing is a struggle for me,” Bell said in victory lane.

Sure, man. Whatever you say.

There are good pit calls, and then there’s what Cindric’s team decided to do during the race’s final caution. Already out of sync with most of the other teams, Cindric came into the pits for his last set of tires and the knowledge that there was going to be a green-white-checkered finish. Only a couple other cars came with him, so he restarted 20th.

The thing is, two laps at Road America is nearly 16 at Bristol, so Cindric had time to come through the field. His runner-up finish (helped by a mishap to another car, which we’ll get to shortly) meant he completed the Xfinity summer road course swing with two wins and a second, and it’s hard to do better than that.

Several other playoff drivers persevered through various trials and tribulations to salvage good results of their own. Justin Allgaier is still being dogged by his own personal dark cloud, but he survived an off-road jaunt and blown tire in stage one to come home ninth.

Right behind him was Custer, who was on pit road in the second stage with his hood up and radiator issues. That left him a lap down, so to claw his way back for a top 10 was nice work.

Matt DiBenedetto, who’s become even more of a folk hero to racing fans as of late, looked like he was going to have himself a day at Road America. He led his first ever Xfinity Series laps in stage two, and while he wasn’t going to win unless Bell messed something up, he was in prime position for a runner-up finish.

As the NBCSN cameras focused on Bell headed up the final hill to the checkered flag, something happened to DiBenedetto to send him into the sand on the final turn.

Did Cindric send him off-course? Or did DiBenedetto just lose control at the worst possible time? Fans watching the race broadcast never got to see for themselves. It wasn’t even immediately apparent who was off the track, with Dale Jarrett saying only, “I think that might be the 18.”

It turns out Cindric (who also got called Austin Dillon during his post-race interview) didn’t hit DiBenedetto, who admitted that he simply made a big mistake. But not being able to see a dramatic moment for one of the most talked about drivers in the sport right now was definitely a bad look for NBCSN.

No one likely expected that much out of Dick Karth behind the wheel of the Motorsports Business Management Toyota. We’re talking about a driver so obscure that he doesn’t even have his own Wikipedia page. At age 66, Karth was making his first ever Xfinity Series start at Road America, a bit of a surprise since he only had three ARCA events under his belt before Saturday.

As you might expect, it didn’t go well. Karth was reportedly 20 seconds off the pace being set by Allmendinger in the opening laps — though maybe that shouldn’t have been a shock since he was nearly that much slower during qualifying.

Dick Karth, making his @XfinityRacing debut at 66-years old, was 18 seconds off the pace in opening round of qualifying. #NASCAR

Karth was replaced by Timmy Hill, quite possibly because he was just hopelessly slow. It’s cool to see someone live out their dream, and it was admirable that team didn’t just start and park, but there’s a serious question about whether someone that far off the pace should be out there.

Jeremy Clements knows all about Road America. His lone Xfinity win to date came at that very track two years ago, and he was a factor again this time out. His eighth-place finish came on the heels of his fourth-place run at Bristol, giving him his first ever consecutive top 10s.

Kaz Grala wasn’t running for a self-owned team like Clements, and Richard Childress Racing doesn’t qualify as an underdog team. But Grala himself is battling the odds at the moment, and he made the most out of his final scheduled event of 2019. Grala even gave Bell a run for his money at various times, and his well-deserved fifth place could help him find his way back to the series before the season ends.

It was a bummer of an ending to DiBenedetto’s story. Interviewed toward the very end of the race broadcast, he turned into his own toughest critic.

“Just being stupid on my part,” DiBenedetto said. “I was looking in my mirror, and got too high, and just barely got up in the marbles, and made the most rookie mistake of my life. It was dumb, uncalled for.”

That’s rough, no doubt about it.

“I guess I just get lucky on these things, that’s for sure.” – Christopher Bell

“I passed a lot of cars that just ended up overdriving corners and missing corners. It was chaos, it was insane.” – Austin Cindric

“The Cup Series is going to be in trouble when [Bell] gets there, because he’s going to be pretty awesome at it.” – AJ Allmendinger

“A top five goes a long way for me, especially as a part-timer out here. Really proud of everyone at RCR; it’s been a fun season with them so far, and maybe I’ll get something else together for this year. I’m hoping so.” – Kaz Grala

Not all road course races are created equal, and the problem with the CTECH Manufacturing 180 was that the restarts were exciting but there were long stretches that weren’t. The final 10 laps saved the day, though the confusion about the cars behind Bell marred the finish. We’ll call it a wash overall, with the stories turning out more interesting than much of the on-track action.

With the road course swing in the rear view mirror, the next tune we hear will be a tango with The Lady in Black. Darlington Raceway kicks off the final three-race regular season stretch run, giving drivers outside the top 12 a few more opportunities to shake up the playoff picture.

Whether they’ll actually be able to do so is a legit question. The Sport Clips Haircuts VFW 200 has been won by Cup Series drivers three of the last four years, meaning the entry list will be of special interest when it arrives. Coverage of the race starts at 4 p.m. ET on Saturday, Aug. 31.

Bell is now in a tough spot. While fortunate and a dream position to be in for any racer, the expectations are going to be super high next year. Media (and unrealistic fans) have hyped him up so much, pretty much anything less than immediately winning in Cup next year will be seen as a failure (much like Chase Elliott). All signs point to him being one of the elite in the future, time will tell if that materializes or not.