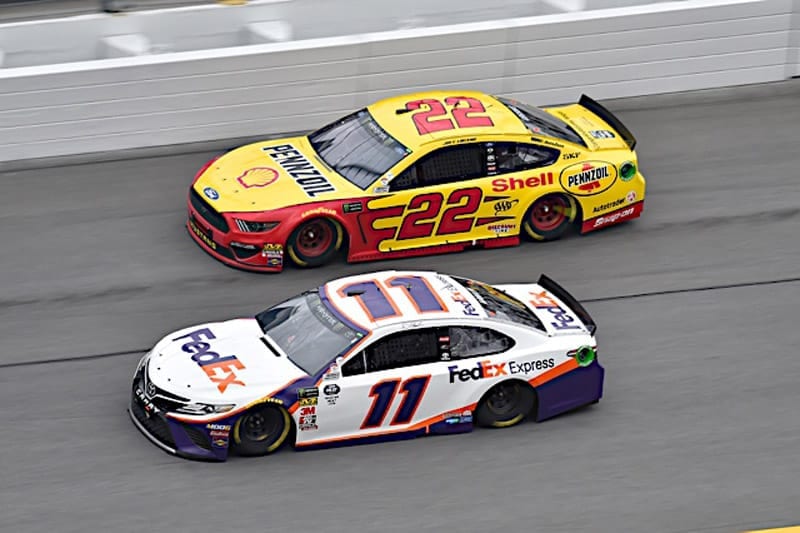 ONE: Joe Gibbs, Roger Penske or “Other”

In 2018, the Monster Energy NASCAR Cup Series had the Big Three. But two-thirds of the way into 2019, it’s more like the Big Two.

Joe Gibbs Racing and Team Penske have taken turns beating up on the competition this season. Right now, JGR has the upper hand, winning 50% of the races overall (12 of 24) along with two of the last four. Kyle Busch, Denny Hamlin and Martin Truex Jr. are tied for the series lead with four wins apiece; they’re 1-2-3 in playoff points and 1-3-4 in the season standings.

Those five drivers could easily battle for the four spots among themselves. We saw last season the three dominant drivers qualify for Homestead-Miami Speedway without breaking much of a sweat. And that’s when the trio seemed off their game for much of the playoff. There’s not as much of a cushion here, but when you win 17 of 24 … challengers are hard to come by.

The question is whether recent surges by Chase Elliott (Hendrick Motorsports) and Kevin Harvick (Stewart-Haas Racing) could put them on par with this quintet. Or if someone else (Kurt Busch?) could break out of the pack. Harvick, based on his experience and the 2014 championship under this system, has the best chance out of this trio.

But at this point, it appears more likely that the JGR/Penske stragglers, Erik Jones and Ryan Blaney, have just as good a shot at a Cinderella run. Jones, in particular, is one to watch with four top-five finishes in the last six races. If that extension at JGR gets signed, securing his future, there’s little to lose in what appeared to be a lost season just two months ago.

It’s all part of continued consolidation as NASCAR brings as much of its tracks, operations and staff together under one roof. The $2 billion deal with ISC should close at the end of the year and put the sanctioning body fully in charge of half its race dates.

The question is, what comes next? Will Speedway Motorsports, Inc. and their tracks making up a dozen Cup Series dates on the calendar merge with NASCAR? SMI is currently in the process of going private with ownership retained by Bruton Smith and son Marcus’ company, Sonic Financial. Striking a deal makes sense considering a completely renovated schedule. It may be more difficult for SMI to fight back if NASCAR President Steve Phelps consolidates the schedule or chooses to eliminate track dates altogether; you’d think non-NASCAR owned tracks would be at a disadvantage there. The sport’s Gen-7 model also looms on the horizon come 2021, and they’ll want as many ducks in a row as possible to ensure a clean rollout.

There’s also the issue of the sport’s new sponsorship model with Monster Energy in the final year of its deal. How will the Cup Series be renamed and how will income and profits filter down in the new structure? It’s all off-track news that may be boring to some but holds the key to the sport’s medium and long-term viability.

David Ragan has already announced his full-time Cup Series retirement for 2020. At just 33 years old, he’s a reminder any Cup driver losing his passion for the sport could hang up his helmet at any age.

But there’s two 40-somethings in particular the sport will be keeping an eye on. Kurt Busch, racing on a one-year deal with Chip Ganassi Racing, has not said he’ll return in 2020. The initial assumption was Busch would retire at age 41, but a better-than-expected season has him reconsidering. How he fares in the postseason could tip the scales either way, potentially opening up a playoff-caliber ride late in the Silly Season process.

Of course, whether or not Jimmie Johnson makes the postseason could influence his future NASCAR plans. Johnson and sponsor Ally Financial are signed through 2020 at Hendrick Motorsports. After that? The 43-year-old Johnson has made no promises as his on-track performance has deteriorated rapidly. The seven-time series champion is mired in a two-plus year winless streak, starting just six months after he won the 2016 title.

Now, a series of bad luck, wrecks and a crew chief change less than one year into Chad Knaus’ replacement leaves Johnson 26 points out of the playoff hunt with two races remaining in the regular season. Can he continue a 15-year streak of making the postseason field? And if not … does that give him more or less incentive to call it quits? You never know; legends like Darrell Waltrip and Richard Petty kept racing years after their prime. But you have to think Johnson is thinking more along the lines of Jeff Gordon and Tony Stewart, drivers who ended their careers around age 45.

The sponsorship woes that for years wiped out NASCAR’s middle and lower class have worked their way up the ladder. Hendrick Motorsports is seeking primary sponsorship after Nationwide Insurance backed out of backing Alex Bowman in 2020. There could be concerns for Chip Ganassi and the No. 1 if Kurt Busch retires and Monster chooses not to realign itself with a new driver.

Further down the line, financial woes have kept Bubba Wallace and Richard Petty Motorsports near the back of the pack. Richard Childress Racing may need to let go of Daniel Hemric rather than expand back to three cars with their Xfinity Series phenom, Tyler Reddick. Those two are the ones I’m watching to see if money forces them to scale back.

Through it all, there are no new owners apparently on the horizon for 2020. At least, not yet; that lack of new blood is keeping franchise values down in a seller’s market. Who needs one of 36 medallions, a charter guaranteeing a starting spot in all 36 races, when the Cup Series never fills its field of 40 cars each week? No wonder Furniture Row Racing’s charter went for only $6 million to Spire Motorsports.

The best hope for new ownership comes in the form of new manufacturers. You’d think no one joins, though, until the new Gen-7 car in 2021, which could hamper efforts to grow the sport through a younger group of investors. Already, the Xfinity Series field has been reduced to 36 cars for 2020 with expectations the lineup could shrink yet again.

If Erik Jones, indeed, signs that extension, Silly Season for Cup could find itself rather tame this year. Ragan’s slot at Front Row Motorsports is available; Leavine Family Racing has an opening after releasing Matt DiBenedetto. That spot is almost guaranteed to go to Christopher Bell unless JGR looks to move Jones and give Bell their No. 20.

Most other top-tier rides appear spoken for — for now. Clint Bowyer’s contract is up at Stewart-Haas Racing and he could miss the postseason. That could mean it’s time for Xfinity star Cole Custer to slot in. Custer’s also been rumored to head to the No. 32 at Go FAS Racing, a move that would sink Corey Lajoie. Daniel Suarez comes with sponsorship and a strong 2019 means he’ll likely return at SHR, though both he and the team have an option.

The Reddick-Hemric situation could heat things up at RCR if money doesn’t materialize. After that? Dominoes hinge on the potential Busch retirement. But even then, that ride may already be spoken for as Ross Chastain was being groomed at CGR before an offseason sponsorship fiasco.

Thus far, it’s a below-average Silly Season of movement. But remember last summer? It looked dead to the point I thought no one would move, and then … Furniture Row Racing announced they were closing up shop. All hell broke loose. So you just never know. But this year, like this year’s Atlantic hurricane season, conditions are currently unfavorable for more development.