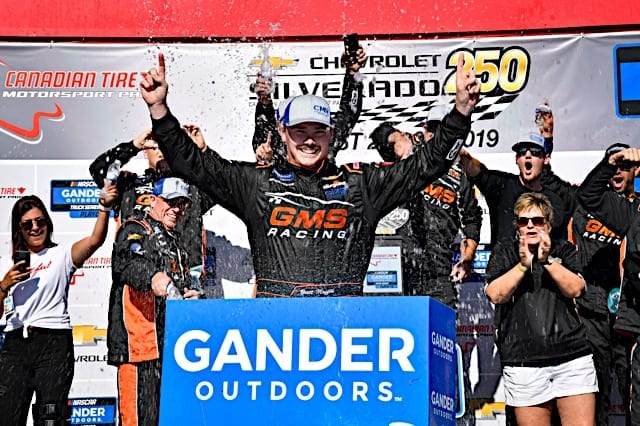 In a Nutshell: Brett Moffitt dominated the Chevrolet Silverado 250 at Canadian Tire Motorsports Park Sunday afternoon (Aug. 25) to score his second straight win and fourth of the 2019 season. He led a race-high 44 of 64 laps en route to a more than five-second victory over Alex Tagliani.

You're going to need a bit more room there @Brett_Moffitt! pic.twitter.com/fVzU4vA0IY

Ben Rhodes scored his first top five since Iowa Speedway in June with a third-place finish. Sheldon Creed and Austin Hill rounded out the top five.

Four of the remaining five positions inside the top 10 went to playoff drivers, starting with Johnny Sauter, who posted his best finish since his win at Dover International Speedway in May, in sixth. Stewart Friesen, who started at the back of the field in a backup truck after a practice crash on Saturday was seventh, followed by Ross Chastain. Tyler Ankrum and Raphael Lessard rounded out the top 10.

After starting on the pole, Moffitt led every lap in stage one and won that by more than 15 seconds. He gave up the top spot only through varying pit road strategies, allowing Ross Chastain to win stage two. Moffitt cycled back around as the race leader at the beginning of stage three and drove away from the field once again.

And just when it looked like a blown motor for Harrison Burton with two laps remaining might tighten up the field, NASCAR officials didn’t see any fluid on the track and allowed the race to run to completion under green in what was an uncommonly calm finish, compared to recent history at the track.

Alex Tagliani is no stranger to the Truck Series at Canadian Tire Motorsports Park. In fact, he’s run the last five straight races at the road course. But this time, he was behind the wheel of the No. 51 Kyle Busch Motorsports Toyota, and he ended up walking away with a career-best finish of second.

“First of all, it was amazing to run for KBM (Kyle Busch Motorsports),” Tagliani said after the race. “Thanks to everybody there, especially Kyle (Busch) for accepting for me to be in this truck. Thanks to Spectra Premium, CanTORQUE, Rona.

“We were just missing loading the front during the race in the fast corner, so I had to overslow the truck down too much in the corner and that’s what made the difference. But nevertheless, it was a pleasure to race for them and good point day for the 51 team.”

Prior to his Truck Series start, Tagliani ran the NASCAR Pinty’s Series race earlier in the day and was able to share his own feedback on how the trucks race at the Canadian road course.

“It’s good. The trucks are good,” he explained. “This year, we came with a different tire and maybe we needed to make some changes. You can see that the competition is high. It’s not a very technical road course, but at the same time, it makes for good racing. It’s tough, and if you’re just a little bit off, you can’t make it up.”

Tagliani’s runner-up finish marked the 11th top-five run for the No. 51 Toyota in 18 races this season. Running for the owners’ championship it currently sits third in the standings behind GMS Racing’s No. 24 (Brett Moffitt) and Niece Motorsports’ No. 45 (Ross Chastain) with five races remaining.

No driver wants to crash their truck… ever. It creates a lot of extra work for the at-track crew from unloading, moving the motor and putting in a setup that will work best. It creates even more work when the team doesn’t have a backup at the track, and that’s exactly what happened to Jordan Anderson Saturday afternoon.

Despite not having a backup truck to just roll out and move forward, the No. 3 team didn’t quit and pack it in for the weekend. Instead, they worked to tear apart the damaged portion of the truck and put it back together in time for Sunday’s qualifying and race. The progression from the crashed truck to the version of it where it’s hard to see where the repairs ended at a quick glance is nothing short of impressive.

This team never gives up! ??

From yesterday after practice to this morning…. pic.twitter.com/JB3eAg6ku5

Fast forward to Sunday morning after all of the team’s thrashing to repair the truck enough to qualify and race. That’s when Anderson posted his career-best qualifying position at Mosport of 20th, and by the time the checkered flag flew later in the afternoon he had a 16th-place finish to show for all of their hard work.

Big damage for @ToddGilliland_ who found himself in a tire barrier! pic.twitter.com/V0idd8m8D5

Number of Rookies in the Race: 4

Points Update: Two victories in the two playoff races the Truck Series has run so far means Brett Moffitt remains as the championship leader. He has a 22-point advantage over Ross Chastain, who also has a 22-point lead over Stewart Friesen in third. But that’s where it gets interesting because just 18 points separate Friesen in third and Tyler Ankrum, who currently sits in the eighth and final playoff spot.

Matt Crafton sits one point behind Friesen and has a single marker over Austin Hill, who jumped from seventh to fifth with a solid fifth-place run. Two points behind Hill is regular-season champion Grant Enfinger, who also holds a two-point advantage over Johnny Sauter in seventh and currently one of the two drivers who would be eliminated.

Ben Rhodes leads the rest of the drivers outside the playoffs and has expanded his lead over Harrison Burton to 46. Sheldon Creed now sits just 15 markers back from Burton in 11th, while Todd Gilliland is 12th, just nine points behind Creed.

Successful business trip to ??! Great team effort from everyone at @GMSRacingLLC and @TeamChevy this weekend. We’re hitting on all cylinders right now. Glad I could put @CMRroofing into victory lane this weekend! pic.twitter.com/lNUZ5CW3Mu

We'd like one invitation to this week's team meeting, please. https://t.co/wHjRWJFKqV

Up Next: The Truck Series takes some time off before heading west to Las Vegas Motor Speedway on Friday, Sept. 13. Coverage for the World of Westgate 200 begins at 8:30 p.m. ET on FOX Sports 1; the race can also be heard on your local MRN affiliate and SiriusXM NASCAR Channel 90.

Moffitt needs to go. They tried to put him in his place last year, but alas, he’s back. Which trust fund baby is going to step up and kick him out of his ride this year? I mean, it’s absurd… Racing is a hobby for the ultra rich, we have no place for people who are too poor to bring their own money to the track! Keep these poor, albeit talented, peons out of our NASCAR!!

Also, what did Dippel do? I read one report (in the twitter link above) that he was caught ripping tags off of mattresses and pillows. LMAO – props to whoever came up with that one! But really, what did he do? I’m guessing he said something really, really bad about the France family.

Who cares what Todd Gilliland did, other than you and Mikey and Fox crew. His day was just like his whole season. Seems y’all are trying to push a mediocre driver down our throats. Bet Kyle Busch and sponsors aren’t listening.

I used to look forward to the road course races in all the series. But now that nascar has the two competition cautions ( I mean stages) they really pretty much suck. IMO Lew