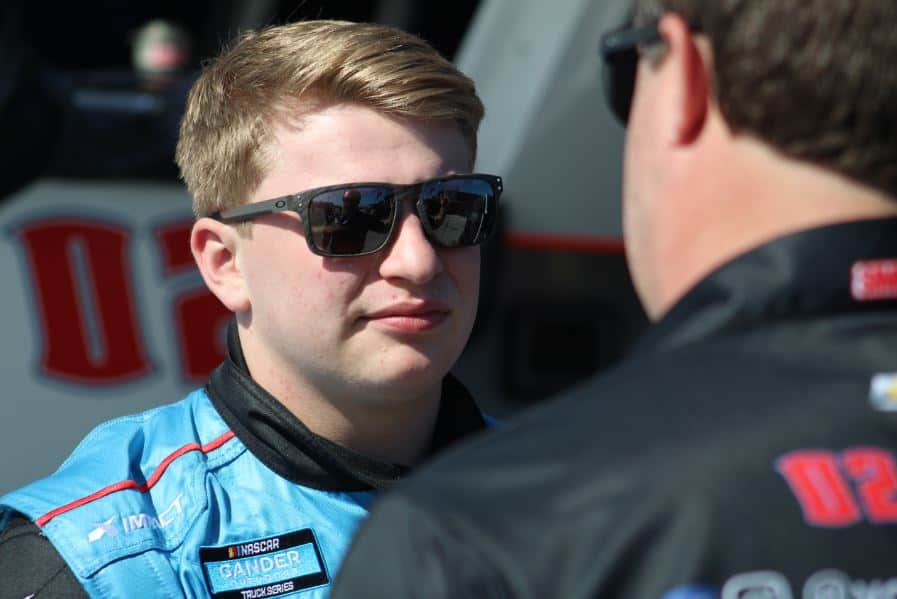 Tyler Dippel stole a fair number of headlines last weekend, and he didn’t even run the Gander Outdoors Truck Series race at Canadian Tire Motorsports Park. Friday evening (Aug 23), Motorsport.com reported the driver of the No. 02 Chevrolet had been suspended indefinitely for “actions detrimental to stock car racing, including a violation of the sport’s code of conduct.”

That seems like a really broad statement that’s really left open for interpretation, right? In fact, “actions detrimental to stock car racing” seems like it’s associated with most penalties, and I guess that’s for good reason since any violation of the rule book could bring into question the legitimacy of the sport.

With that said, the 2019 Truck Series Rule Book has a specific section dedicated to member conduct, just like the Monster Energy NASCAR Cup and Xfinity series versions of it do. It’s a wide-ranging section that lines up some of the basic things expected when it comes to behavior of any of NASCAR’s members, but the basics indicate “correct and proper conduct, both on and off the racetrack” as part of any member’s responsibilities.

Of course, the questions that followed surrounded what Dippel could have possibly done for NASCAR to suspend him indefinitely. Right away, it was clear it wasn’t a failed drug test or the suspension would have been listed as a violation of the sport’s Substance Abuse Policy. Speculation ran rampant through social media with various people claiming sources indicated this or that reason for the suspension, but nothing was confirmed at that point.

The following morning, Young’s Motorsports broke its silence, releasing a statement and announcing DJ Kennington would pilot the No. 02 Chevrolet in Dippel’s absence.

While it was finally something from the team/driver, the vague statement left more questions than answers. What had Dippel done to warrant a suspension the Friday night before drivers were set to practice at Mosport?

Throughout the weekend, people continued to speculate and clamor for more information, and even analysts Todd Bodine and Jeff Hammond chimed in on the Truck Series pre-race show with their own harsh words for Dippel, despite the lack of public knowledge.

Finally, the circumstances surrounding the suspension became a little clearer.

Dippel was charged with a misdemeanor of reckless driving (eventually guilty of an infraction of improper driving) in Virginia during the race weekend in March, according to online court records.

The thread, which can be seen in full by clicking on FOX Sports’ Alan Cavanna’s name above, went on to explain that Dippel was apparently pulled over for speeding, consented to a search and troopers found “’Amphetamine and Dextroamphetamine’ prescribed to someone else in a pill bottle inside a backpack.”

Because of those findings, Dippel was issued a ticket to appear in court Wednesday (Aug. 28), while NASCAR confirmed that incident as the reason he was suspended.

Well, that certainly explains it. After all, one of the sections of the rule book that he was suspended under (12.8.1.e) indicates that indefinite suspension is called for when someone is “charged with or convicted of significant criminal violations.”

It doesn’t compare to the rumors that have already smeared Dippel’s name throughout social media though. It also raises more questions about the 19-year-old’s future. After all, people tend to assume the worst right off the bat, meaning in the court of public opinion, he’s guilty of something egregious and several have suggested he “threw away his career” or “he shouldn’t be allowed back.”

Fast forward to Tuesday, and a report from DirtTrackDigest.com that suggested Dippel may only be guilty of a traffic violation.

This revelation stated he was pulled over for changing lanes without signaling, something that directly contradicts the earlier reports from FOX Sports. It goes on to explain that after Dippel consented to a search of the vehicle, troopers “discovered a backpack containing medication that was prescribed to a third person, who was not present at the time of the pullover” and that the backpack belonged to that person, who had, in fact, put it in his car.

As we all know, many have assumed these pills found in the car at the time Dippel was pulled over were ones he was taking, though the report from DirtTrackDigest.com also claimed he had just passed a random drug test at Bristol Motor Speedway and has passed a voluntary test since he was pulled over.

Wednesday, Dippel appeared in court as he was scheduled, and wouldn’t you know it that all of the facts hadn’t come out yet. According to a statement issued by the driver himself after his appearance, the charges for possession of a controlled substance were dropped. You can read the statement he posted to his Facebook page in full below:

I would like to start by apologizing to my fans, Young’s Motorsports, NASCAR, Gander Outdoors, our partners, and my family and friends for the grief this situation has caused. Due to an ongoing investigation, we have not been able to speak on the topic until today.

On August 18, while driving home from the Orange County Fair Speedway, I was pulled over for changing lanes without proper signal.The trooper asked my passenger and myself if we had been using drugs and we responded with “no” – because we hadn’t. The trooper continued to question us and then asked to search the vehicle, which I gave him my consent as I had nothing to hide. In the back of my truck was a friend’s backpack who was not with us containing his prescription medication. Because it was in my vehicle, I was charged with criminal possession of a controlled substance. Upon my appearance ticket, I contacted NASCAR within hours to inform them of the situation. Due to the NASCAR rule book and code of conduct, they ruled to suspend me indefinitely. I respect their decision.

I along with my team will work closely with NASCAR to hopefully be reinstated so I can be back in the Young’s Motorsports No. 02 Chevrolet. I take full responsibility for my actions.

Thank you again to everyone who has supported me. I look forward to seeing everyone soon.

Well, there you go. Had everyone just had a little patience and let the facts work out, there could have been much less outcry. But instead, the social media world and even FOX Sports’ own analysts had to share their opinions before knowing and understanding the whole situation. And what’s worse is Dippel’s reputation is tarnished and he’ll have to work to rebuild that reputation even though the only thing he’s guilty of is a minor traffic violation.

So where does he go from here? One thing that stood out to me in Young’s Motorsports’ statement that came out Saturday is the organization never mentioned that Dippel had been fired. Right away that should have been a good indication that the team stood behind its driver and there was likely a misunderstanding of some kind.

For what it’s worth, though, NASCAR was right in suspending Dippel based on the information it had at the time. If he was, in fact, in possession of a controlled substance illegally, he certainly didn’t deserve to be racing, and the sanctioning body’s hand was forced based on its own rule book.

Remember the Kurt Busch suspension in 2015? He was immediately suspended when a protective order was issued against him, but that suspension was lifted after it became clear he wasn’t facing any criminal charges for the accusations of domestic abuse that were lobbied by ex-girlfriend Patricia Driscoll. Yes, there was a path Busch needed to follow to return to the sport, but the timeframe between the suspension being issued and then later lifted was a matter of a few weeks, and his career has continued on for a few years since that matter.

I’m not saying Dippel’s situation is the same — quite the opposite actually. But what I am saying is that at this point, since the rookie driver has been cleared of any major criminal charges, the right thing for NASCAR to do was to lift that suspension as immediately as possible.

And that’s exactly what the sanctioning body did. On Wednesday night, Dippel was cleared to race as early as the next Truck Series event at Las Vegas Motor Speedway in a couple of weeks.

And let this be a lesson to everyone not to assume the worst in any situation before taking the time to learn all of the facts.