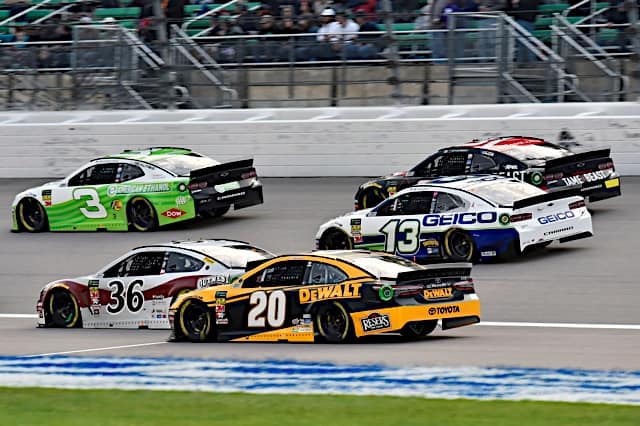 With a new racecar on the horizon for NASCAR, there has been plenty of talk and speculation about whether, and how, it will make the racing better for fans.

That’s a great conversation to have, but first, there has to be a conversation about what went south in the first place. Why isn’t the racing the same as it was 20 or 30 years ago? While this year’s races have, by and large, been an improvement over a year ago, and the racing at any point in history wasn’t perfect, something is different.

The cars get the lion’s share of the blame.  Some of that’s on NASCAR, some is on the teams, and some is on the evolution of the street versions of the cars we see on track. It’s for sure the area that needs the most attention going forward.

Many things have changed in the last two decades. The cars, the rules, the drivers—the list could go on. Many, if not most, of those changes have been analyzed and hashed over and over by just about anyone who cares about NASCAR for any reason.

So, here’s one that hasn’t.

Before we take a closer look, no, I’m not saying that this (or any one thing) is the reason for what’s on track today.  I don’t think it’s an answer in and of itself, and maybe it’s not one at all. It was just a late-night thought. But it’s hard to ignore.

In the days when fans were flocking to NASCAR in droves, teams, lacking some of the technology they have now, figured out what worked for their drivers at different tracks by—wait for it—going to different track and testing.

Teams were allowed several tests a year at sanctioned tracks. There was a multi-day test to kick off the year at Daytona, but after that, teams could go to the tracks where they felt they needed seat time and data and put the driver in the seat for as many laps as they wanted to make for the duration of the test, usually a couple of days.

That slowly went away as NASCAR changed the rules.  First, the number of tests allowed was reduced, then all tests were selected by NASCAR and open to all, and then testing at sanctioned  tracks was eliminated altogether.

There was a reason, maybe a good one, for the change. Testing is expensive, and the smaller teams couldn’t afford the same opportunities as the bigger ones. Eliminating testing was a way, NASCAR believed, to create parity. If nobody could test, nobody could gain an advantage.

That’s flawed thinking, because teams should be able to gain an advantage if they come by it honestly. They should be able to gather data and try things. The test ban doesn’t really close the gap between the haves and have-nots, because the big teams simply found technology to take the pace of the live tests. Seven-post shakers, wind tunnels, dynamometers, and simulators have replaced the driver in the seat at the track turning laps.

So have the smaller teams gained anything here? If they form alliances with bigger teams, they might get some use of the technology. On the other hand, many small teams have inexperienced drivers and simulators are great, but don’t replace track time doing the real thing. Sometimes you’d see a smaller team joining a larger one at an at-track test, thereby sharing the costs, which were significant—estimated to be well into six figures for a two-day test session when taking into account the cars and engines, personnel, track operating costs, ambulance crews and every other bit and piece. Either way, the smaller teams are behind, though 20 years ago, they didn’t seem as far behind as they do today.

Recently, NASCAR has turned to the All-Star race as a test session for possible changes, but that’s not enough.  Teams can’t gather data during the race, and it’s only a handful of laps and a couple of practice sessions—even less for the smaller teams running the last-chance race. NASCAR has held open sessions at Charlotte in the off-season on occasion, but they don’t race at Charlotte in December, and tracks are very weather-sensitive.

Winter Daytona testing was its own animal, as much for fans as teams in a way. Spread over two weeks, with half the cars one week and the other half the next, it was a reminder that real racing was just around the corner, a slow rousing out of winter doldrums. Teams could try the year’s changes before speedweeks, ensuring they brought the fastest cars.

But there’s another difference, one that might make live testing less relevant than it once was after all. Teams can’t choose suspensions or gears or much of anything to go faster. Setups are so limited, do teams need days to try them anymore?

That’s its own can of worms. I’m very much in favor of giving teams more areas to work, and doing that would make testing a valuable tool.

So, how relevant would live testing in today’s NASCAR.  Surely it would benefit the drivers.  Simulators are a fantastic tool, but they aren’t the real thing. The advantage to simulators is, of course, that a mistake doesn’t destroy an actual half-million-dollar racecar.

The question becomes whether simulator information is more or less valid than love data. Simulators can change weather and track conditions, on-track tests are stuck with the weather Mother Nature provides, which may or may not be the same as race weekend. But do they really replace real pavement under real tires under the driver’s backside?

If NASCAR were to allow live testing, would they listen to teams as they gathered results? If a team found a suspension combination that worked, would NASCAR allow other teams to try it?  If they would, and then use that data to make race rules, it could be a winner for everyone. If not, then there’s less incentive for teams to innovate.

How big a piece of the puzzle is the lack of testing for teams? Maybe a big one, maybe not…but it is a piece, and it’s worth examining. It’s also worth using the data teams could gather to make positive changes going forward. So while there’s a cost involved, there’s a chance to make it worth it for teams and for NASCAR. It’s time to take the shackles off the teams and let them test…and maybe let the results driver change.