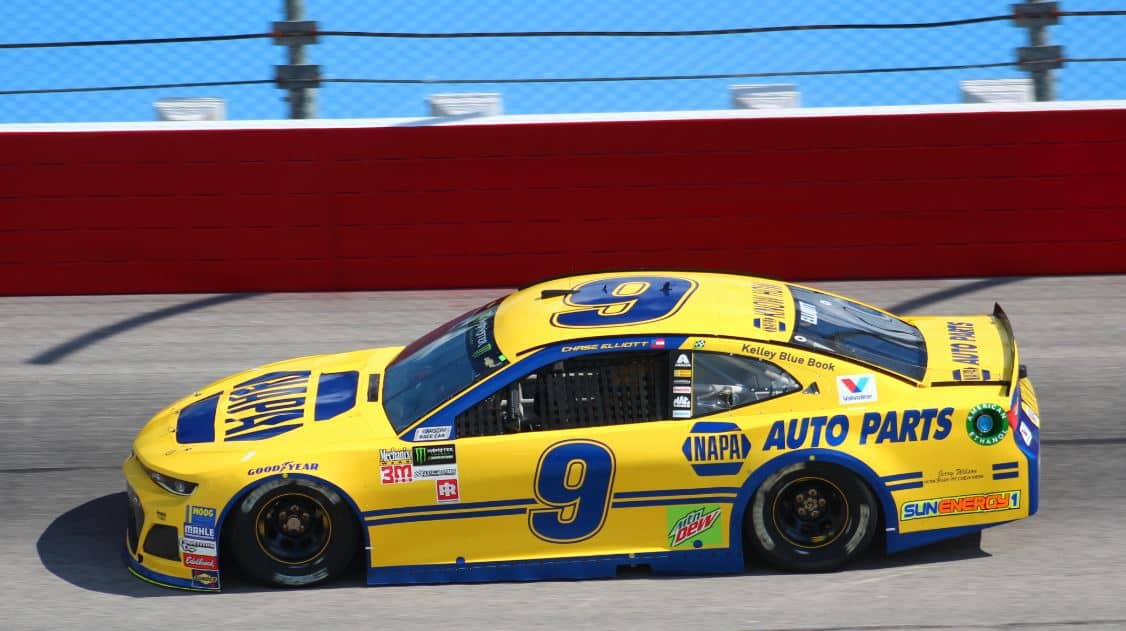 It’s that time of year again: the Monster Energy NASCAR Cup Series and Xfinity Series return to Darlington Raceway for Labor Day weekend and its festivities, leading up to the Bojangles Southern 500 on Sunday, Sept. 1.

This year, the theme throws back to the years 1990-1994, though some chose schemes outside that period. A few teams throwback to cars in movies, while others mirror their personal or family vehicles. Some schemes resemble racecars from the 1950s, while others are as recent as 2011. There’s even a throwback to a sponsor’s tractor design.

Many teams and drivers revealed their throwback designs, though not all chose to participate in the weekend’s theme. Those who announced their schemes are included below; if a driver isn’t listed, they either aren’t running one or haven’t released it at press time.

StarCom Racing Honors NASCAR Veteran @SMR_114 at @TooToughToTame. SCR is representing the #40 @coorslight Dodge that Marlin drove in his final Cup Series victory at Darlington in 2002. We are also proud to have @MichaelJFoxOrg on board with us for this race! #GoTeamFox pic.twitter.com/Qe5gbevmQ6

Throwback: Sterling Marlin’s No. 40 Coors Light Dodge, which he drove at Darlington in 2002 and in which he won his last Cup Series race.

Two #ThrowbackWeekend paint scheme announcements in one day?? ?@austindillon3 and @RCRracing are celebrating #RCR50 by throwing it back to Richard Childress' racing days in the #3⃣ car! #BojanglesSo500 pic.twitter.com/WQK3pu06sI

Throwback: Caterpillar’s colors and logo from its tractors produced in 1925.

Excited to run this @NAPAKnowHow scheme at Darlington this year. This was based off the last car that my dad ran for my grandad’s team. #di9 #FamilyTradition pic.twitter.com/nMlDAM8tM3

Throwback: Dad Bill Elliott’s scheme when he won his first Cup pole at Darlington in 1981.

Orange you glad to see this fantastic ?, fans?! @Aric_Almirola and the No. 10 @SmithfieldBrand crew will sport the colors of @TonyStewart's 2002 championship-winning car at @TooToughToTame. Tap the ❤️ if you think we'll see them get a win on Sunday. ?#NASCARThrowback pic.twitter.com/SUvRhEQDkz

It's a big day for the #FedEx11 team, unveiling @DennyHamlin's @TooToughToTame throwback scheme honoring Darrell Waltrip, a true @NASCAR legend. RT to wish Darrell congratulations and props to Denny on such a cool scheme! pic.twitter.com/oHbvBeOOlj

Throwback: Darrell Waltrip’s chrome-numbered scheme from the 1990s. This was unveiled at Waltrip’s final race broadcast at Sonoma Raceway before his retirement.

Wait a second…. we're seeing double! ? This Sunday, @ClintBowyer and the No. 14 @RushTruckCenter / @Mobil1 team will throw it back to @TonyStewart's 2011 #NASCAR Cup Series Championship. Whatcha think of Bowyer's ride for @TooToughToTame, fans?#NASCARThrowback | #GoClintGo pic.twitter.com/XHxp53esxb

Check out the SNICKERS throwback car @kylebusch will be racing at @TooToughToTame Labor Day weekend! Let us know if you'll be tuning in below ?. pic.twitter.com/3euXxQeYKs

As we talked about on the @DaleJr Download, we’re bringing back my 2004 @BassProShops Chance2 paint scheme for @TooToughToTame this year. It means a lot to me because without Johnny Morris and Dale putting me in that car, I probably wouldn’t be where I am today. pic.twitter.com/y2BHm4WBBZ

Throwback: Truex’s first full-time season in the Xfinity Series in 2004, driving the No. 8 car for Chance 2 Motorsports.

Throwback: Harvick’s 2007 Daytona 500 victory scheme in which he edged Mark Martin by two-hundredths of a second. The video highlights a memorable quote from Logano after his 2010 altercation with Harvick.

? THROWBACK ALERT ?@WilliamByron (or @TomCruise ?‍♂️) will be throwin' back to #DaysofThunder for this year's #BojanglesSo500

RT if you can't wait to see this out on the track Labor Day weekend ? @TeamHendrick || #DaysToDarlington pic.twitter.com/cB2c8a2iK0

We're excited to announce that @CoreyLaJoie will be racing the famous @DaleJarrett Crunch scheme for this year's @keenparts @TooToughToTame weekend!

Stay tuned today and this week for merch! pic.twitter.com/RvKZGQZoVk

Drumroll, please! @Mc_Driver gives a nod to Jimmy Means with his @TooToughToTame throwback scheme. RT and comment if you’re excited to see this bad boy on track for the #NASCARThrowback weekend!

Throwback: Jimmy Means’ No. 52 Alka-Seltzer scheme from the late ’80s to early ’90s. Front Row Motorsports was originally a partnership between Means and Bob Jenkins that lasted a year. Jenkins then broke away and founded FRM.

Happy #NASCARThrowback week! This weekend at @TooToughToTame, @matt_tifft will run a special paint scheme in honor of the Dirt Late Model car his family owned when he was growing up.

We got the @shrinershosp Ford Mustang colors dialed in perfect for this weekends @TooToughToTame race. Car will look great when it hits the track on Friday!!

Throwback: David Pearson’s Torino Cobra from 1969, when he won his third and final championship. It’s also the year Pearson became a Shriner, of which Ragan is also a member.

We are excited to unveil the No. 43 @victoryjunction Throwback that @bubbawallace will race at @TooToughToTame, and proud to honor Adam and his vision of Victory Junction with this special paint scheme! #VictoryJunction #FeelYourHeartRace #15GoingonForever pic.twitter.com/8za3nWhTZJ

Throwback: Honoring the late Adam Petty with a scheme similar to Petty’s first ARCA victory in 1998.

Throwback: Johnson’s 1990 Chevy Thunder Sportside from his off-road racing days. He drove this truck in the 1995 Baja 1000 Trophy Truck division.

Excited to share the @Jacob_Companies paint scheme for the throwback race next weekend @TooToughToTame ! pic.twitter.com/6FzsobMQL3

In 1953 Bill Blair won at Daytona when they raced on the beach and HWY A1A. This design is to honor Bill Blair, and all the early racing pioneers, who helped shape what is now known as NASCAR, and also to the role High Point, NC played in the early years of stock car racing. pic.twitter.com/YDd7YAPEyN

Look at this beaut ?

Throwback: Tim Richmond’s No. 25 scheme from 1986-87, when Richmond drove for Hendrick Motorsports.

Here it is…our No.95 IMSA GTO Throwback Toyota Camry for this weekend @TooToughToTame!

For @GarrettSmithley, this weekend means more than just throwing it back to NASCAR’s history. He will be honoring the late Mike Mittler of @mittler_bros with this tribute to one of NASCAR’s most recognizable independent team owners. #TeamJDM | #NASCARThrowback pic.twitter.com/MGZBF07J9D

Pretty pumped about this!! Everyone’s always asked us when we were gonna do a Buckshot throwback! And first race for Production Alliance Group @TooToughToTame! https://t.co/uT0LFVANcq

To prepare for the future, @MichaelAnnett is revisiting the past this Labor Day Weekend @tootoughtotame…

Excited to be part of the throwback weekend and honor @kylepetty’s 1980s scheme at Darlington Raceway this weekend! pic.twitter.com/zi9WXx1qqf

We are proud to honor the 1991 NASCAR Busch Series Champion and 2020 NASCAR Hall of Fame member @Bobby_Labonte with our South Carolina Education Lottery Chevrolet driven by @bjmcleod78 later this month at @TooToughToTame. #TeamJDM | #NASCARThrowback pic.twitter.com/s6dBdyIFXO

Super pumped to unveil my paint scheme for @TooToughToTame this is dedicated to my team owner Bobby Dotter. He drove this pink machine back in 1991! I’ve been looking forward to #Throwbackweekend all year! Hope to see all you fans in Darlington??@NASCAR pic.twitter.com/eCyp2VWbza

We're so excited to see @DaleJr back behind the wheel of the No. 8 @Hellmanns Throwback later this year @TooToughToTame! Watch this video for more and to find out how you can still participate in the Race to Fight Hunger.

? THROWBACK ALERT ?@Justin_Haley_ will be sporting this Raybestos scheme at @TooToughToTame, honoring the same design @JeffBurton raced back in 1994. See it in action Labor Day weekend on @NBCSN! #NASCARThrowback pic.twitter.com/ZjeiUUxZj1

Throwback: Ken Schrader‘s No. 25 Budweiser scheme he drove in the mid-1990s for Hendrick Motorsports.

Check out the No. 22 @MoneyLion Ford Mustang Throwback Paint Scheme for Darlington! @AustinCindric is bringing back the look of Roger Penske’s 1963 Pontiac Catalina — the car that “The Captain” drove to his only NASCAR win in the Riverside 250.
#NASCARThrowback | #MoneyLion pic.twitter.com/Lie6GgZRIl

In case you missed @NASCAR #RaceHub last night, here's what you didn't see! @JoeyGaseRacing is turning up the heat at @TooToughToTame with a hot & spicy @Team_Onion #35 throwback paint scheme. We can't wait to see this baby hit the track!#NASCAR #Throwback #CarolinaCooker #ASC pic.twitter.com/3yyS8oG2bC

Throwback: Another Days of Thunder tribute, this time the No. 51 Exxon paint scheme.

@MhrRacing The Tribute To Service Charity Theme Car @TooToughToTame was designed in honor of all whom serve their community, their Nation, and honor our fallen heroes gone too soon. Further details on this very special car will be released this week, stay tuned pic.twitter.com/owvSKoWVA2

It's that time of the year y'all ?

Morgan Shepherd’s throwback is to his first cup win in 1981. Missing from your list, sadly. PR just posted on his site today…