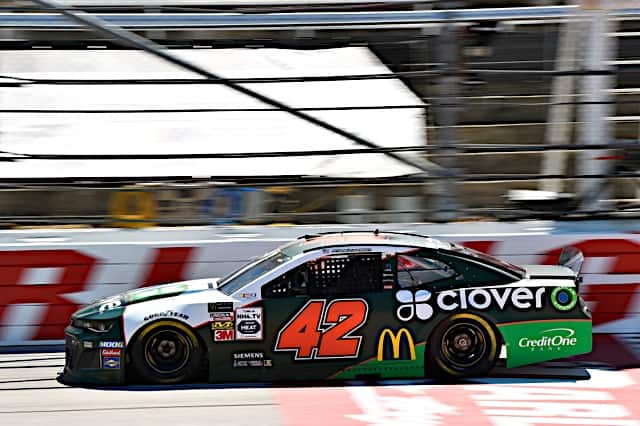 After a week off, the Monster Energy NASCAR Cup Series returns to racing this Labor Day weekend for the Bojangles’ Southern 500 at Darlington Raceway.

Many cars will be decked out in special throwback paint schemes, honoring drivers and NASCAR’s history. It’s truly a special event.

Part of what makes the weekend special is knowing how difficult it is to conquer “The Lady in Black.” Also known as “The Track Too Tough to Tame,” Darlington is a uniquely shaped 1.366-mile oval with one end smaller than the other. Slightly shorter in length than the 1.5-mile tracks, many vehicles have literally earned their stripes here. Since it is a fairly grueling racetrack, choosing the right drivers in fantasy will be challenging.

When making your DraftKings roster, you’ll want drivers with fast and strong cars that can finish well and lead several laps. In recent history here, either one driver led well over 200 laps or two drivers led over 100 laps. That’s a large chunk of the race, which is 367 laps long. If you choose the right dominator(s), you have a very good chance to be in the green. Additionally, you’ll need drivers who have the ability to finish well after starting further back. These place differential points could be few and far between, depending on where the drivers qualify.

Inspection is Sunday (Sept. 1), and drivers who fail will drop to the rear before the race. Be sure to check and see whether any changes to your lineup are needed. Now, let’s see the drivers I’m targeting for Sunday’s race.

Hamlin has to be on your daily fantasy radar. The driver bearing chrome numbers this weekend is one of only three active drivers with two victories and has the best average finish. The Joe Gibbs Racing driver has three top fives within the previous four races and has led 205 laps in that span. He also generally starts within the top 10, which does put him at a risk should he encounter trouble on the track. Still, he has a great chance to hit at or near his salary value and should be considered as a core driver.

In addition to his stellar history at Darlington, Hamlin is on a six-race top five streak, including two victories. One of those came two weeks ago at Bristol, where he passed Matt DiBenedetto in the closing laps. He’s certainly shown his strength as a lap-leader, with 235 laps led in this stretch. Plus, Hamlin had the second-fastest 10-lap average in final practice. Though this is a tough track, he proved twice he could tame it, and is a great option for your DraftKings lineup.

Larson has been Craven (er, I mean craving) a win, and could definitely do that here. The Chip Ganassi Racing driver only has one finish thus far outside the top 10: 14th two years ago. He (along with race winner Hamlin) led 124 laps in that race, and last year, Larson led a whopping 284 laps. That’s a significant chunk of the night, even though he ended up third.

He also has been heating up in recent weeks, as he has five top 10s in the past six races, including a third at Michigan. He led 62 laps at Bristol and showed speed in both practice sessions Friday, having the second-fastest lap speed and the best 10-lap average in final practice. Larson could very well produce similar results as last year’s race and would have a high DraftKings score should that happen. He is somewhat expensive, though, but could be worth it in the end.

Happy won this race five years ago in 2014 and led 238 out of the 374 laps available. He also has five top-five finishes in the past six Darlington races, and led 214 laps in 2016. Like Larson, he too has warmed up just in time for the playoffs around the corner. Before a broken locker ended his night at Bristol, Harvick had two victories (at New Hampshire Motor Speedway and Michigan International Speedway) and four top 10s. Also, he had the sixth-fastest 10 consecutive lap average in final practice. Finally, he’s at his lowest price in a really long time and could save you a ton of salary, should you decide to use him.

“That Jones boy” is also searching for his first win of 2019, and could quite possibly find it here. He finished fifth and eighth in his first two Cup races, and had 40 fastest laps in 2018. Prior to the Consumers Energy 400 at Michigan, he had four straight top-five finishes, including a second-place finish at Pocono. However, he could try to play it more safe and not take any risks that might set his playoff hopes back. Still, Jones’ small history suggests he would perform well.

Newman is right below Jones in the point standings in 15th. He needs some good finishes to help him increase his playoff chances, and Darlington could be the track to do just that. In 2017, he qualified 17th and finished seventh, 10 spots higher. He also finished 10 places higher in 2015, where he finished 13th. At this track, any type of place differential points could benefit your DraftKings score, especially if they finish well. While he competes for Roush Fenway Racing now, he does have one top five and eight top 10s this season. If he’s able to take advantage of other’s misfortune, he could earn you enough fantasy points to cash your contests.

Buescher reminds me of the Little Engine that Could; his JTG-Daugherty Racing team has produced pretty good finishes this season. He hasn’t ended any race outside the top 20 since Kansas in May, and finished 10th at Kentucky last month. Since he doesn’t usually lead any laps or have the fastest lap, his main usefulness is his place differential. Buescher has a tendency to avoid wrecks and major mistakes, and though he doesn’t always qualify well, he finishes much higher than he starts. Lastly, he had the 12th-quickest lap speed in opening practice Friday, so he might stay on the lead lap. If he does, he’ll be a great value option for your lineup.

Though Byron only has one Cup start at Darlington and had a not-so-good finish, I wouldn’t count him out just yet. In his lone Xfinity race here, he finished fifth after starting sixth. Also, he does have two top 10s in the last four races this year, which includes a fourth-place finish at Pocono. He earned 67 DraftKings points in that race for those who placed him in their roster. Finally, his single-lap speeds were very quick in both practices, posting the second- and third-fastest times. Since Byron doesn’t have as much history at the track Too Tough to Tame, he comes at a risk but could be well worth it. Perhaps he can channel his inner “Days of Thunder” passion into his driving ability.