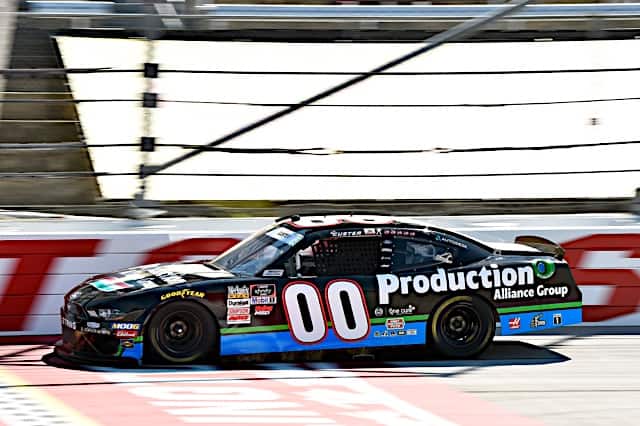 Cole Custer scored his sixth win of the season after initial race winner Denny Hamlin was disqualified, capping off the first race of throwback weekend at Darlington Raceway. Saturday’s (Aug. 31) race saw Hamlin outrun a challenge from Custer to take the checkered in the Sport Clips Haircuts VFW 200, but the No. 18 failed postrace inspection — ride height, specifically.

Hamlin, piloting a Bill Elliott throwback scheme, drove his way from the back of the field to the front after starting 37th. He went to a backup car after a practice incident, coasting around the track on his qualifying lap.

Custer was solid all day, even without leading any laps. Running a throwback paint scheme to Buckshot Jones’ 1997 AquaFresh car (and with Jones himself at the track), he maintained a presence near the front.

Ryan Blaney led early from the pole with Tyler Reddick‘s No. 2 growing ever larger in his rear view mirror, relinquishing the lead on pit stops after a John Hunter Nemechek spin.

Reddick grabbed the lead at the egg-shaped oval during that cycle and took control after the restart, winning the first stage. Brandon Brown went around shortly after the restart, tagging the inside wall, while Blaney chased Reddick back down for the lead.

Blaney did indeed get by Reddick, winning the second stage in his No. 12 Ford.

Dale Earnhardt Jr., just two weeks removed from a scary plane crash and running his only race of the season, grabbed a seventh-place finish at the end of stage two, having run well all day. Earnhardt finished fifth after Hamlin’s disqualification.

Custer and Justin Allgaier ran near the front for much of the race as well, and they joined Reddick in a battle for second, third and fourth at the end of the stage, while Hamlin crept up into the top five.

Blaney held serve off of pit road with Custer and Hamlin behind him. Hamlin got by Custer’s No. 00 and then slid past Blaney for the lead with 27 to go.

The final caution flew with about 15 laps remaining, setting off more pit stops and stacking up the field. Hamlin kept the lead while Custer jumped to second.

The green flag flew with exactly 10 laps to go; Hamlin took off and retained the lead, while Custer chipped away behind him.

On the final lap, Custer got right up to the back of the Cup Series regular, diving into turn three. The California native couldn’t quite make it stick, and Hamlin sailed across the stripe with the victory – until inspection.

Hamlin’s average finish at Darlington was the best of any driver at any track in the series, and would have dropped from 2.7 to 2.5 with the win, but plummeted to 5.67.

Instead, Custer took home the win after a solid day in South Carolina, doing Georgia native Jones proud and tying Christopher Bell for the most wins on the season.

The next race for the Xfinity Series will be Saturday, Sept. 7 at Indianapolis Motor Speedway, with the regular-season finale Lilly Diabetes 250 getting underway at 3 p.m.

Kinda figured that this would happen

BIG SURPRISE, not. Rookie writer, could you have given us a clue on the reason for the DQ?

Ken
Reply to  Fed Up

He did at the end of the first paragraph: “but the No. 18 failed post race inspection – ride height, specifically.”

fed up
Reply to  Ken