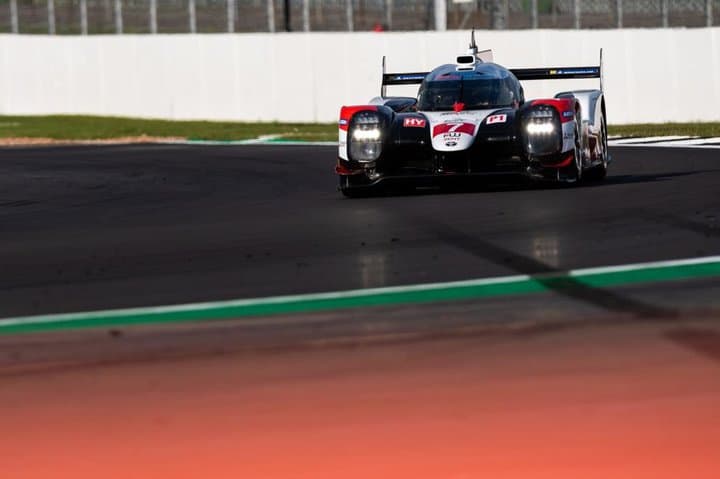 Toyota GAZOO Racing’s Kamui Kobayashi and Mike Conway combined to set an average lap speed at 137.454 mph to win the pole for Sunday’s 4 Hours of Silverstone, the 2019-20 season opener for the FIA World Endurance Championship. Kobayashi’s lap during his portion of the session was the only lap of the weekend under 96 seconds at 137.486 mph. Conway’s lap was just marginally slower at 137.421 mph.

Kobayashi and Conway’s average lap was three-tenths of a second faster than teammates Kazuki Nakajima and Sebastien Buemi. Rebellion Racing’s Bruno Senna and Gustavo Menezes were third, half a second back. The No. 3 Rebellion R13 of IMSA regular Pipo Derani and Nathanael Berthon were fourth quickest, while Team LNT’s Oliver Jarvis and Michael Simpson were fifth.

LMP2 saw Racing Team Nederland show the might of their new ORECA 07-Gibson. Giedo van der Garde and Job van Uitert averaged a lap at 130.737 mph to win the class pole. The teammates turned in the two fastest laps in LMP2 during the session and ended up nearly three-quarters of a second faster than United Autosports’ Paul Di Resta and Phil Hanson. Jackie Chan DC Racing’s Gabriel Aubry and Will Stevens were third, followed by COOL Racing’s Antonin Borga and Nicolas Lapierre. Signatech Alpine Elf’s Thomas Laurent and Pierre Ragues were fifth.

GTE-Pro saw the AF Corse Ferraris lead the pack. James Calado and Alessandro Pier Guidi claimed the pole with an average lap at 115.595 mph. This lap was one-eighth of a second faster than the sister No. 71 Ferrari of Miguel Molina and Davide Rigon. Aston Martin Racing’s Alexander Lynn and Maxime Martin will start third, followed by Porsche GT Team’s Gianmaria Bruni and Richard Lietz. Marco Sorensen and Nicki Thiim will start fifth in the second Aston Martin. The GTE portion of the session was red-flagged briefly after a spin for Bruni resulted in loose bodywork littering the track.

TF Sport’s Charlie Eastwood and Salih Yoluc won the GTE-Am with their Aston Martin with a lap at 113.739 mph. That lap was one-third of a second faster than the Porsche of Team Project 1’s Matteo Cairoli and Egidio Perfetti. Ross Gunn and Paul Dalla Lana qualified the GTE-Am entry from Aston Martin Racing in third.

Only one of the 31 cars entered failed to set a time in the session. The No. 57 Team Project 1 Porsche that was supposed to have Felipe Fraga and IMSA regular Jeroen Bleekemolen driving did not take to the track due to issues late in Free Practice No. 3 that could not be fixed in time for qualifying.

The 4 Hours of Silverstone is scheduled to go green at 7 a.m. ET Sunday morning.  Coverage of the first three hours will be exclusive to MotorTrendOnDemand.com.  Live coverage of the final hour and post-race will air on Motor Trend.