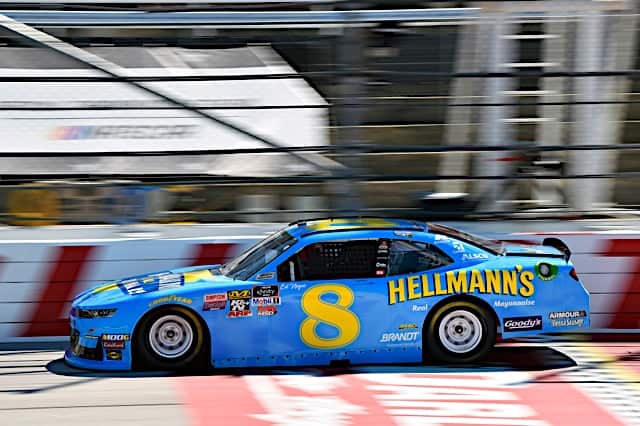 The throwback concept has been a huge shot in the arm for NASCAR since its debut years ago. Different teams harkening back to sponsor liveries of days gone by have stirred long lost emotions that some people who follow the sport thought were lost forever. NASCAR history buff Dale Earnhardt Jr. has been at the fore in embracing the idea, not only on his own cars but on his team cars. This year is a perfect example as Earnhardt embraced an old school blue scheme with yellow numbers while putting Baby Ruth on the car of Michael Annett. Now if we can just get more former sponsors to come back, even if for just one race like what Raybestos Brakes did with Kaulig Racing, it will greatly help the sport.

The buzz around Earnhardt running in this race has been at a fever pitch all summer, and it was heightened more after his plane incident in Tennessee. Being on the grounds this weekend was a true testament to how much pull the 14-time Most Popular Driver still has with fans. The sheer number of light blue, No. 8 shirts is mind numbing. During driver introductions, it was a true throwback to the days of Earnhardt competing on a weekly basis as the roar was deafening. Having Earnhardt compete occasionally is a great shot in the arm for the sport.

Earnhardt’s team car, the No. 1 of Annett, had Baby Ruth on the car in honor of Jeff Gordon. While most of the cars with special paint schemes do not have the actual brand on the car once in a while they are able to and that make it even more special. Going forward, that would be an ideal situation for the sport, especially for the teams near the back of the pack that don’t have sponsors on all of their races.

At the start of Saturday’s Sport Clips Haircuts VFW 200, there were four cars with nothing on the hood of their car. How easy would it be to find one of the sponsors from the series during all of the years of the throwback to sponsor the car for a minimal amount and help out one of these struggling teams. The folks in the big board rooms making the really important decisions need to make this happen so that we quit reducing the number of cars in the regular field for national series.

In Cup, there is actually an example this weekend of an old-school sponsor helping out a smaller team thanks to the press from their throwback scheme. StarCom Racing is throwing back to Sterling Marlin’s Coors Light scheme from the early 2000s on Landon Cassill‘s No. 00 Chevrolet. Cassill tweeted this on Saturday.

Got a call from @coorslight last night about my Sterling Marlin Silver Bullet Tribute Car. They are so excited, they’re going to donate $40 to @MichaelJFoxOrg for every lap we run tomorrow! They’re also helping us out with some tires and a load of cold beer, thanks a bunch! pic.twitter.com/qwOGg924Uk

In addition to a potential donation of over $14,000 to the Michael J. Fox Foundation, Coors Light is throwing in funding for tires (always crucial at Darlington) to the team and post-race beers. This is an excellent way to connect with the Throwback weekend on the part of the Coors Brewing Company.

I just never understood how anyone named France could not understand the value of tradition to Nascar nation. The greed and hubris of Brian left a dent in this sport that the best body man in the business will never fully beat out.