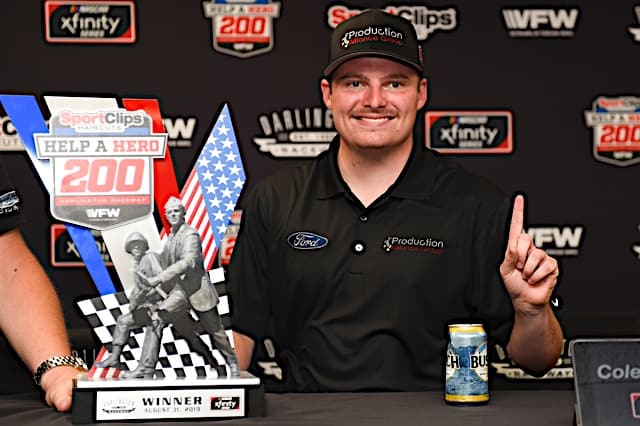 It’s not too often that the key moment in a race at Darlington Raceway happens well after the checkered flag waves. Then again, Denny Hamlin has been making Xfinity Series events at The Track Too Tough to Tame into foregone conclusions for years, winning five of them and racking up a career average finish that was so good it sounded like a mistake.

All of Hamlin’s previous victories in what is now called the Sport Clips Haircuts VFW 200 came from the pole, but for the 2019 edition, he had to do things the hard way — starting from the rear of the field, and with a car that he called so numb in the first stage that it didn’t seem like he’d be able to even make it to the top five, let alone add to his trophy case.

When Tyler Reddick claimed the stage one win, Hamlin was only 13th. By the time stage two ended with Ryan Blaney in front, his No. 18 Joe Gibbs Racing Toyota had begun to come to life and he was up to fifth.

Like Thanos said in Avengers: Endgame, Hamlin was inevitable. His march to the front saw him pass Cole Custer, whose Ford was also fastest later in the race, then get by Blaney to take the lead. A late-ish caution helped add some potential drama to the mix, and Custer gamely attempted to reel Hamlin in with the laps ticking down, but the No. 18 Toyota crossed the finish line first, and that was that.

Or so we thought.

Turns out the one thing that can stop Hamlin at a Darlington Xfinity Series race is post-race inspection. Ride height violations were the culprit in this case, and in a snap, Hamlin’s win crumbled to dust, replaced by what the record books will show as a 38th-place finish.

It’s certainly a talking point in a debate that will likely never be satisfied to everyone’s liking: Should cars that finish second be named the official winners of races when the first-place finishers are disqualified? Custer, after all, led zero laps on the day.

But he was hardly alone there. This wasn’t a Darlington race for the ages by any means, with only three leaders. Hamlin’s gradual rise through the field was the most interesting storyline by a wide margin in an unusually tame dance with The Lady in Black. At least he kept his sense of humor about it after it faded away.

Hey @ColeCuster, I got something that’s your’s.?. I’ll meet ya back in CLT. pic.twitter.com/E8N0SBC7pw

How about that crowd at Darlington? NASCAR tracks haven’t provided attendance numbers for years now, but seeing that many fans for an Xfinity Series race, especially in the frontstretch stands, was impressive. Also, as shown here in a tweet from RSS Racing marketing director Danny Dugan, the line to get in before the race was almost equally impressive.

Undoubtedly, many of them were there to see Dale Earnhardt Jr. run his lone race of 2019 in a car that was a throwback to his dad’s first ever Cup Series paint scheme, and Junior did not disappoint. Despite self-deprecating comments every time his TV colleagues checked in with him, Earnhardt showed speed and savvy all day, passing the likes of Christopher Bell on more than one occasion and ending up with a top five result once Hamlin was DQ’ed.

While Dale Jr, could no doubt satisfy any racing itch in one-off Cup Series appearances should he so desire, having him make annual starts in the Xfinity Series seems perfect since his presence on the entry list turns any race into a must-see affair — particularly when it comes to at-track attendance. He’s already spoken about returning next March at Homestead if sponsorship works out, and there’s no reason to think that wouldn’t juice the gate in Miami too.

It’s worth repeating that there were only three leaders on Saturday afternoon, and only five times the lead changed hands among Blaney, Reddick and Hamlin. The caution flag flew only three times for incidents, none of which were particularly big, and while green flag pit stop sequences can also help shuffle the deck when races are clean in the Cup Series, the much shorter Xfinity Series race lengths mean that is rarely the case and wasn’t this time either.

It was great to see the cars sliding around Darlington Raceway from the drop of the green flag, the throwback paint schemes (some of them, anyway) were terrific, and Buckshot Jones was in the infield for what he said was the first time in forever. Yet this was a boring race for the most part, and there’s really no way to dress that up.

Aside from the winner being unceremoniously reassigned to 38th, not much was downright ugly either. Justin Allgaier got acquainted with the outside wall on several occasions, which might have ruined his day in a Cup car. As the announcers pointed out, though, the Xfinity Series bodies can take a few brushes with the wall and pop back into shape, and Allgaier came home ninth.

His season as a whole is still ugly by his own high standards, but this wasn’t a disaster by any means.

Darlington is more a “rich get richer” track than one where the downtrodden can rise up to steal a victory, and that was especially true this time. Nothing resembling an underfunded team ended up inside the top 10, even after Hamlin got the boot.

With that in mind, the props this week go to Jeremy Clements, who ended up 12th. It was his second-best Darlington finish ever, yet his worst result since Iowa — a testament to how strong the No. 51 Chevrolet has been in recent weeks.

We’ve covered Hamlin’s fate in detail. Blaney’s afternoon echoed much of his Cup Series season to date: Fast at times, but not in position to win races at the end. His final place was third, which felt about right.

“It’s a really strange feeling, honestly — obviously. You don’t want it that way, but it is what it is.” – Cole Custer

“I had a lot of fun. I appreciate all these fans coming out to Darlington. … You just never know how good you are ’til you come back and try it.” – Dale Earnhardt Jr.

A sleepy race overall, saved by the twist ending, the great crowd and the return of Junior. Not bad overall, but definitely not one to remember. The Xfinity Series race has thrown down the gauntlet to the Cup Series in terms of excitement several times in 2019, but this definitely wasn’t one of them, and Sunday night almost has to be better as a result.

The Xfinity Series heads from one historic venue to another for a visit to Indianapolis Motor Speedway. The race itself actually doesn’t have that much history, dating back only to 2012. Prior to that, it was held at Lucas Oil Raceway at Indianapolis, a track many fans wish the series still visited.

Allgaier is the defending champ, so maybe he can break through his frustration at Indy, though it feels like that’s been said multiple times already this year. Coverage of the Indiana 250 begins at 3:00 p.m. on NBCSN.

I’d like to think that the big crowd was more than just Earnhardt’s presence. If that’s all it was that’s pretty sad. People who walk away from Nascar because a guy like Earnhardt, who never won a Cup championship, left the sport are certainly not knowledgeable race people. I love the sport, not just a driver.