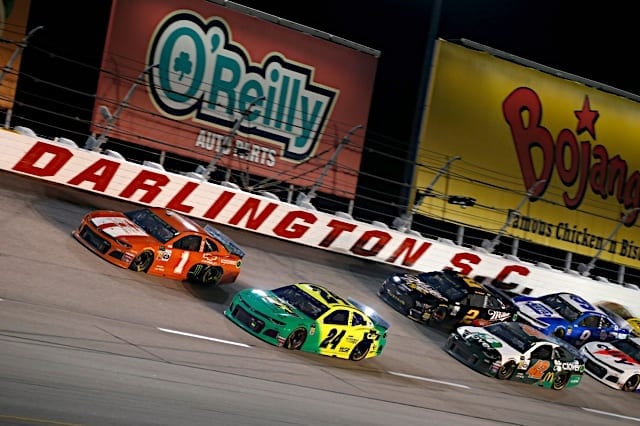 Tradition. That’s the theme of the Throwback Weekend at Darlington Raceway with the Bojangles Southern 500, and despite a start at 10 p.m. ET and not finishing until around 2 a.m., the full race distance was run before Hurricane Dorian could arrive. That commitment, whether in the stands or on the couch at home, deserves recognition.

The forgotten man at Joe Gibbs Racing, Erik Jones, threw back to the debut performance in the Snowball Derby that got him noticed by Toyota, as he held off a hard-charging Kyle Busch in the final laps.

Jones was running a scheme based on one of his late model cars, which is an interesting connection, though obscure for fans.

Front Row Motorsports veteran Michael McDowell hasn’t had a great 2019 season. Yes, he did finish fifth in the Daytona 500, but he angered Joey Logano in the process. Then he had the wrestling match with Daniel Suarez after qualifying at ISM Raceway (Phoenix), and then his No. 34 has crashed out of five races this season, including this weekend.

Drumroll, please! @Mc_Driver gives a nod to Jimmy Means with his @TooToughToTame throwback scheme. RT and comment if you’re excited to see this bad boy on track for the #NASCARThrowback weekend!

On the plus side, the team didn’t run the original Love’s paint scheme design for the fourth year in a row, so that’s something. The scheme they went with instead was Jimmy Means’ Alka-Seltzer car from the late 1980s. While not that impressive visually, Means was a founding part of the team’s early days, which is a cool idea.

Chip Ganassi Racing’s Kurt Busch is flying under the radar. But with his seventh-place run at Darlington, winning Kentucky, scoring five top fives and 14 top 10s, the No. 1 team has an average finish of 11th. He’s also finished every race this year. He likely won’t be part of the Championship 4, but it’s looking solid that he’ll be a part of the eight-driver semifinal round.

Busch does get minus points for his paint scheme, which is a replica of his 1969 Camaro. On a street car that looks amazing, but on a race car it’s incredibly boring.

Richard Childress Racing rookie Daniel Hemric‘s less-than-stellar year continues, as the 28-year-old has just two top 10s and an average finish of 22.4 following his 37th-place result at Darlington, which was his third DNF of the season. The No. 8 car has finished outside the top 20 in roughly half the races in the regular season.

This Caterpillar paint scheme is … some ancient piece of machinery? Maybe a tractor? A gray lump with orange trim in strange places isn’t a good look.

Matt DiBenedetto doesn’t have a ride lined up for 2020 yet, but his recent resume is pretty impressive. His eighth-place run was his sixth top-10 finish in the past 10 races, going with three top fives in that same span.

Here it is…our No.95 IMSA GTO Throwback Toyota Camry for this weekend @TooToughToTame!

DiBenedetto’s paint scheme was a throwback to Toyota’s IMSA GTO effort, a championship-winning Celica from 1987.

Roush Fenway Racing’s Ricky Stenhouse Jr finished 33rd this weekend, which didn’t help a lackluster 2019 season where the veteran driver has just two top 10s and his teammate has been in playoff contention for much of the season. His average finish is 20.4, and he’s run outside the top 20 in 12 events already this year.

Stenhouse also earns a poor grade for not running a throwback scheme of any kind, though in fairness, he did run a Darrell Waltrip throwback at Sonoma for DW’s final race as a broadcaster.

Jones’ German Shepherd Oscar got into the throwback spirit as well, and he also enjoyed the victory lane celebration. No word on whether he also helped eat that pizza for dinner, though.

If there's a rain delay, Corey LaJoie and Bubba Wallace are going to play catch with the fans. pic.twitter.com/zbbi2wtfaP

As has become a rain delay tradition, Bubba Wallace and Corey LaJoie played catch with the fans on the frontstretch.

We're excited to announce that @CoreyLaJoie will be racing the famous @DaleJarrett Crunch scheme for this year's @keenparts @TooToughToTame weekend!

Stay tuned today and this week for merch! pic.twitter.com/RvKZGQZoVk

Go Fas Racing really got into the throwback spirit, to the point of redesigning its Twitter profile picture to resemble the Sprint Cup logo. LaJoie’s No. 32 was very similar to Dale Jarrett’s 1991 Busch Series Nestle Crunch car. Most of the time, the throwback designs don’t quite work because of the differences in the body shape not translating, but it worked very well here.

Also, Nestle had at least two cars that year, as Jeff Gordon was sponsored by Baby Ruth.

? THROWBACK ALERT ?@WilliamByron (or @TomCruise ?‍♂️) will be throwin' back to #DaysofThunder for this year's #BojanglesSo500

RT if you can't wait to see this out on the track Labor Day weekend ? @TeamHendrick || #DaysToDarlington pic.twitter.com/cB2c8a2iK0

William Byron‘s No. 24 was channeling Cole Trickle with a picture perfect replica of the No. 46 Lumina from the 1990 movie Days of Thunder. This should be used for all Hendrick cars when there are sponsorship gaps, since City Chevrolet is part of Rick Hendrick’s auto dealership empire.

It’s not a great movie (Top Gun on land), but it’s fun, and Tom Cruise is Tom Cruise — and for the general public it’s the movie that leaps to mind when thinking of auto racing movies in general.

Finally, Stewart-Haas Racing paid tribute to team owner Tony Stewart’s three championship-winning years, which all looked excellent. That is a really cool idea to honor the past.

NASCAR invades the holy ground of American open wheel racing at Indianapolis Motor Speedway for the regular season finale, and the action will be something like a parade at best.

The Xfinity Series has the Indiana 250 going green around 3 p.m. ET on Saturday, Sept. 7, with TV coverage on the NBC Sports Network. While most fans will be watching college football instead, Chase Briscoe gets a win in his home state.

The Big Machine Vodka 400 at the Brickyard will go green around 2 p.m. ET on Sunday, Sept. 8, with TV coverage on NBC. Directly competing with pro football’s opening weekend, the NFL will win this ratings battle easily.