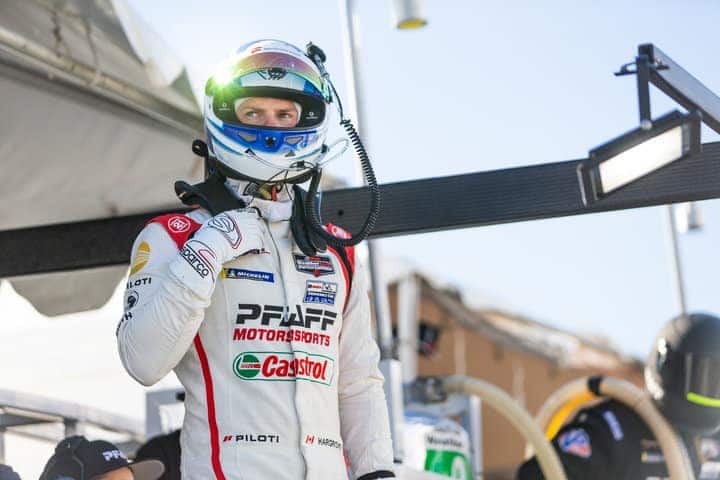 In the past few years, there have been a number of young guns making a name for themselves in sports car racing.  One of these youngsters is Scott Hargrove, a 24-year old racer out of British Columbia.

Hargrove started out in karting before switching to open-wheel racing.  In 2013, he won what is now the Cooper Tires USF2000 Championship, the lowest run on INDYCAR’s Road to Indy ladder.  That earned him a ride in the Pro Mazda Championship (now Indy Pro 2000), where he finished second in 2014 with three wins and 10 podium finishes in 14 races.

At the same time, Hargrove kept his options open by racing Porsche GT3 Cup cars in Canada.  Winning the Platinum Cup in IMSA Porsche GT3 Challenge Cup Canada in 2014 and nearly sweeping the season in 2015 garnered attention.  Moving to Pfaff Motorsports in 2017 brought another dominant season with nine wins in 11 races and another championship.

For 2018, Pfaff Motorsports acquired a Porsche 911 GT3 R and launched a full-time effort in what was then Pirelli World Challenge GT in both the Sprint and SprintX races.  Hargrove was retained to drive in both and excelled.

His series debut at St. Petersburg was marked by winning both the Saturday and Sunday GT races for his one and only weekend sweep.  Those were his only Sprint wins of the season, but consistent form brought Hargrove the GT Sprint championship.

For SprintX, Hargrove gained a teammate in the veteran racer Wolf Henzler.  That was quite the learning experience.

“Wolf was a really fun guy to be partnered with,” Hargrove told Frontstretch at Lime Rock Park.  “I didn’t really know him that well before he joined the team.  He taught me a lot in terms of off-track conduct and what to do [in terms] of fitness, in addition to the driver changes, which were new to me.

“I got to learn quite a bit from [Henzler], and of course, he’s still got it behind the wheel,” Hargrove continued.  “He’s every bit as quick as he once was.”

With the 20-plus year veteran Henzler alongside, Hargrove scored five podium finishes in SprintX races with a best run of second at Race No. 2 at VIR.  That put Hargrove and Henzler third in SprintX points and allowed Hargrove to finish second in Pirelli World Challenge GT overall points behind Toni Vilander.

For 2019, the plans changed significantly.  At Road Atlanta last October, Pfaff Motorsports announced their intentions to contest the WeatherTech Sprint Cup, IMSA’s championship-within-a-championship in the GT Daytona class centered around the sprint races.  Eventually, the plan changed to a full schedule starting with the Rolex 24 at Daytona.  The success in Pirelli World Challenge played a huge role in the move.

“The success last year played itself towards us making the move to come over here [to IMSA] thinking that we could challenge [for wins] and have good results,” Hargrove said.  “Pfaff has always looked to compete on the highest level, and being able to showcase cars that they sell is their goal.”

The move to IMSA for 2019 also resulted in Hargrove getting a new teammate as Zacharie Robichon, last year’s IMSA Ultra 94 Porsche GT3 Challenge Cup Canada champion, entered the fold.  Apparently, Robichon is quite a simple driver to share with.

“Zach’s an easy guy to work with,” Hargrove explained.  “He doesn’t require a lot.  He’s just happy to go out and do his job.  It’s been really great working with him.

“If anyone watched Detroit, he was racing with Park Place [Motorsports] that weekend,” Hargrove continued.  “He led his entire stint.  That just goes to show that he has what it takes [to succeed].”

Finally, the new season brought the newest version of the Porsche 911 GT3 R.  Hargrove describes this car as opposed to the car that he races last year as being better in every way.  It’s simply more refined in every way.  That refined race car was then dressed in a flannel wrap that has proven popular with fans.

Unfortunately for Hargrove, the 2019 season did not start well.  The Rolex 24 at Daytona saw heavy rains stop the race for hours.  Immediately after the red flag, Robichon crashed on the restart, ending their race.  Sebring resulted in a 10th-place finish in class, while a 12th-place run at Mid-Ohio put the duo well down in points.  Things got better at Watkins Glen and Canadian Tire Motorsport Park with sixth and fifth-place finishes respectively, but the team decided to make a move starting at Lime Rock.

For Lime Rock and Road America, Hargrove was taken out of the car and replaced by Porsche Junioren drivers Dennis Olsen (Lime Rock) and Matt Campbell (Road America).  That left Hargrove to work with the team on the pit box.

“I’m on the [pit] stand all weekend, helping out with whatever I think I can chime in on, whether it’s car setup or something going on in the race,” Hargrove explained.  “I can spot something on the [monitors] that can help with strategy.  There are many different things that I can do, but it’s also about helping the guys have the best possible result.”

With Hargrove out of the car and on the pit stand, the team proceeded to win their first two IMSA races at Lime Rock and Road America.  Those performances have allowed Robichon to move up to second in GT Daytona driver points.

The IMSA WeatherTech SportsCar Championship is not Hargrove’s only racing responsibility in 2019.  He has also kept himself busy in the former Pirelli World Challenge GT, now known as Blancpain GT World Challenge America, for Wright Motorsports.  With Patrick Long as a teammate, Hargrove is currently fourth in points with a victory in Race No. 2 at Sonoma Raceway back in June.  Last weekend, the Porsche duo scored a pair of fourth-place finishes at Watkins Glen.

In addition, Hargrove also raced in IMSA Michelin Pilot Challenge for Andrew Wojeczko Autosport (AWA) in a Porsche Cayman GT4 MR alongside Orey Fidani.  While he had never driven with Fidani prior to this season, he was quite familiar with him as Pfaff Motorsports was fielding his entry in Pirelli World Challenge GTS SprintX (now Pirelli GT4 America SprintX).

“I got to watch [Fidani] all last year, even though I wasn’t driving,” Hargrove explained.  “You can see it with the results.  He’s being very safe with the car, which is nice to see.  He’s also bringing the car home clean.  He’s getting up to speed quicker and quicker as well.  For somebody who just hopped in a car because he wanted to go have some fun with no karting experience, I would say that he’s doing a really good job for someone in their fifth year of racing.”

In six races, the pairing’s best finish together was an 11th at Canadian Tire Motorsports Park in July.  Much of the year had been plagued by struggles on-track and a retirement at Watkins Glen.

Unfortunately, Hargrove’s stint in Michelin Pilot Challenge came to an end after a 16th-place finish at Lime Rock.  11 days after this interview was conducted, AWA announced that they were switching from the Porsche to a McLaren 570S GT4 (another brand that Pfaff sells in Canada).  In addition, Chris Green, a racer in his own right that previously raced for Motorsports In Action who serves as the general manager of Pfaff McLaren, joined the team to replace him.

Following the two-race stint on the pit stand, Hargrove returned to the No. 9 Porsche at VIR alongside Robichon.  Together, the duo earned a fourth-place finish in the Michelin GT Challenge at VIR, Hargrove’s best finish of the year.  The run moved the Pfaff Motorsports Porsche to second in the team championship, 37 points behind Meyer Shank Racing with Curb-Agajanian’s No. 86 Acura.