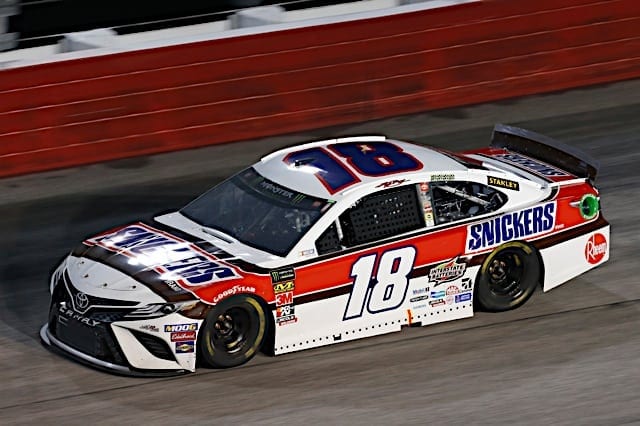 It was an all-nighter for the top stars of NASCAR at Darlington Raceway this past weekend. In the wee hours of the morning, Kyle Busch clinched the 2019 Monster Energy NASCAR Cup Series regular-season championship despite having multiple forays with the Lady in Black’s enticing wall. Can he go two-for-two and claim his second overall title at season’s end?

An impressive streak of consecutive top fives for Denny Hamlin has come to a sudden end. A hard impact with Michael McDowell and Daniel Hemric relegated the Virginian to a 29th-place finish. Is this tough luck that can be just brushed off or could this possibly be a momentum killer for Hamlin?

Kyle Larson turned a lot of heads with his runner-up performance at the egg-shaped South Carolina track. Despite not having any wins at this circuit, Larson has arguably been the most successful driver at Darlington the last several years. Can he grasp that success and transform that into his first win of the season this coming week?

The biggest talk of the town might just be Erik Jones. What is his contract situation? Is he the weak link at Joe Gibbs Racing? Is he joining a new team? Wait a minute, with his recent Darlington win, Jones might just have to take care of some business. Does he have a shot at a championship?

Questions are circulating as another throwback weekend at Darlington has officially come to a close. As our memory begins to fade away from the Cole Trickles, Tim Richmonds and others we saw at the Track Too Tough To Tame, our Frontstretch experts were challenged to determine the best 12 drivers in NASCAR. Without further ado, here are Power Rankings: Darlington…

It’s been a while since Bobby Hillin Jr has been in the Power Rankings conversation. Oh, wait…

Anyway, the Candyman has struck again. He not only struck the wall several times at Darlington. Kyle Busch also struck gold after claiming the aforementioned regular-season championship a week before the regular season even ends. Can Busch cap off an impressive season with a win at Indianapolis? Time will tell, but Indy has often been a hit-or-miss track for the 34-year-old.

Channeling his inner DW, Hamlin put on one of the most ridiculous pair of shades we may have ever seen at a race track this decade (sorry, Noah Gragson). The No 11 driver was on quite the six-race streak. Since Kentucky back in July, Hamlin has picked up two wins and has had an average finish of 2.33, that is until he got to Darlington. Yet, with many NASCAR TV personalities have continued to call Hamlin “the hottest driver in NASCAR.” He might be finally ready to close the deal.

Did you know that you could have won an arcade game during the Southern 500? With this latest in Busch Beer’s slew of promotions, a lucky fan could have walked away with the new ‘Big Buck Hunter’ arcade unit. We might want to go and check Ricky Stenhouse Jr‘s, Kyle Larson‘s, or Denny Hamlin’s motorhome because there is a strong possibility that it may have ended up there.

Well, I guess we got sidetracked, so good job on a fourth-place finish Kevin Harvick!

Now that is an unpleasant image Brad…

All jokes aside, I’m terrible at picking out my own clothes. Good thing I normally have @PaigeKeselowski and @IkeBehar

Strangely, Truex didn’t make a lot of noise at Darlington. With only two stage points and a finish outside the top 10, the guy with a gazillion home tracks may have been a little sleepy behind the wheel. He should have used that 5 Hour Energy sponsorship to good… use…ohhhh… forgot about that.

And the award for the best throwback unveil goes too…

While Clint Bowyer may have stolen the show as usual during NBCSN’s rain delay coverage, Larson had a rather…um…interesting segment with Hamlin. Despite Larson’s antics(???), he did make a studious proclamation that every person who is not a night owl wanted to hear…

With one of the most interesting throwbacks we’ve seen in the five-year history of throwback weekend, Kurt Busch wheeled his 1969 Chevrolet Camaro SS to a seventh-place result, which is quite impressive for a 350 cubic inch 5.7 liter V8. Its a shame a few little 3.5 liter V6 2018 Toyota Camrys beat him.

Who could forget when Ken Squire created yet another one of his endless famous phrases. And just like that, “That Jones Boy” stuck. Yet few would realize that approximately two years after the catchphrase stuck, That Jones Boy would be standing in victory lane at 2:00 a.m. at the very track Squire got his inspiration from. In a very opportune time, Jones has now captured the first NASCAR crown jewel victory of his career.

That Jones Boy is a crown jewel winner!

Million-dollar Bill’s son will have to wait until next year to reattempt to bring the Elliott name back to victory lane. However, NASCAR does head to Indianapolis this weekend, and there, he will have another shot to bring his family name back to victory lane at Indy. He even has experience being in victory lane at the United States’ most famous race track. Do you remember that little brown-haired boy next to the No. 9 in 2002?

.@chaseelliott is ready and waiting to hit the track! pic.twitter.com/FiVLOCMKPw

And the winner of the best hair contest in NASCAR? Nope, that’s not Michael Waltrip.